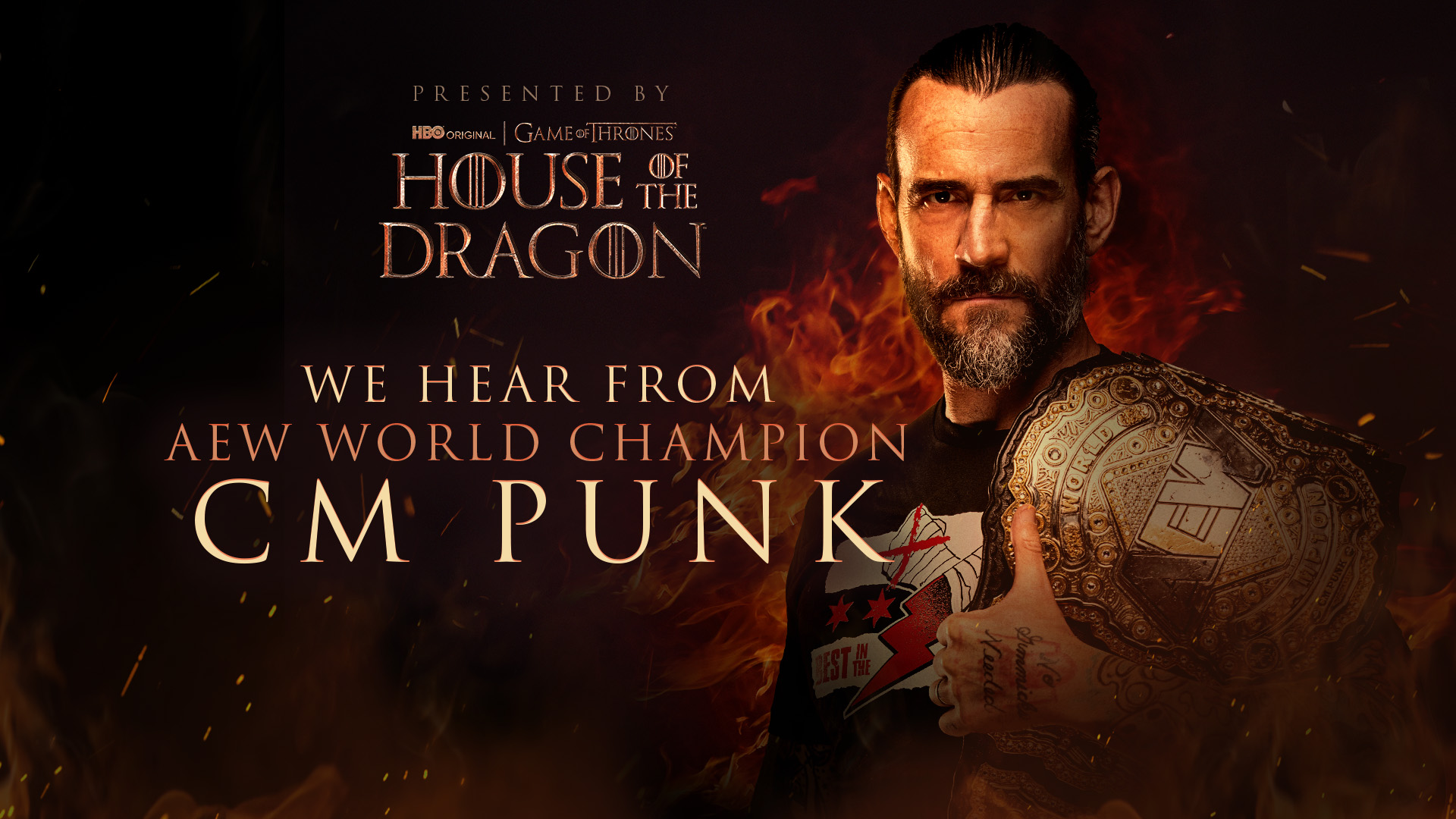 
This week's AEW Dynamite was sponsored by HBO's upcoming series- House Of The Dragon. The opening video montage ties AEW together with clips of the series. With the All Out pay-per-view inching close, plenty of developments were expected from this episode. It also marks the 150th overall episode of AEW Dynamite.


Promo of the Night | CM Punk and Jon Moxley


CM Punk was taking no prisoners when he came out to a packed house in Charleston. He had his game face on, but the overwhelming reception from the cheerful crowd made him break character and smile. It was a precious sight, and soon enough, Punk made his preferences known by issuing a rematch to the former AEW Champion, Adam Page.


Punk was disappointed with Page, as he did not step up to the night's challenge. The Chicago native then shifted his attention to unattended business. He made sure that everyone recognised who was the "real" AEW World Champion.


He did not waste time riling up the interim AEW World Champion, Jon Moxley. When Moxley did not come out, Punk chose to do what he does best and played mind games with provocation.


Punk called Moxley out for always being the third-best wrestler in all his wrestling factions. Then Punk called his real-life friend, Eddie Kingston, the second-best Kingston and the third-best Eddie he had shared the locker room with in his long wrestling career. The champ went further when he said Jon wouldn't even be the first Jon/John who he would beat in Chicago for a championship unification.


All this was too much, and finally, Moxley came out with his interim AEW World Championship. Jon disregarded Punk's trademark pipe bombs and claimed Punk was doing what he does best by letting his mouth write checks that his body can’t cash. Moxley questioned Punk's fighting spirit and said everyone knows that he only came to AEW because he ran out of money.


Both men threw their belts away. Both of them could not wait for All Out as they traded blows. Security personnel came out to separate them, but they just wouldn't stop.


Match of the Night | Daniel Garcia vs Bryan Danielson


This 2/3 fall contest was a test for both men as Garcia had earned an ungenerous victory against Danielson in his comeback match with the help of Jake Hager. Chris Jericho was on commentary, and we were in for a technical showdown. Both men matched one another's grappling efforts, with neither being able to outmatch the other. AEW went to a commercial.


We return with Danielson hitting a running dropkick and attempting a cross-arm breaker, but Garcia is sharp in counters, so the former has to apply a modified Regal stretch instead. Garcia uses the ropes for the break and recovers rapidly to suplex Bryan out of the ring. He brings Danielson inside and plants him in the middle of the ring with a beautiful-looking piledriver. A dragon sleeper follows, and Danielson is knocked out cold, awarding the first fall to Garcia.


Garcia keeps up the intensity taking advantage of the first fall, uses the corners to land chops and then performs a running dropkick similar to the one he received earlier in the bout.


After another commercial, we return to the ring to see Danielson bleeding. The veteran uses a roll-up reverse for getting the second fall of the match to even things at one each. Bryan traps Garcia into a tree of woe and kicks him enough to get him for a German suplex. A missile dropkick then sends Garcia flying on the outside. The two engage in a tug of war over a post. Danielson suffers the worst from it. He makes it difficult for himself by making a strenuous effort to beat the referee's count at nine!


Another return from the commercial shows Danielson gaining control. He prepares to kick Garcia's head in, but Garcia reverses it to deliver Danielson some of his own medicine. When it looks like Danielson has taken some stomps to the head, he breaks the sequence to pull Garcia into his LeBell Lock. Garcia fights a losing battle and eventually gives up handling the victory to the BCC member.


In the aftermath, Danielson, impressed by Garcia, offers him his hand in a show of respect. But a sulky Jericho drops Danielson from behind and starts to attack him. Garcia, offended by his leader's actions, pulls him apart to protect a helpless Danielson, and the two JAS members engage in an unpleasant verbal confrontation. Jericho leaves with agitation against Garcia.


To kick off the AEW Trios Titles tournament first-round matches, we had the La Faccion Ingobernable members Andrade, Rush, and Dragon Lee facing the Young Bucks with their long-teased mystery partners.


Fans half expected "Hangman" Adam Page to be the third man of the team going forwards in the Trios tournament, but that idea was scrapped in the latest Being the Elite YouTube episode. Now, without Hangman, there was only one man worthy enough to partner alongside one of the best tag teams in this business, and we finally got the long-awaited return of Kenny Omega as the third man partnering up with Matt Jackson and Nick Jackson.


The return eclipsed the in-ring events as fans were overjoyed to see the Cleaner in action. "Welcome Back" chants echoed around the Charleston Coliseum. Omega had returned to perform after an absence of nine long months. He still wasn't at a hundred per cent. To compete with his recovering ailments, he donned a black shirt with a shoulder brace, along with his regular gear. Throughout the chaotic main event, Kenny fought against some accumulated ring rust.

In an exclusive post-match segment, Kenny was honest enough to address his shortcomings during the match and expressed gratitude towards the Jackson brothers for carrying him in this one. He promised that he was adamant about doing better. He was still motivated to change the wrestling world with The Elite.