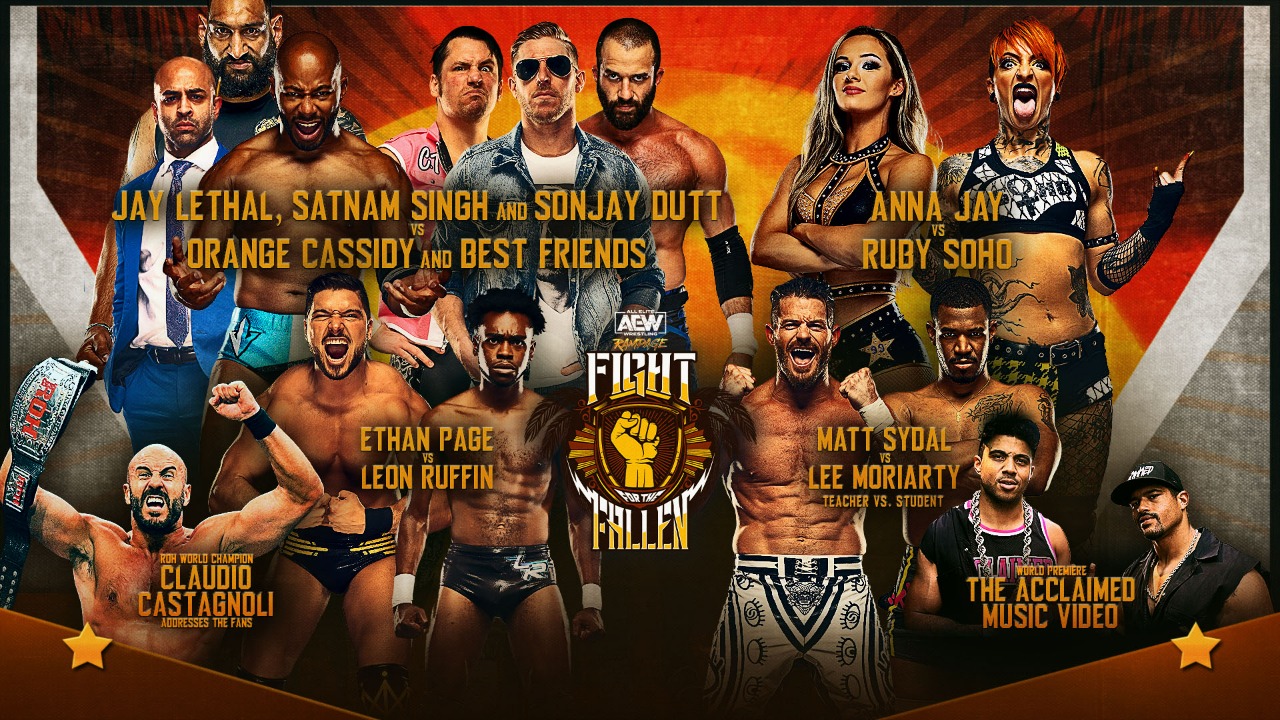 AEW Rampage- Fight for the Fallen


Jay Lethal and Trent locked up to start the show with both men going for early roll-ups and pinfall attempts that ended in a stalemate. When Orange Cassidy tagged in and immediately called out Satnam Singh, Lethal tagged in Sonjay Dutt instead. Cassidy did his usual comedy spots before docketing in Satnam Singh, who man-handled Freshly Squeezed.


The rest of the Best Friends ate a double crossbody while Jay Lethal flagged back in. The heels continued to trade tags and cut Orange Cassidy off, keeping him away from his tag team partners. Chuck Taylor got the hot tag and belly-to-belly suplexed Lethal. Trent and Chuck combined to inflict some damage on Satnam Singh before hugging him in the centre of the ring.


Lethal hit a double Lethal Injection, but OC hit a tornado DDT to bring out Sonjay. Cassidy hit an Orange Punch earning his team the victory. The heels beat down Orange Cassidy, but Wardlow came out to a great ovation and stared down at everyone.


This was a fun opener, especially the bit between Chuck Taylor and Jay Lethal. Satnam Singh is still quite awkward in the ring, and his timing and footwork need tremendous improvement. The comedy bit between Cassidy and Sonjay felt out of place. Wardlow got a loud pop. The idea of him against a veteran like Jay Lethal is worth a fight.


In a rematch from AEW Dark: Elevation, Ethan Page took on Leon Ruffin. Page clubbed Leon in the corner and tossed him around in the ring. All Ego continued to trash talk as he rag-dolled his opponent. Ruffin used his pace to escape some of Page’s offence, but Page caught him and delivered the Ego’s Edge for the win.


Ethan Page is under-utilised in AEW. And considering some of the absentees in recent weeks, he could have gotten better direction. Page’s facial expressions were great, and he looked emphatic. Ruffin didn’t get any offence in, which worked well for the story of this match.


The competitors shook hands, but Lee Moriarty wasted no time unloading on his mentor as he suplexed Matt Sydal after a few clubbing blows. Sydal hit a jumping knee strike to get Moriarty on his knees and hit a spinning heel kick followed by a running drop kick in the corner. Sydal delivered a Meteora on the outside, but Moriarty tossed him into the ringside barricade before hitting a Big Boot.


Moriarty remitted elbows to the back of Sydal’s head inside the ring and proceeded to work on his left shoulder. Sydal blocked Moriarty and hit a Roundhouse Kick, but the latter responded with a lariat as both men crashed to the mat. More knees to Sydal’s midsection, but he hit a Lightning Spiral for a close near fall.


Stokely Hathaway made his way towards the ring and distracted Sydal as he perched on the top rope. Moriarty got a very close near fall after planting Sydal’s head into the mat and locked in the Border-City stretch for the win.


Moriarty continues to impress every time he’s given an opportunity. Stokely recruiting him adds more legitimacy to his character. He displayed a few heel-ish tendencies towards the end. The crowd was behind him at various points during the match but seemed confused after he won because it wasn’t a babyface win. Sydal was excellent and crisp as ever.


Claudio Castagnoli walked out to loud ‘You Deserve It’ chants. He thanked the crowd in multiple languages before cutting a babyface promo. He called out fellow BCC member Wheeler Yuta to the ring, but before the ROH Pure Champion could say anything, Chris Jericho walked out of the commentary booth. He got the crowd to chant for the BCC members again before Yuta asked him to shut up.


Yuta claimed he can beat Jericho, but the latter was confident to fight. Yuta asked Claudio, Regal and the crowd if he could beat Jericho, and everyone answered in the affirmative. Jericho lost his cool and challenged Yuta, which the youngster refused. The former Y2J put his title shot against Jon Moxley on the line, which was enough for Yuta to accept.


Claudio probably should have gotten a little more time on the mic. Yuta showed great confidence on the mic, but the segment went slightly longer for what it meant to accomplish. The stipulation is interesting because if Yuta wins, he will be up against a fellow BCC member.


Anna Jay went for a brutal kick, but Ruby Soho dodged disaster before the women locked up. Soho had Jay in a side headlock and got an early two-count with a roll-up. Soho hit a knee to Jay’s face, but the latter blocked her in the corner and delivered a vicious kick to the former WWE star’s injured hand.

The new JAS member continued to attack Soho’s arm and elbowed her in the corner for a two count. She attempted to make a comeback, but Jay caught her in an armbar and took the cast off her arm. Soho tried to fight back, but her injured arm wouldn’t allow her to get any momentum.


She finally delivered a side suplex as both women collapsed on the mat. Jay tried attacking the injured arm, but Soho remitted multiple headbutts and got a near fall with a back heel trip. The latter fought out of the Queenslayer and delivered a No Future for a near fall. She went to the top rope, but Jay rolled out of the senton. She locked in the Queenslayer again, this time with the cast and finally got the win.


This was a great showcase for Anna Jay’s character. She looked vicious and dominant. Her body language was firmly heelish, and she did a great job attacking Soho’s arm, even if the moves were repetitive. Her in-ring work still needs a lot of polish and crispness as some of her moves look too choreographed and slow. Soho was great as an underdog here and sold well for her opponent.


On paper, this seemed like a special episode of Dark or Elevation. There is a noticeable lack of big names on Rampage recently, but the action was solid if unspectacular. Moriarty and Sydal had a fine television match, and the main event added much-needed momentum to Anna Jay’s development as a freshly turned heel. Yuta and Jericho’s exchange on the mic was fun and added a fascinating match for Dynamite.

Five MLS defenders to watch in the 2022- season