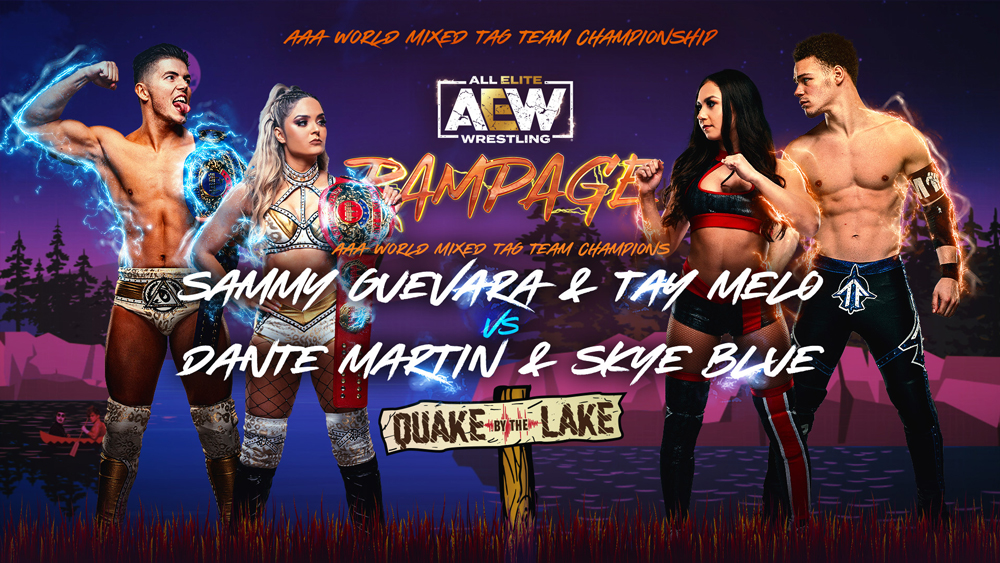 Welcome to the review of AEW Rampage: Quake by the Lake. The Friday night special from All Elite Wrestling featured the American Dragon Bryan Danielson while several matches were announced for the show.


Bryan Danielson kicks off the show


Following his defeat to Daniel Garcia in the main event of AEW Dynamite, Bryan Danielson addressed the crowd, stating that he would never quit professional wrestling and that nobody could end his career. Daniel Garcia showed up and vowed to end the former WWE Champion’s career and become the greatest technical sports entertainer in the world. Danielson was visibly annoyed by the term sports entertainment and put over Red Death as a potential young talent.  Before leaving the ring, he questioned Garcia if he wanted to be the best professional wrestler or the finest sports entertainer.


This was an astonishing segment preceding what should be a sensation two out of three falls match. Garcia seems set to join the Blackpool Combat Club at some point, and his mic work was better in this segment. Danielson was incredible as always.


Dante Martin and Sammy Guevara started in a heated fashion as the former unloaded hard rights on the latter. Dante chopped Sammy against the ropes, but Tay assisted her husband and tagged herself. Skye Blue tagged in and immediately hit a huge crossbody. The women traded slaps, but Tay outwrestled Skye and captured her in a neck crank.


Skye fought and hit a double knee strike against the ropes before hitting an enziguri. Sammy tripped Skye, allowing Tay to hit a pump kick as the show headed into the commercial. Upon return, Skye hit a step-up enziguri and made a hot tag to Dante, who took down Sammy and hit a dropkick. Dante hit a suicide dive on the floor but was a distraction from Tay, but Dante used Tay as a launchpad to deliver a destroyer to Sammy. Sammy hit a jumping knee strike and went for a GTH, but Dante fought out and tagged in Skye. Tay hit a thrust kick and a TayKO for the win.


This was a fun match, with the crowd popping for it at the right parts. Sammy and Tay are easy to dislike, so the heel schtick works perfectly for them. Skye Blue stuck out like a sore thumb in this match as her wrestling showed why she needs more reps before having fights on national television. The action between Sammy and Dante was crisp and high octane, as one would expect


After having his name taken, Sonny Kiss received a fantastic pop. Parker backed Sonny into a corner right away by acting aggressively. Parker stopped Sonny's brief offensive run and won the match with a modified uranage and a choke slam.


This was a squash match to get Parker over as a monster at the expense of a popular roster member. Parker is All Elite, so it’ll be interesting to see how he develops following his failed run in NXT.


The Gunn Club vs Danhausen and Erick Redbeard


Austin Gunn tried to sneak attack Erick, but the giant shoulder tackled him, and the Gunn Club left the ring. Danhausen tagged into a huge pop, but Austin clubbed him as the heels took control with the show heading into commercial. Danhausen made the hot tag to Redbeard, who hit a huge dropkick on Colten. He tossed Austin over the top rope and hit a running crossbody on both of them on the outside. He delivered a spinning heel kick, but Colten broke up the pinfall attempt. Erick hit a double suplex and tagged in Danhausen. A low bridge from Billy allowed Austin to hit the Fameasser on Danhausen for the win.


Danhausen was super over with the crowd. The match was just about okay. Billy scolding his boys seems to be leading up to the Gunn Club moving up the tag team ranks, and that’s an intriguing direction.


After some initial comedy, the match got underway. Daivari ate a dropkick but returned with a neck breaker on the ropes as the show headed into commercial. Daivari drove Cassidy into the mat as he maintained control. OC fought out of a sleeper hold and backed Daivari into the corner. Both men took each other out as OC drove Daivari face-first into the turnbuckle.


Daivari went for a superplex, but OC shoved him and hit a diving crossbody. Daivari delivered a devastating midsection kick and a running neck breaker. A suplex attempt was met with an answer from OC, who then followed it up with a thrust kick. In response to an Orange Punch, Daivari spiked OC for a close call. Before OC's Orange Punch ended the contest, he nailed a DDT and another DDT from the top rope for a near fall of his own.


Orange Cassidy is one of the AEW attractions, so him having to struggle this hard to beat Ari Daivari doesn’t make much sense. The match was fine but very skippable, with the result never in doubt. Sonny Kiss turning on OC to join the Trustbusters is something.

Manchester City, Arsenal, and Aston Villa win big in the second week of the Premier League