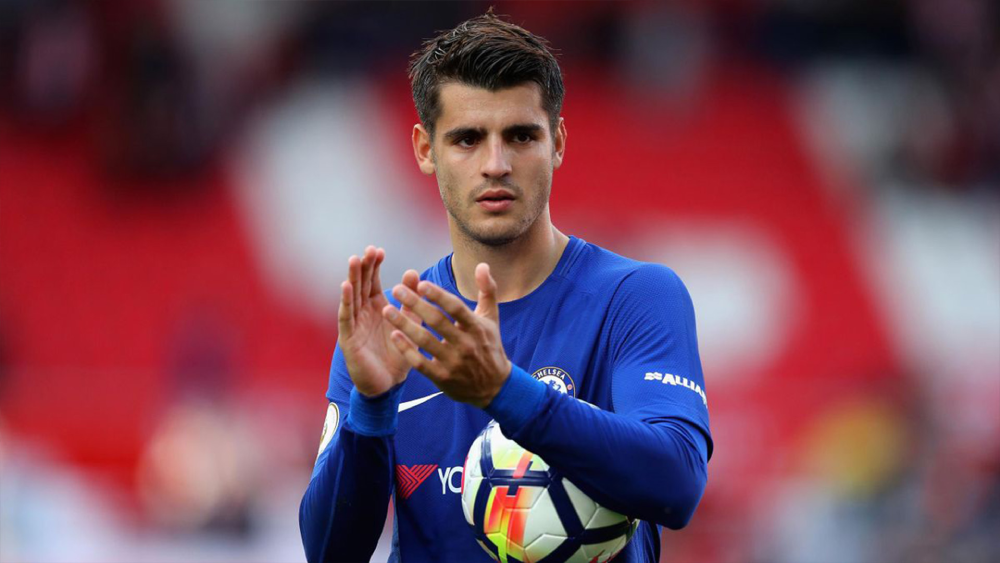 
In the football world, there is a running joke that Alvaro Morata is a "money-laundering scheme" because he is being transferred around by some of the top teams in Europe despite his underwhelming performances.


However, it is very harsh on a man who has won so much, including two Champions Leagues, two Serie As, and 56 Spanish caps. He may not have been the most clinical, but there is more to the 29-year-old striker that many like to overlook.


As a young star who looked up to Raul, Alvaro participated in the youth programmes of both Madrid clubs, beginning with Atletico, where he stayed until 2007 before joining nearby Getafe. It was a successful season for the Spaniard, who managed to secure a move to Real Madrid the following year, entering the C Team and then being promoted to the Castilla side in 2010, following a great two years of individual performances.


He played in Spain's third division at this time, getting his first taste of senior football, and he adapted to it like a fish to water, scoring 41 goals in 77 games.


Because of these performances, he sporadically made first-team appearances for Real Madrid - despite not scoring, he was still given 12 games in the 2012-13 season, scoring twice and announcing his name as a future star at the Santiago Bernabeu.


In the 2013-14 season, he was given more opportunities under Carlo Ancelotti and repaid the Italian boss with nine goals in all competitions, including one on their run to ‘La Decima’, the club’s tenth Champions League title.


From Madrid to Turin


In the summer of 2014, Juventus announced a €20m move for the Real Madrid prodigy on a five-year deal, with the Spanish club having a buy-back clause in his contract. This signalled that the club felt the striker had the potential to be world-class. In a club such as Juventus, he will have the opportunity to grow and develop his style in a competitive league, in a team that wins trophies.


Fifteen goals in all competitions followed, with ‘The Old Lady’ reaching the 2015 Champions League final in Berlin, where they, unfortunately, lost 3-1 to Barcelona, who completed their second treble.


However, he scored in the championship game to tie the score for the Italian giants. His five goals in that edition’s Champions League put Morata on the map as one of Europe’s hot prospects.


He wouldn’t quite hit the same heights in the next season, however, with 12 goals in all competitions, only two of them in Europe, but that didn’t stop Vincente Del Bosque from calling him up for the 2016 UEFA European Championships in France.


The Spanish National Team was beginning a transition period following their disappointing performance at the 2014 World Cup after being eliminated in the group stages. Many of the 2010 World Cup champions were not chosen for the team, instead substituted with youth, with Alvaro Morata most likely being David Villa's replacement.


He scored three goals in four games, including a brace against Turkey to send Spain through to the round of 16, where they met their fate against Italy as Morata lost to some of his club teammates 2-0.


After his impressive displays in France, Real Madrid activated the buy-back clause in the deal with Juventus to bring him back to the Bernabeu.


With Zinedine Zidane at the helm, Morata wasn’t preferred over Benzema or Ronaldo at the striker spot. Although in limited minutes, he scored 20 in 43 appearances in 2016/17, including 15 in La Liga as they romped to Champions League and league double-he averaged a goal in the league every 88 minutes.


More clubs were aggressively after him after this clinical news. And since he was no longer a starter, he considered his choices elsewhere, believing he could now finally assume the role of being the attack's focal point for any European club.


Chelsea and Manchester United were both looking at him or Romelu Lukaku to bolster their attacks. And when ‘The Red Devils’ opted for the Belgian, Chelsea swooped in with a club-record transfer fee of €70m to bring Morata to Stamford Bridge.


Hailed as one of the best signings of the summer, many thought Morata could emulate prime Fernando Torres and bring Chelsea a back-to-back league title. And it started swimmingly for the Spaniard, who scored and assisted on his Premier League debut against Burnley in a 3-2 loss on the opening day of the season.


Three goals and two assists in five games going into the Stoke City match would have had everyone thinking that he was going to be a hit, even more so when he subsequently bagged a hat trick at the Britannia Stadium to bring his tally up to six goals.


Four more goals followed until January when a drop of form started to show, and injuries and misses began to paint a good transfer as one of the worst as he only scored once more in the latter half of the 2017/18 season.


A change of manager saw Maurizio Sarri come in for the outgoing Antonio Conte for the 2018/19 season, a season rife with embarrassment for Chelsea – unfortunately, Alvaro Morata became the face for jokes.


It became clear that Sarri's confidence in the Spanish striker was fading as Giroud and Higuain started ahead of him more frequently. His poor performance and embarrassing misses reduced the number of minutes given to the player who couldn't seem to get a break. Football fans began to brand him as one of the worst strikers in the league.


The career of the once-desirable striker in Europe changed over a year, and it was quite upsetting to witness how attackers with poor confidence can suffer because they are powerless to overcome it.


Luckily, at the end of the season, Atletico Madrid offered a lifeline with a loan move to the Wanda Metropolitano under Diego Simeone.


Lifeline in Madrid and Turin


He was back where he started as a kid, under one of the world’s best managers and playing a league he had already had success.


Joining on loan in January 2019, he scored six in 15 La Liga games for Simeone’s side. This was sufficient to persuade the club to spend £56 million to make the relocation permanent.


He became a lot more involved in the build-up and became a focal point in the attack of a very defensive system. He was the man for Atleti in the final third, and he would thrive and regain some form to muster up 16 goals and five assists in the 2019/20 season - averaging a goal contribution every 133 minutes.


However, Juventus approached Atleti to take the Spanish international on a two-year loan deal, and the club accepted. He returned to his old stomping grounds in Italy to try and help the club retain the title.


He once again showed his well-rounded style at Juventus, impressing as a goalscorer and provider in a year that was lacklustre for the Turin club, who shockingly missed out on the title to Inter Milan and finished 4th, one point in front of Napoli.


Morata racked up 20 goals and 12 assists for Andrea Pirlo’s men, which meant he was the second most productive attacking player, behind Cristiano Ronaldo with 38 contributions - The Spanish striker averaged a contribution every 88 minutes, a return to form for sure.


2021/22 wasn’t so impressive, as Juventus showed even worse form than previous as they once again finished fourth in Serie A, going trophyless for the first time since the 2010/11 season.


However, compared to last season, Alvaro's 12 goals and nine assists in all competitions were few and far between. He wasn't the only player to perform poorly that year.


The two years were very productive for Morata. He found his feet again and showed Europe why he is one of the best all-around strikers on the continent. His output showed he was a threat and convinced Atleti to keep him for the 2022/23 season, where he already has two goals in as many appearances.


A brace against Getafe got Alvaro off to a terrific start to life back in La Liga, whilst a defeat against Villareal followed. His finishing has improved dramatically as his poacher side of his game came out on an opening day as he played on the shoulder of the defender and was ready to receive the ball from Felix, Saul, or anyone in the midfield.


Even though everyone likes to make fun of him and say he's a conspiracy theory, this once-desired striker continues to play at the highest level and is depended upon by one of Europe's top managers. He demonstrated his actual quality with a fantastic curled effort from the edge of the box and a near-post finish.


His statistics from the previous season demonstrate the type of player he is: 1.73 key passes per game, 2.29 passes that result in shot attempts, 17.38 pressures per game, 27.02 carries per 90, and 1.02 tackles per game demonstrate that he is one of Europe's most complete packages - he is imaginative, decisive, hard-working, technically proficient, and eager to participate in the defensive side.


He is a striker who is more than capable of playing at the top level, he may not have the clinical nature of a striker, but for what he lacks in that, he makes up for his all-round game.


It’s about time we stopped branding this man as a ‘money laundering project’ and respect him for what he is - a top, well-balanced striker.