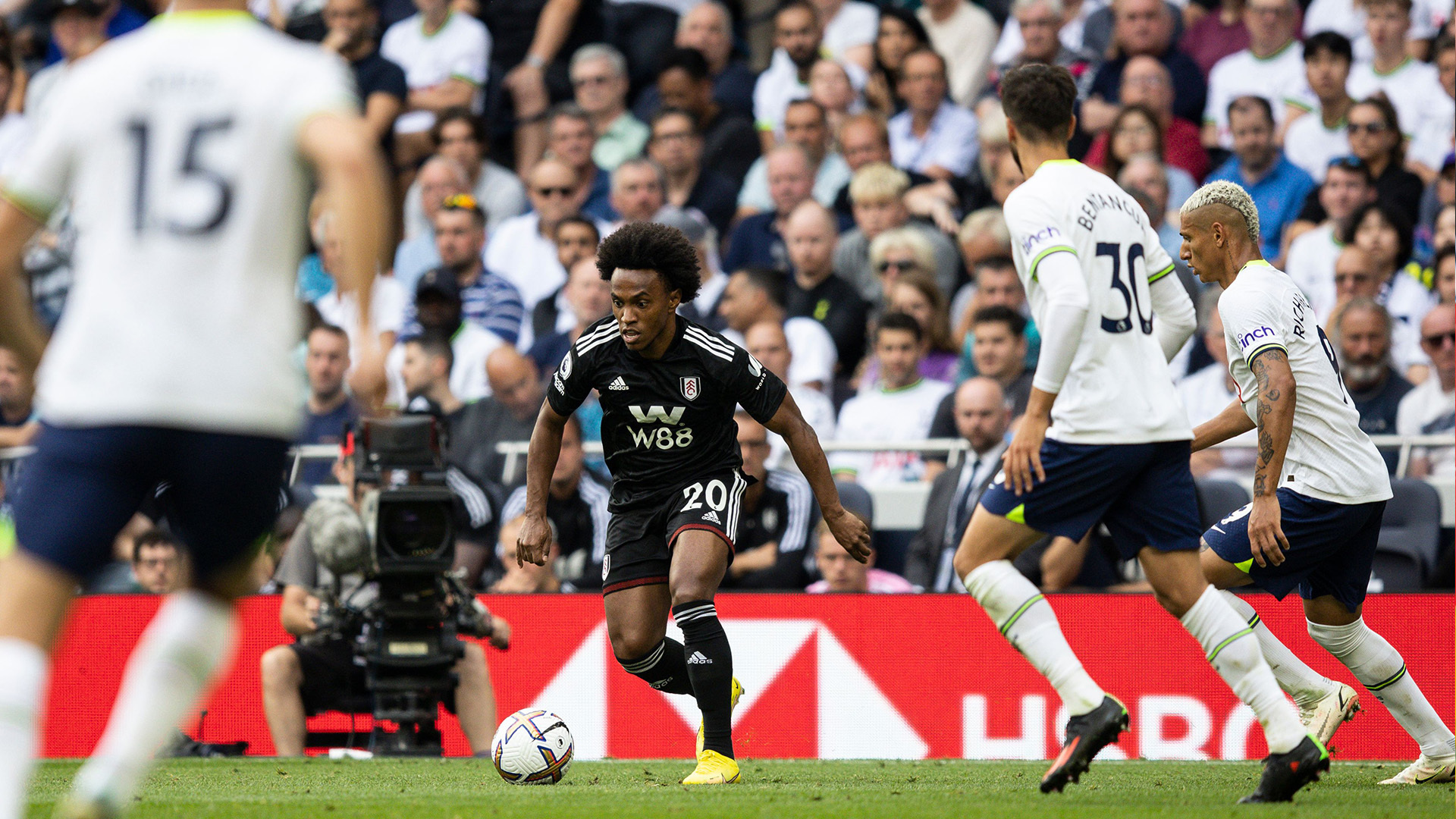 
This was the marquee clash of this weekend. The two teams are on an upward swing, backed by progressive, young managers. Arsenal, of course, was coming off a hotter streak. Four wins in four and playing some delectable football. Manchester United had dusted off the dirt from their Brighton and Brentford humblings. While short of extraordinary, their performances against Liverpool and Southampton were strong enough to suggest that something had changed. United's new signing, Antony Matheus dos Santos, was starting this game. Erik ten Hag was clear that Antony gave his team a unique option from the right wing. Arsenal was fielding almost the same team from their midweek game against Aston Villa. Oleksandr Zinchenko replaced Kieran Tierney.


The match started with predictable intensity. Both teams built their play from the back and pressed opposition defenders high in their attacking third. Bukayo Saka and Gabriel Martinelli made threatening runs past United's full-backs in the early exchanges. It has been a weekend of controversial VAR decisions, and this match would be no different. In the twelfth minute, a through-ball from Saka sent Gabriel Martinelli through on goal, which the Brazilian duly buried into the net. VAR ruled out the goal because of Martin Odegaard's foul on Christian Eriksen in the build-up. United recovered well from that scare. They began playing between Arsenal's defensive lines. Soon, Eriksen found Bruno Fernandes with a lovely ball into the final third, which eventually went through Sancho and Rashford to roll into the feet of an onrushing Antony. Cue: goal on debut against Arsenal.


The first half ended 1-0 to United, but Arsenal was well and truly finding their rhythm. They were rewarded for their perseverance in the 60th minute when Bukayo Saka picked up a loose clearance from Diogo Dalot and placed the ball into the net. 1-1, with half an hour to play. United shifted into counter-attack mode, sitting back in compact blocks, denying Arsenal much space to run into. As Arsenal pushed harder, Eriksen was again at the centre of United's build-up. He received the ball in space and split Arsenal's midfield with a first-time pass to Fernandes, who raised Eriksen's effort with an incredible outside-of-the-boot pass through Arsenal's centre-backs. Marcus Rashford is as fast as anyone else on the pitch, and he had no problems running onto that through-ball and finishing past Aaron Ramsdale. Mikel Arteta changed Arsenal's formation within five minutes, substituting three attack-minded players for two defenders and a defensive midfielder. His team would pay for that sudden change in structure. Gaps opened up all over their defensive lines, and United was again able to penetrate through them in transition. This time, Bruno found Eriksen in acres of space behind Arsenal's defenders. He ran through on goal and squared the ball for Rashford to make it 3-1. Game, set, and match.


In many ways, both managers had enough to be proud of. United passed the ball much better through midfield, and Arsenal showed industry during their dominant phases.


Tottenham Hotspurs continued their brilliant start to the season after winning 2-1 against Fulham on Saturday. They started the game on a high tempo, attacking Fulham's defence and goal with every opportunity they got. And when the direct approach met a brick wall, they pushed and pulled at the Fulham defence by passing the ball around their box. Then, late in the first half, Pierre Emile Hojberg slotted home a neat goal to give Spurs the lead going into half-time.


The second half saw more attacking football from Spurs, with their wing-backs constantly running forward and rotating positions with wide-forwards. Ryan Sessegnon was a menace to handle, switching overlapping runs with some clever runs into the box to give Son attacking passing options. One of his runs led to a penalty box scramble, which Kane eventually capitalised on and doubled the lead. Mitrovic gave the home team a minor scare with a wonderfully taken goal in the 83rd minute, but Antonio Conte's team were too compact in defence to allow anything else from Fulham.


Wolverhampton Wanderers finally got their first win of the season against Southampton at home. Daniel Podence's neat finish was the only goal of the match. Coming into the game, Wolves had shown glimpses of good form and shape, especially against Spurs, but didn't have enough points to show for it. Southampton was coming off an incredible victory against Chelsea.


Matheus Nunes was a lively presence for Wolves, running in the half-spaces and disorienting the compact Southampton defence. His run down the right and ball for Podence was worthy of any highlight reel. Merely a minute later, the match also saw a tragic moment. New signing Sasa Kalajdzic injured his knee and had to be substituted off. What was considered a minor knock at that time turned out to be an anterior cruciate ligament tear. It was a double-blow for Wolves, as Raul Jimenez was injured too in the warm-up.


Aston Villa and Manchester City couldn't have walked into Villa Park in more different moods. City was flying: four wins out of four, Erling Haaland already on nine goals. Villa had four losses out of five on their report card. Steven Gerrard was under tremendous pressure, and it showed in his interviews. He needed something, anything, against the best team in England right now.


Manchester City started with customary control. They held the ball well, had runners going past Villa's defenders, and midfielders finding them with passes. Kyle Walker should have put them in front early in the first half but fluffed his lines. Aston Villa settled into a deep block, inviting a heavy City crowd in and around their box, but somehow managed to get to half-time on level terms. The second half saw two goals. First, from a sumptuous Kevin de Bruyne pass for Haaland to score his tenth goal of the season. The goal might have had KdB's stamp all over it, but Haaland's propensity for being at the right place at the right time is ominous for other teams. After the goal, Villa opened up a little and began playing through City's lines. In the 74th minute, after a scramble near the box, Leon Bailey scored a lovely goal to make it 1-1. Then, in the 80th minute, after a play inside the City box, the linesman flagged Aston Villa for offside, and Coutinho curled in the now dead ball for a goal. More minute checks revealed that the decision should have gone to VAR. It was a significant moment in the game, and Aston Villa were dealt a raw deal. Gerrard was justifiably miffed about it in his post-match interviews, mostly because he sensed that was a rare chance of getting all three points.


Alex Mac Allister shone the brightest on Sunday afternoon. He called the curtains on a strong Brighton performance against Leicester with an equally incredible free-kick into Danny Ward's net. On a day where Leicester briefly threatened in the first half, going ahead, Brighton responded with characteristic gusto. Kelechi Iheanacho's early goal was soon levelled through a Luke Thomas own goal. Before Leicester could breathe, Moises Caicedo had put Brighton ahead. Patson Daka put Leicester level at the half-hour mark, but that was the extent of Leicester's silver linings on Sunday.


After half-time, Mac Allister hit a powerful shot past Ward, but VAR ruled out the goal. It was, at best, a contentious decision which shouldn't have overturned a goal. However, Brighton didn't let the incident deter them. After the hour mark, they scored twice in ten minutes, first through Leandro Trossard and then through a penalty by Mac Allister himself. In the final moments of the game, Leicester gave away a free-kick around 25 yards from their goal. Mac Allister stepped up and put a glorious bow on a sunny afternoon.


Nottingham Forest came into this match expecting to make light work of a Bournemouth team going through turbulence. With Cheikhou Kouyate's header and Brennan Johnson's penalty, they entered half-time 2-0 up, hoping for a big win to set their season on track. As it turned out, Gary O'Neill's Bournemouth had other ideas.


Bournemouth came out flying in the second half. Philip Billing scored a thunderbolt to make it 2-1; Dominic Solanke's clever finish inside the box levelled the score ten minutes later. At that point, Bournemouth was in control of the tempo, threatening to even find the winner. Forest dropped their press, got back a semblance of control and looked good for at least going away with a point. But, in the 87th minute, Solanke was again a thorn in Bournemouth's flesh. He ran into space and crossed the ball for substitute Jaidon Anthony to make it 3-2. It was a stunning comeback from a team searching for stability after a tumultuous few weeks.