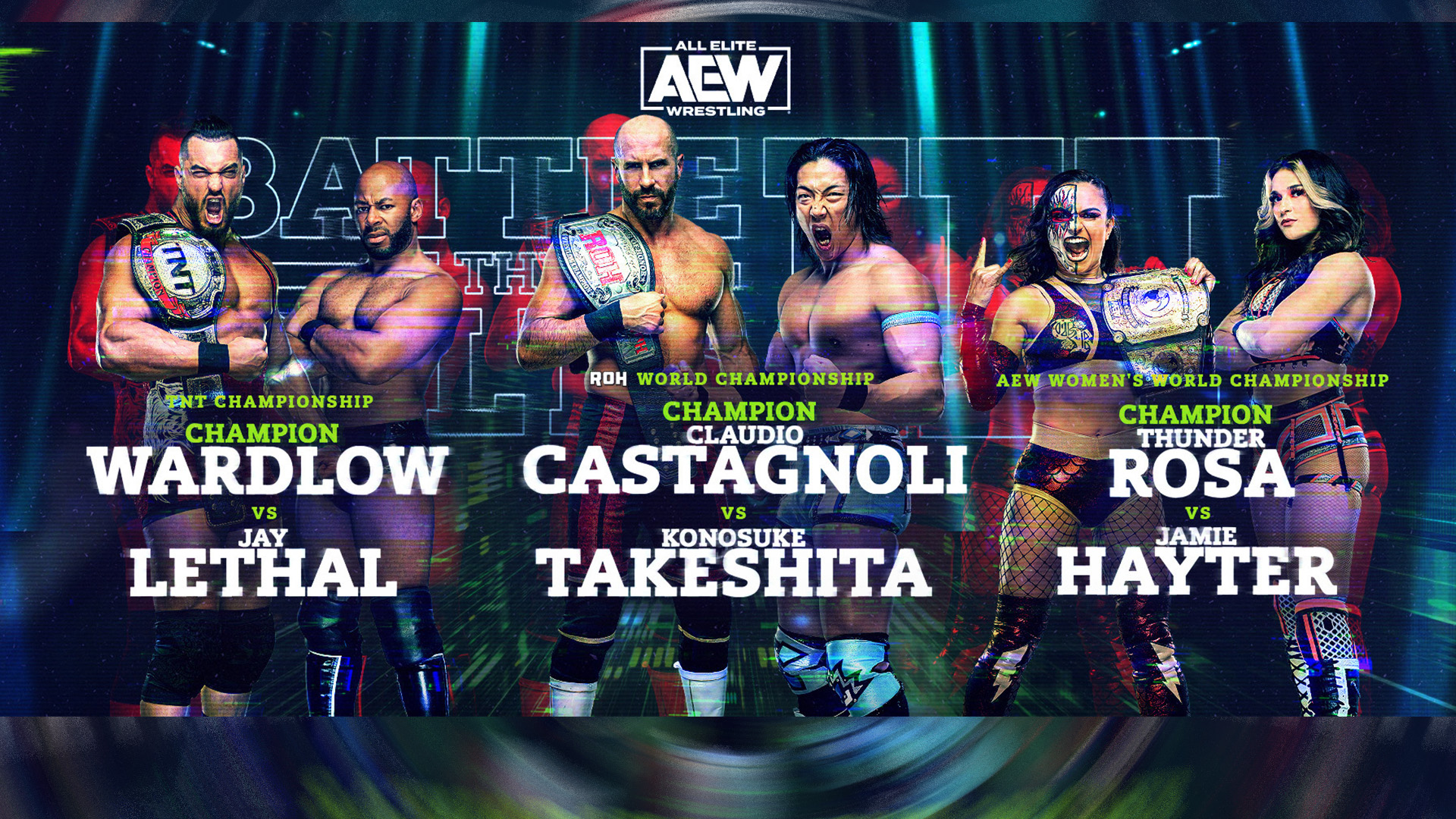 AEW Battle of the Belts 3 emanated from the Van Andel Arena in Grand Rapids, Michigan. The show saw Tony Schiavone, Excalibur, and Jim Ross in the commentary booth. With three matches lined up for the event, the episode was intoxicating.


Wardlow vs Jay Lethal for the TNT Championship


Wardlow got the Goldberg chant as Jay Lethal took his time to get to the ring, consulting Sonjay Dutt and Satnam Singh at ringside. Lethal hit an early suplex, but Wardlow no sold it and booted Lethal in the face before hitting a huge back body drop. Satnam and Wardlow got in each other’s faces allowing Black Machismo to take control. Lethal dropped Wardlow to one knee with an enziguri, but a tilt-a-whirl slam earned the champion a two count. Wardlow shrugged off a couple of dropkicks, and Lethal shammed an injury, getting a near fall with a roll-up.


An overzealous Wardlow missed his move and crumbled at ringside, allowing Lethal to hit a suicide dive. Lethal worked on Wardlow’s left knee as the show headed to its first commercial. Back from the commercial, Lethal went for a figure four, but Wardlow somehow countered to get Lethal on his shoulders for a powerbomb. Lethal fought back and went for a Lethal Injection, but Wardlow caught him for a vicious headbutt and a lariat. He finally delivered the powerbomb to win and retain, but Dutt attacked him, followed by Satnam and Lethal attacking the TNT Champion.


Wardlow fought back and nearly delivered a powerbomb to Satnam, but Lethal avoided disaster, and the heels put the former Pinnacle member through a table.


This was a surprisingly short match which sort of hurt it. Lethal is a tremendous worker, and a prolonged battle would have been advantageous for Wardlow. The post-match aspect was the segment's main focus, and a Satnam vs Wardlow battle, which would be quite the show, may be on the horizon.


Jamie Hayter vs Thunder Rosa for the AEW Women’s Championship


Jamie Hayter wasted no time in going after the champion, dropping swift shots on her head. Britt Baker got in a few cheap shots with the referee distracted as Hayter continued to club the Mexican. An explosive snap suplex inflicted more damage on Rosa, and Hayter beat her down against the ropes. Rosa hit a couple of dropkicks, forcing Hayter to roll to the outside, but Hayter cut off a suicide dive attempt and rammed the champion into the ringside barricade.


Back inside the ring, Rosa took control, but a distraction from Britt Baker allowed Hayter to deliver a backbreaker on the ringside steps before the show headed into commercial. Rosa drop-shipped an elbow strike, and Hayter repaid the favour as both women got in a slugfest. But a Northern Lights Suplex earned Rosa a near fall. Rosa hit a rolling senton off the ring apron onto the floor and headed to the top rope. A diving crossbody led to another near fall as both women struggled to get on their feet. Hayter got a two-count off a back breaker and dropped Rosa with a brainbuster for another near fall. Toni Storm stopped Britt Baker from interfering as they traded moves at ringside, and Rosa barely pinned Hayter with a roll-up.


A mammoth showcase for Hayter implied that she is a strong candidate to become the next women’s champion. The match was hard-hitting, and Hayter got numerous opportunities to show her incredible strength. The finish was fortunate for the champion, and La Mera Mera may lose the title soon. Hayter will shortly become the champion.


Konosuke Takeshita vs Claudio Castagnoli for the ROH World Championship


Both men shook hands to get the main event underway. The match got off to a fast start as both men countered each other’s offence. Claudio caught Takeshita in a headlock as the latter tried to fight out of it. Claudio continued to outmuscle the challenger as the champion tossed Takeshita into a monkey flip. An early ‘this is awesome’ chant broke out as a highly technical contest ensued.


Takeshita hit a hip toss as both men locked up for the nth time and tried to outmanoeuvre each other. Takeshita hit a leg lariat, forcing Claudio to roll to the outside. After pursuing him, Takeshita struck him with a powerful elbow and rolled Claudio inside the ring. Claudio took advantage of Takeshita’s hesitation and delivered a backbreaker to take control as the match headed into the commercial.


Claudio stayed on top as he attacked Takeshita’s upper body, but the latter fought back with a hurricanrana and hit a flying clothesline. Takeshita went over the top rope and floored Claudio, but he delivered a leaping forearm to Takeshita and hit a gutwrench off the top rope for a near fall. Cesaro signalled for the swing and executed it successfully for another near fall. Takeshita reversed an Irish whip and hit a blue thunder bomb for a close near fall and planted Claudio’s head into the turnbuckle before delivering a turnbuckle DDT and a frog splash for a near fall.


Takeshita went for another flying clothesline, but Claudio caught him with an uppercut and locked in the Sharpshooter. Takeshita rolled through, but Claudio caught him in a cross face. Claudio ate a couple of German suplexes and then a lariat but still kicked out at two and a half. Takeshita hit a knee strike and brainbuster combo, but Claudio refused to stay down for the three counts. Takeshita’s lower back damage didn’t allow him to hit the Cinna bomb, and Claudio took advantage by delivering a diving uppercut.


Claudio went for a Ricola Bomb, but Takeshita countered into a roll-up for another near fall. Claudio delivered a Death Valley Driver out of nowhere as both men collapsed to the mat. Claudio remitted hammer and anvil elbows before hitting the Ricola Bomb for the win.


What a sensational main event. Takeshita is going straight to the top, and Claudio is well, Claudio. The action was crisp and hard-hitting, the false finishes were excellent, and the crowd got on their feet multiple times. Despite losing important matches, Takeshita is raising his profile, while Claudio has yet to miss in his AEW career.

Nathan Byrne heads to the MLS with Charlotte FC