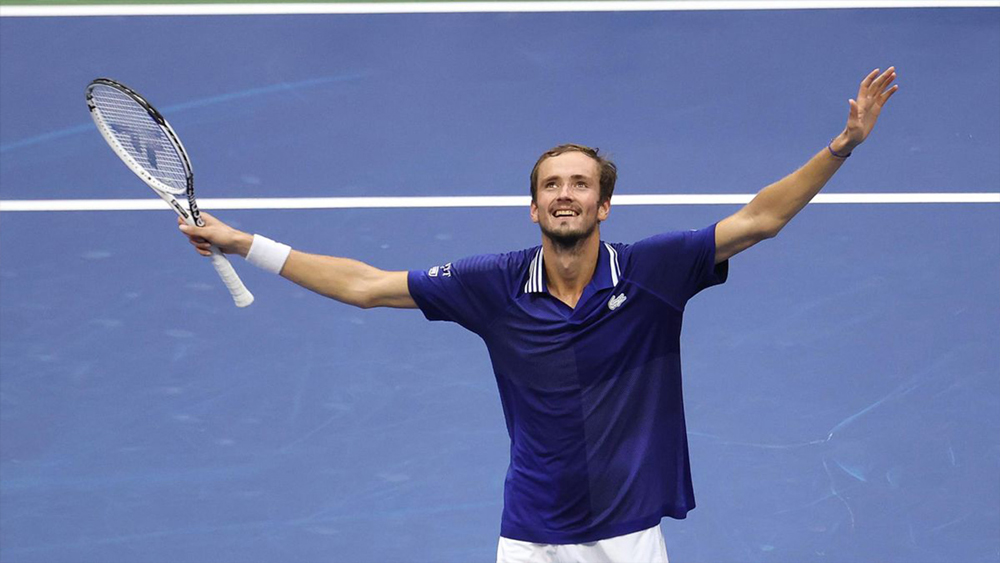 John McEnroe has watched a lot of tennis. From the time he started playing, he must have observed half a century’s worth of tennis players at the highest level. Played against two decades’ worth too. McEnroe calls Daniil Medvedev his favourite player to watch amongst the current generation.


At the onset, that declaration comes off as odd. Medvedev? Over Tsitsipas’ power, Zverev’s precision? Liking Medvedev is fair, of course -- he is the current world number 1 -- but marking him out as a favourite amongst a host of seemingly more gifted athletes doesn’t quite sit easily. McEnroe goes further. He thinks of Medvedev as a chess player who “thinks two, three steps ahead.” Alexander Rublev, Medvedev’s compatriot, backs McEnroe up. “He reads the game well,” Rublev said. “It’s amazing, the patience he has to stay so long in the rallies, to not rush, to take the time, because in the end these little details, they make him who he is.”


Last week, Medvedev completed 250 career singles wins after beating Rinky Hijikata 6-4, 6-3 in the round of 16 at the Los Cabos Open. Over the next few days, Medvedev wrapped up the title without dropping a set or a bead of sweat. In the final, he breezed past Cameron Norrie 7-5, 6-0.


Winning the Los Cabos title would have meant a lot to Medvedev. Athletes like him don’t stop to click pictures when they cross milestones. There is always bigger fish to fry. But this year, the title means so much. He entered 2022 as a Grand Slam winner and was two sets up against Nadal at the Australian Open final. Then he was barricaded from a marquee event because of political events beyond his reach. As the entire Western consciousness went up in arms against Russia’s invasion of Ukraine, the All England Club responded by banning Russian and Belarusian players from competing at Wimbledon.


The omission would have hurt even more because Medvedev has developed a multi-surface aspect to his game. Endurance, power, and agility have never been a problem. Over the last year or so, he has added a bite to his repertoire. On grass, facing an opponent who can defend against speed but hit back hard at odd angles is a minor nightmare. Besides, Medvedev was coming with a significant tailwind.


In November 2020, he reached London for the ATP Tour finals as prospective fodder for either Nadal or Djokovic. Over the next week, he beat both of them and world number three Dominic Thiem to win the title. Medvedev followed that up by going on a run of eighteen consecutive singles wins. Back home, in Russia, he won the ATP Cup after beating Alexander Zverev. It took a Novak Djokovic masterclass at the Australian Open finals of 2021 to halt that train.


After this stretch, Medvedev was no longer another figure in a line of hopefuls hoping to sneak into a Grand Slam semi or final. He was the real deal. A Grand Slam title felt inevitable. And when it came, it was barely believed what he had done. At the US Open finals of 2021, facing an opponent who had won the three previous slams of the year and seemed near invincible, Medvedev played the perfect underdog-at-a-final game. Except, he never went into a defensive shell like before. Medvedev defended when he had to but was willing to attack whenever the opportunity presented itself. By the end, Daniil Medvedev had beaten Novak Djokovic 6-4, 6-4, 6-4.


Considering Daniil Medvedev had never gone beyond the third round at a major junior tournament and never reached the top of the rung, a Grand Slam victory is as amazing as it is surreal. He was atop the world rankings within a few months from the US Open. By all accounts, he wasn’t supposed to reach this height. But Medvedev doesn’t quite believe in sticking within linear boundaries.


In a time when every top player relies on an aggressive style of tennis, Medvedev has faith in the defensive pillars of his structure. He draws out a rally over time and then stretches the court with shots at improbable angles. Outside the court, he eats like an Olympic swimmer, eschewing all received wisdom about tennis players regulating their diet.


At fourteen, he read Eragon by Christopher Paolini in three nights. The magical and fantastical universe contained in those pages fascinated him. Correlation never implies causation. That said, this theme of going beyond imposed limits is a motif that’s evident across the canvas of Daniil Medvedev’s life.


In the same vein, Stefanos Tsitsipas calls him an octopus. And that seems like a great way to leave a discussion on Daniil Medvedev. He gets to places where he isn’t supposed to. Most tennis players, if not all, would give an arm and leg to have that reputation.

Graham Potter – can the progressive head coach work his magic yet again?