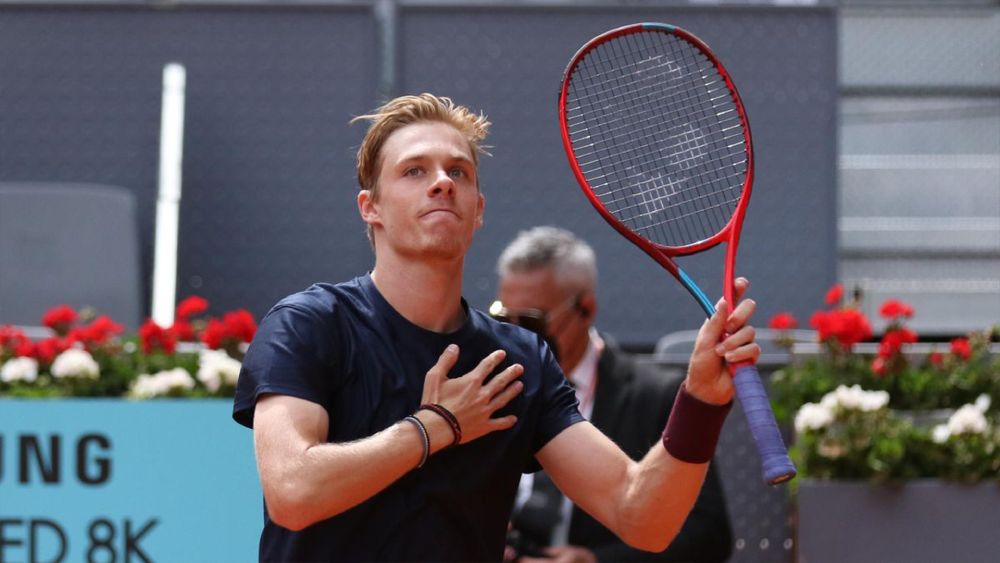 Denis Shapovalov, an Israeli-born tennis player, who is now rated number 23 in the ATP rankings, has what it takes to rise to the top because of his captivating game. And he is only just beginning.

Being coached by his mother shows that maybe tennis was always in his blood and that becoming a top player was his destiny. He began playing at the ripe age of five at the Richmond Hill Country Club – it was only a matter of time until Shapovalov was obsessed with the sport. Relentless hours with his mother and the progress began to show. So much so that his mother, Tessa, left her job and opened her tennis academy. Denis would thrive in this environment as it was somewhere to train and a place where he would eventually become a mentor to the younger tennis players.

As he entered his teenage years, his mother would go on to hire a coach and former tennis development manager, Adriano Fuorivia, to aid his development. A relationship that prolonged over four years, they managed to compete and gain numerous junior and ITF futures titles in both singles and doubles events.

His junior career success exceeded all expectations, which saw his progression into professional tennis come quickly but not as a shock. The now 23-year-old hit a career-high position of number 10 in September 2020 but has not improved on this ranking since.

2017 was his breakthrough year – his Grand Slam debut, first Masters semi-final, and top 50 debuts. An impressive feat all in one year. However, it didn’t go to plan to start with his Davis Cup cameo short but not very sweet as he was disqualified for unsportsmanlike behaviour after his frustration got the best of him. Murmurs arose over his suitability for the professional standard of tennis.

In March of this year, he won his fourth ITF Futures singles title and his first ATP Challenger title – safe to say he silenced those who had doubts. Denis went on to defeat the likes of Juan Martin del Potro and Rafael Nadal to become the youngest player to reach an ATP World Tour Masters 1000 semi-final. He then entered a period of struggle where he would shock the world but lose to an easier opponent. Despite this, he won his first-ever Wimbledon match against Jeremy Chardy.

His up-and-down career continued in the Auckland and Australian Open at the beginning of 2019; nevertheless, this year turned out to be phenomenal. The 2019 Davis Cup came home to Canada (for the first time!) as he teamed up with Vasek Pospisil to defeat some of the tops, top teams. 2020 was ending, and after some uncertainty, his fantastic Italian Open performances saw him enter the top 10 for the first time. In 2021, Denis managed to find himself in his first Grand Slam semi-final – he faced defending champion Novak Djokovic but unfortunately lost in straight sets. Before the 2022 season, he tested positive for COVID-19 and didn’t get off to the best start.

A positive start saw Canada win their first ATP Cup title after Denis and Auger-Aliassime carried the team with singles wins. An upset against third seed Alexander Zverev in straight sets saw the Canadian progress into his first Australian Open quarters. Apart from outstanding performance and victory against Rafael Nadal in the Italian Open to reach the quarterfinals, the rest of 2022 has been below par by his standards.

Along with Milos Raonic and Eugenie Bouchard, the tennis star has done their all to get Canada on the map. The combination of his distinctive style and his rapid success in the world of tennis has made Canada proud. The exceptional player stunned the world when he became the youngest contender to enter the top 30 since 2006.

With a win rate of 54.4% in ATP Tour and Grand Slam main draw matches, some improvement is required before he can rub shoulders with the stars and be hailed as the crème de la crème. He shares a likeness to Petra Kvitova due to his style and temperament on the court, and his consistency is a primary concern. His results, however, tend to vary and may hinder his ability to smash through that ceiling. His playing style is influenced by his ability to attack. For the neutral fan, he is a joy to watch as he never tries to control the game. Instead, he will always opt for the high-risk, high-reward strategy. An all-around brand of explosive tennis as his driven forehand strokes complements his single-handed backhands; a shot he is known for.

Unfortunately for Denis, his aggressive nature means many unforced errors, which may limit his ability in the foreseeable future. A lot can change in tennis, and if he finds himself in a rut, he may find it too difficult to find a way out.

With his strong-willed moments and his unexpected, unconventional victories, his approach has been compared to a breath of fresh air. He is one to keep an eye on. In his timely short career, it has been evident that his ability to win games in big moments shines through at the most vital moments. Doubt remains over his ability to produce these moments of magic over a sustained period. Still, for now, we will continue to watch on the edge of our seats as the Canadian continues to enthral tennis fans and players across the globe with his no-holds-barred brand of tennis.