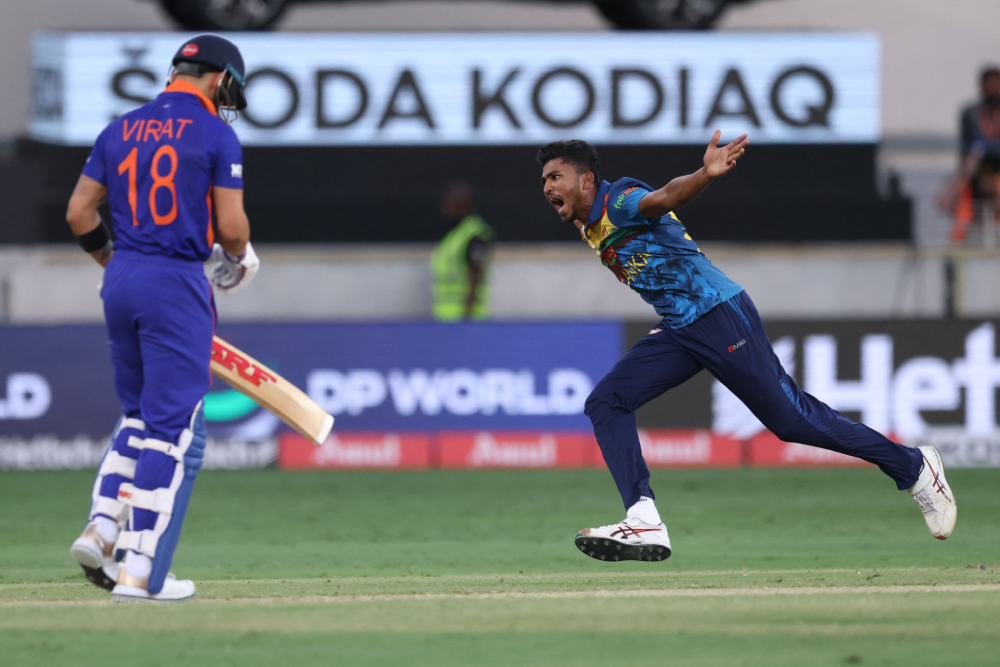 
At the last World T20, held in the UAE itself, Pakistan and New Zealand surgically took apart the Indian T20 team's foundations. Even though dew and toss played a part, India looked so far behind the eight-ball that a substantial change in setup was not just necessary but par for the course. BCCI started by shuffling the team management. The new coach and captain were clear in their vision that India played too meekly for this format. There needed to be a more fearless, progressive approach by the batters.


Ten months, a bunch of bilateral series, and a significant multi-nation tournament later, the change in batting approach is evident. At this Asia Cup, India batted with bravado and took the attack to the opposition in the powerplay. Of course, they still want one of their top-order batters to play along innings, but it doesn't have to be at ODI tempo. Against Pakistan in the first Super Fours game, Rohit Sharma and KL Rahul scored 54 runs in the first five overs. Losing that match must have been a punch in the gut after such a start. More importantly, it turned Tuesday's game against Sri Lanka into a near must-win.


Sri Lanka won the toss and decided to bowl first. This was an ideal test for India to see if they had learnt their lessons from the Pakistan game. While the start wasn't as breezy, with KL Rahul and Virat Kohli departing without spending much time at the crease, Rohit Sharma and Suryakumar Yadav gave India a formidable platform to launch from. At the end of the 12th over, India was 109/2. Rohit had scored a sparkling 72 off just 40 balls. He kept up the tempo even after the first two wickets, and his brave batting was a sight for sore eyes against the Sri Lankan spinners in the post-powerplay overs. When you consider the batting talent waiting in the sheds, India should've set a minimum target of 80 runs from the final eight overs, taking their score to 189. Instead, they managed 173, and that too, thanks to Ravichandran Ashwin's six in the penultimate ball of the innings. Rishabh Pant, Deepak Hooda, and Hardik Pandya, this team's finishing engine in the absence of Dinesh Karthik, scored 37 runs off 30 balls between them. Two days previously, they had scored 30 runs off 28. Dilshan Madhushanka, playing just his fourth T20I, conceded four runs in the 19th over while picking up the wicket of Pant and Hooda. In the powerplay, he had made a mess of Kohli's stumps. Some performance in a crunch game.


India began their bowling innings well. Bhuvaneshwar Kumar and Arshdeep Singh got substantial movement in the air. A couple of balls jagged enough to square up the Sri Lanka openers. The first three overs only yielded seventeen. We could call it the calm before the storm, but it was instead the steady drip before the floodgates were held ajar for them. Rohit took out Arshdeep from his end and brought on Hardik.


Because both, Pathum Nissanka and Kusal Mendis were right-handers, Rohit couldn't use Deepak Hooda for a couple of handy powerplay overs. That reduced his bowling options. It was a curious call to change Arshdeep's end after such an excellent first over. Hardik conceded ten, and the Sri Lanka batters got the push they wanted. Rohit also had to protect Bhuvaneshwar's overs because he and Arshdeep were his only death-overs options. So Arshdeep was brought back and summarily carted for 18 runs, all but one of them by Kusal Mendis. Rohit responded by bringing on Yuzvendra Chahal, who was then taken for 12 runs. 57 runs in the powerplay, and Sri Lanka was cruising.


The following five overs cycled between Pandya-Chahal-Ashwin, and the runs kept coming, if at a slower pace. Both batters were looking good to repeat Babar Azam and Mohammed Rizwan's chase in the World T20 last year. Then, in the 11th over, Chahal tossed the ball up high and slow and winkled out two wickets in four balls. Nissanka fell to a reverse sweep, and Charith Asalanka, suffering from a terrible dip in form, hit Chahal's leg-spinner too hard and found Suryakumar Yadav at fine leg. India tightened the pressure even more with the wickets of Gunathilaka and Kusal Mendis within the next three overs. Two new batters were in, and the required run rate was at 10.5 runs per over in the last six. Bhanuka Rajapaksa and Dasun Shanaka were almost the perfect pair to wade through the choppy waters. And by this time, it was too late to try Deepak Hooda. India had to finish with their five bowlers.


For a moment, consider the same juncture in the Indian innings. At the beginning of the 15th over, India had Suryakumar Yadav and Hardik Pandya on the crease. With 118 runs on the board, 190 was still a reasonable target. Shanaka removed Surya with his second ball and came back in the 18th over to get Hardik. The pressure created by wickets slowed India down, and Madhushanka duly capitalised on Hooda and Pant's indifferent form. Shanaka was Sri Lanka's sixth bowler, covering for Asitha Fernando's bad day out. India didn't have an equal for Shanaka, the bowler or the batter.


With the bat, Shanaka was a calm presence in the middle of mounting tension. He allowed Rajapaksa to play his big-hitting game and just kept the tempo at this end. With three overs to go, Sri Lanka needed 33. In 2022, that's deep in the gettable territory. With one over from Bhuvaneshwar and Arshdeep left, India had to turn to Hardik Pandya. Shanaka capitalised with a four and a six. Rohit went for the more experienced Bhuvaneshwar for the nineteenth over, possibly to shrink the game as much as possible, but paid heavily for that choice. Bhuvaneshwar bowled two wides and conceded consecutive fours to Shanaka to put the game almost out of India's reach. Arshdeep bowled a fantastic last over to bring it to 2 runs off 2 balls but missed throws from Pant and himself put the game to bed.


On Wednesday, Pakistan beat Afghanistan in a nail-biter and secured their spot in the final alongside Sri Lanka. To crash out of an Asia Cup, with all the resources India has, points to a familiar issue. India learnt one big lesson from the last World T20 and failed to learn the other: never go into a crucial game without a proper sixth bowler. It was so poetic that Sri Lanka's sixth bowler changed the game.