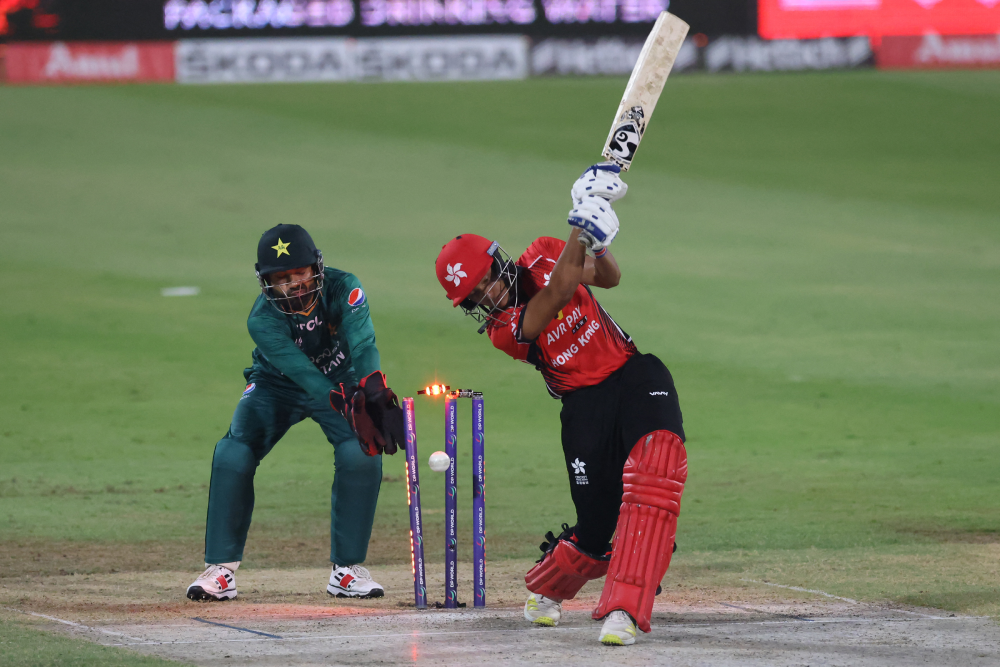 
On Friday, Pakistan beat Hong Kong by 155 runs to advance to the Super Fours stage of this year's Asia Cup. That jaw-dropping margin conceals a game of multiple phases, during most of which Hong Kong were worthy competitors.


Captain Nizakat Khan won the toss and decided to field first like he had done against India on Wednesday. He found the Sharjah pitch familiar. Nizakat expected his spinners to build the game. For the first ten overs, like against India, they did. Pakistan could only muster up 64 runs with the loss of Babar Azam's wicket. While they are not express starters, a total of six boundaries in the powerplay is probably stretching the definition of building up. It is also a good illustration of how disciplined Hong Kong’s bowlers were.


Hong Kong's three spinners bowl at different paces and lengths, and neither Mohammed Rizwan nor Fakhar Zaman could truly catch hold of them for a while. Ehsan Khan's fast off-breaks are apt for the powerplay, giving the batters no room or loop to hit through the line. Just as the fielders were allowed to spread wide, Yasim Murtaza's agonisingly slow left-arm spin forced both batters into playing for singles and doubles even when they stepped out. They denied the technically superior Pakistan batters the pace to hit and brought Hong Kong into the game.


The difference last night, however, was that Mohammed Rizwan played the sweep from very early on. He accessed the square leg and fine-leg boundaries at will. Even if the boundaries didn't come thick and fast, he reduced Hong Kong's line options. While batting first, Pakistan approach most of their T20 innings in three phases: build a solid base for the first ten overs, start pushing the accelerator between overs 11 and 15, and go full throttle for the last five overs. Rizwan and Fakhar's partnership got them a solid base to launch from.


Rizwan's six off Mohammad Ghazanfar on the fifth ball of the eleventh over signalled a shift in gears. For the next five overs, they went at ten runs per over. Rizwan was batting on 61 by now, and Fakhar Zaman duly completed his fifty with a huge six over deep midwicket in the 16th over. Given the batting talent, Pakistan was waiting to unleash. And the type of bowlers in Hong Kong usually finish an innings with, you could see sweat beads forming on Nizakat Khan's eyebrows. He brought back the incredible Ehsan Khan to finish his spell. Bowling the 17th and 19th over, Ehsan gave away only 17 combined runs and picked up Fakhar Zaman's wicket. His bowling has been one of the stories of this edition of the Asia Cup. The last over fell to Aizaz Khan. It started well with two dots, but Khushdil Shah carted the next four legitimate deliveries for huge sixes. Sandwiched between them was a desperate wide ball down the leg, which went for four. If their spin bowling is a shining light, they can get hurt by the number of extras given away. Eighteen is too big a number for ODI cricket, never mind T20s. Pakistan finished on 193-2. 29 runs off the last over; 129 from the last 10; 77 from the previous five. It was, in many ways, the perfect exhibition of gear changes.


While Hong Kong had used spin bowling as their lead, Pakistan came at them with a high pace. Naseem Shah began the innings with a wide down leg side for four but gave away only two singles over his first twelve legitimate deliveries. He bowled eight dots, had Nizakat Khan caught at point, and castled Babar Hayat in that time. Hong Kong's innings never really took off. And because this was a must-win game, they did not have the luxury of measuring their chase. They had to step on the gas from the get-go against a bowling attack as varied and skilled as Pakistan's. After bowling fast bowlers for five out of the powerplay overs, Pakistan introduced Shadab Khan in the seventh. He took two balls to knock back Aizaz Khan's stumps with a fast googly. From 25/3 after the powerplay, Hong Kong lost their next seven wickets for 13 runs within 28 deliveries. Shadab Khan's fast wrist spin and Mohammad Nawaz's radar-guided accuracy proved too much for them. Six of those seven wickets were either bowled or leg before wicket dismissals, displaying the potency of high-quality spin against a technically inferior batting unit looking to score fast runs. While the fast bowlers had made the inroads, Pakistan's spinners ensured Hong Kong would be unable to mount a revival.


Pakistan will carry a lot of confidence from this performance into the next round. They play India on Sunday.


38 all out paints a worse picture for Hong Kong than they deserved. This Asia Cup has been a story of incredible success for their team. They couldn't play a game of international cricket between February 2020 and June this year. For the last three months, they have been constantly on the road. At this time, some of the players have had newborns but are yet to see them. When they reached the UAE, they were an afterthought, not expected to qualify for the main draw ahead of the host nation. Three wins in three matches later, they were sending off-breaks past KL Rahul and Virat Kohli's bats.


At the toss in their first match, broadcaster Sanjay Manjrekar asked India captain Rohit Sharma a curious question. Do top teams have a different mindset while playing associate nations like Hong Kong? While there might be some truth to dropping intensities, especially under overhead conditions like in the UAE, Hong Kong addressed the rest of the question with aplomb. They made India and Pakistan stretch more than either team would have liked. And that, alone, makes them one of the triumphs of this tournament already.