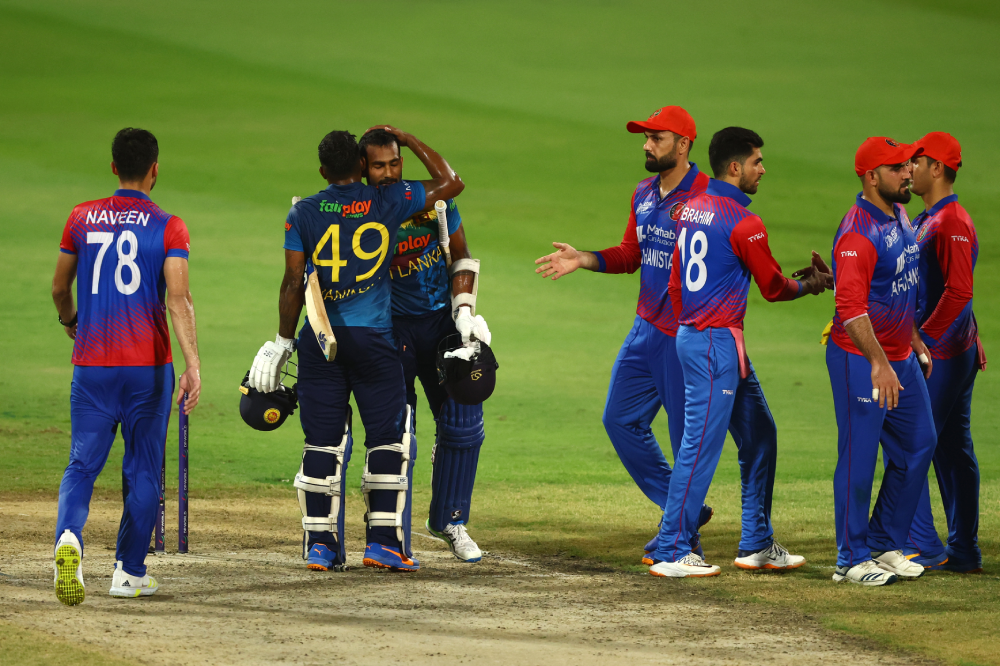 
The 7th March of the Asia Cup 2022 saw Sri Lanka face off against Afghanistan on the 3rd of September at the Sharjah Cricket Association Stadium, Sharjah. Sri Lanka, who won the toss, decided to bowl first and went with an unchanged playing Eleven from the last game. Afghanistan dropped Omarzai for Samiullah Shinwari.


Rahmanullah Gurbaz gave a promising start to Afghanistan in the Powerplay. However, the opening partnership was broken in the 4th over when Madushanka dismissed Hazratullah Zazai. Gurbaz continued to counterattack Sri Lankan bowlers and eventually played a crucial knock for Afghanistan, scoring 84 runs off 45 balls. Gurbaz and Ibrahim Zadran had a 93 runs stand between them, which allowed Afghanistan to finish 175 runs in 20 overs for the loss of 6 wickets. Dishan Madushanka took two wickets while Theekshana and Asitha Fernando bagged a wicket each.


Chasing a target of 176, Sri Lanka held their nerves to beat Afghanistan by four wickets in the Asia Cup Super 4 clash in Sharjah. Openers Pathum Nissanka (35) and Kusal Mendis (36) gave Sri Lanka a flying start, adding 62 runs for the first wicket. Kusal Mendis got them off to a flier in the powerplay. But the Afghanistan spinner took control of the proceedings, with Mujeeb Ur Rahman and Mohammad Nabi taking three wickets between them. Nissanka and Hasaranga added crucial runs. However, Danushka Gunathilaka (33) and Bhanuka Rajapaksa's (31) power-hitting swung the match back in Sri Lanka's favour. Rajapaksa played the clinching knock, and what a cameo that was. Sri Lanka completed the highest successful T20I chase in Sharjah!


A brilliant chase from Sri Lanka as they won this opening Super Four encounter! The target they were facing seemed to be a very challenging one, but they never let the rate go out of hand. Afghanistan's last five overs with the bat yielded only 37 runs, which was costly as their bowlers had an off day, especially Rashid Khan, who went for 39 in his four overs. They looked like they had an arsenal to defend on a dull pitch but failed to execute well. Dropped catches also cost them the game.


Sri Lanka gets a measure of redemption against Afghanistan after the opening game trouncing and they do it in style, completing the highest-ever chase on this ground and the highest-ever chase against Afghanistan in T20s. Afghanistan, though, will wonder what could have been after they had more than their fair share of chances to put the game to bed. First, their batters couldn't capitalise in the death overs, and then in the field, it was a mixed bag with extraordinary fielding. Sri Lanka won't mind though and this will give them a load of confidence going into the game against India on Tuesday.


Afghanistan will think of that lean patch near the 10-over mark where they did not score a boundary for 22 deliveries. Or maybe the fact that this was Rashid Khan's most expensive outing in UAE ever. A good turnaround for the 2014 Asia Cup and T20 champions to better their case for the final next Sunday. Afghanistan will now need to get the better of India and Pakistan to have a shot at the final match in Dubai.

Rory McIlroy: Why the Irishman is currently the best golfer in the world