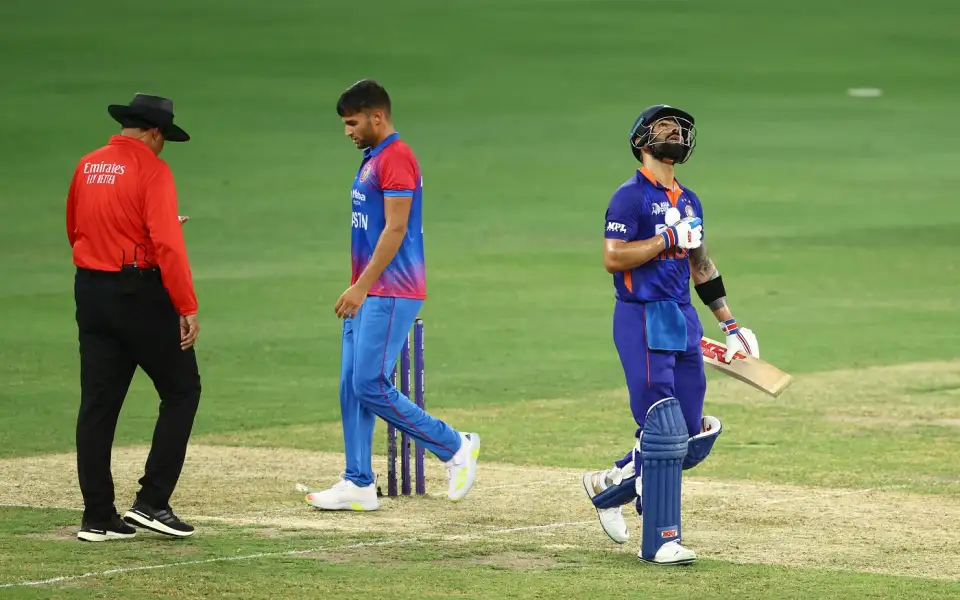 
After leading the table at the group stage, India went into the Super 4 with the tag of favourites to win the Asia Cup. Although, the first match of the Super 4 against Pakistan ended in a defeat, making the match against Sri Lanka a must-win. However, India fell short of a few more runs for Sri Lanka to chase down. Both sides were eliminated from contention to advance to the final after dropping their first two games of three. Therefore, India's third and final Super 4 encounter versus Afghanistan essentially served as a warm-up. The game was an absolute treat to watch, as Virat Kohli hit his first T20I century and 71st century in all formats, in what was a batting masterclass.

Afghanistan won the toss and invited India to bat at the Dubai International Stadium. KL Rahul was the stand-in captain. He opened the innings with former skipper Virat Kohli. Both the players aggressively started the innings. The pair added 52 runs in the first power play of six overs. Kohli and KL were equally aggressive in dealing with the swinging balls of Farooqi in the power play, as the pair built the foundation for what could be a mammoth total.

To make it an even contest, Afghanistan had the chance to scalp the superstar former captain early in the innings, who went on to score a ton, but Afghani players didn’t help themselves, as Virat Kohli was dropped at just 28 runs in the eighth over. From then onwards, it was raining fours and sixes from both ends. Kohli completed his much-needed half-century in the 11th over with a single off Omarzai in just 32 deliveries. KL Rahul wasn’t behind, as he too completed his half-century by hitting back-to-back fours off their captain Nabi. The opening partnership of 119 runs off 12.4 overs finally broke as KL Rahul got caught at long-on in the mindset of increasing the score to 62 off 41, which included six fours and two sixes. In comes India’s very own Mr. 360- Surya Kumar Yadav, he hit a six off the first ball over the keeper but got out the next ball as he hit the inside edge, which took the bails off the stumps. Rishabh Pant joined the attack with Kohli and got dropped by Mujeeb on nine runs. However, it didn’t matter much as Kohli took charge of the attack again, while Pant gave him company.

Kohli completed his maiden ton in the T20Is as he hit Fareed for a six! A much-needed century for Kohli to get some fans and the media off his back regarding his performances. Kohli kept being the aggressor and scored 122 off 61 unbeaten as India mounted a mammoth 213 as a target.

The target probably batted out the Afghanistan team. But the hopes of having a good start to chase down the target got dented as the opener Hazratullah fell to Bhuvneshwar Kumar for a duck in the opening over. His partner Rahmanullah soon followed him back to the pavilion, as he was bowled for a golden duck by Kumar in the first over as well.

As Janat was dismissed for two runs in the third over after being caught by Kohli in the slips, Kumar was wreaking havoc on the Afghan top order (4). The Afghan batting order was being swung back to the pavilion by Kumar. For a duck, Najibullah was the next victim. After the third over, Afghanistan was eased to 9/4.

Their captain, Nabi, was the next in line to come and go back without contributing much, as he fell for 7(7) through Arshdeep. Afghanistan was eased to 21/6, and there was no hope remaining. Afghanistan ended their innings at 111/8 in 20 overs, in which Zadran showed some fighting spirit as he scored 64 unbeaten off 59 with four fours and two sixes. For India, Kumar took crucial five wickets for just four runs! India won the match by 101 runs. Virat Kohli was named player of the match. As for the future, India would want better performances in the upcoming T20I World Cup and Afghanistan would hope to find solutions to their woes soon before the World Cup.