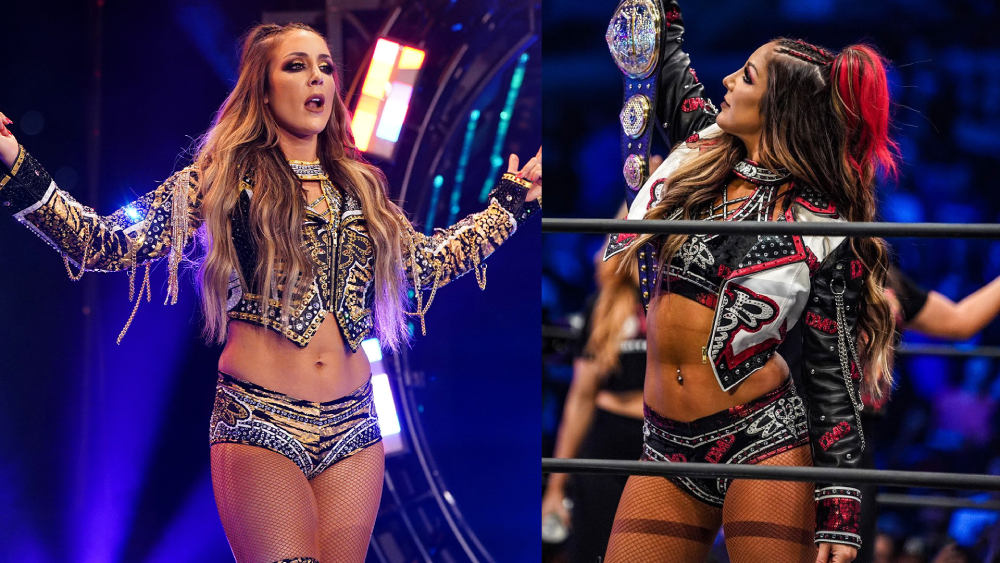 
Among everything AEW has done since its inception, one area where Tony Khan has been lacking is the women’s division. Despite having a decent crop of talent at his disposal, things haven’t been as good as they could have been. However, one of his biggest success stories has come from the women’s division in the form of Dr Britt Baker DMD.


Baker attended the University of Pittsburgh School of Dental Medicine from 2014 to 2018, during which she discovered her love for pro wrestling, officially debuting in 2015. This was one year after she began training at the International Wrestling Cartel training academy in South Hills, Pennsylvania, before transitioning to Absolute Intense Wrestling in Cleveland, Ohio, to train under fellow big names Johnny Gargano and Candice LeRae.


She wrestled for IWC for four years, becoming the inaugural IWC Women's Champion in December 2016 when she defeated April Sera, Marti Belle, and Sonya Strong in a four-way elimination match at the IWC Winner Takes All show. She held the title till July 2017, when she lost it to LuFisto. Her reign saw her defend the title against prominent current names such as Rachel Ellering, Chelsea Green and fellow AEW star Penelope Ford.


During her time in IWC, she made her debut for WWE when she was fed as fodder to Nia Jax in a squash match on Raw in Pittsburgh in July 2016. She wrestled in WWE twice after that, defeating Tesha Price in a dark match at the 2018 Mae Young Classic. A month later, she was an enhancement talent for Shayna Baszler on NXT.


She made history for AEW when she became the first contracted female wrestler for Tony Khan’s infant promotion before the company’s first show. At Double or Nothing 2019, she defeated Nyla Rose, Kylie Rae, and Awesome Kong in a four-way match. She formed a short-lived tag team with Riho, and their rivalry ended with the Japanese star defeating the dentist in an AEW Women’s Championship match. The first notable feud she had was with Big Swole, culminating in a Tooth and Nail match between the two at All Out 2020. It was a cinematic match which took place in the dentist’s actual workplace. However, it ended up being one of the worst pay-per-view matches in AEW history.


Shortly after, Baker moved on to bigger and better things. She grew into her character with Reba flanking her as her mic work improved. She began drawing heat, and on March 17 2021, she created history alongside Thunder Rosa as they became the first women to main event an episode of Dynamite. In an Unsanctioned Lights Out match, the two women tore the house down and boosted their stocks to unprecedented heights.


While Britt Baker lost that battle, she won the war. Her stock could not have been higher as it became apparent that she was being groomed as the face of the division and next in line to carry the title. Her crowning moment came at Double or Nothing 2021 when she defeated Hikaru Shida to capture the title. She then main event the first ever episode of AEW Rampage, defeating Red Velvet to a thunderous ovation in her hometown despite being a heel. In another feather in her cap, her main event AEW Dynamite: Grand Slam, in front of AEW’s biggest ever crowd at Arthur Ashe Stadium, defeated Ruby Soho to retain her title.

Her title defences included wins over Nyla Rose, Tay Conti, Kris Statlander and Riho. She reignited her iconic rivalry with Thunder Rosa, and despite retaining the first time, a steel cage match on Dynamite ended her long reign as champion. Despite losing the title, she continued to be the face of the division as she beat Maki Itoh, Toni Storm and Ruby Soho en route to becoming the first-ever winner of the Owen Hart Memorial Tournament.


She is involved in a heated feud with Toni Storm and Thunder Rosa, with the former scoring a rare singles win over Britt Baker at AEW Dynamite: Roa Rager. We could be headed for another title feud between Thunder Rosa and Britt Baker, with All Out looming as the star of Britt Baker refuses to die down. She’s one of the most improved AEW originals, and there’s no evidence to prove that her momentum is stopping any time soon.