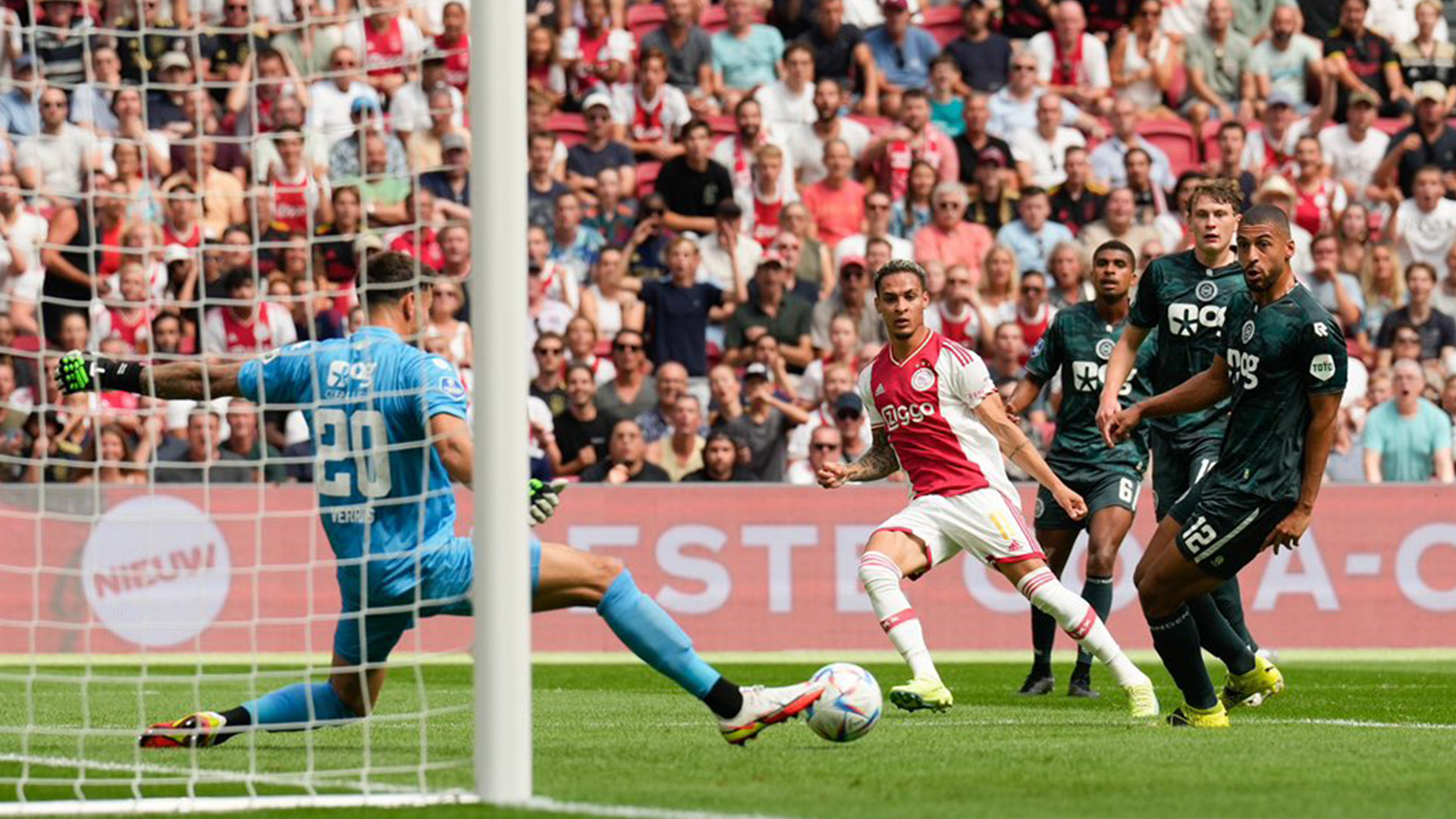 
At the Johan Cryuff Arena, Ajax defeated FC Groningen by a score of six, with hat-trick hero Steven Bergwijn taking the spotlight in addition to goals from Antony, Kenneth Taylor, and Steven Berghuis. Cyril Ngogne had scored the lone goal for FC Groningen.

The first home game of the season at the Johan Cryuff Arena on the dawn of a new era at the football club under the leadership of new head coach Alfred Schreuder witnessed an attendance of 54,060.


Tactical changes from both managers

Schreuder decided to tweak his squad a little bit as Daley Blind moved back to central defence and the return of Edson Alvarez from injury saw the latter return to his defensive midfielder role. Tadic played as a right central midfielder whilst Taylor retained his position on the left. The front three saw Brian Brobbey start up front along with Antony on the right flank and Dutch international Steven Bergwijn on the left flank in a traditional 4-3-3 formation.

Danny Buijs made no changes to his side, though, and chose to play a 4-5-1 formation from last week’s 2-2 draw against FC Volendam with a compact midfield where Pelupessy dropped deep to support the team.

The Eredivisie champions got off to a blazing start when right back Devyne Rensch dribbled past Duarte to play in a cross to Steven Bergwijn, who outmuscled Kasanwirjo by controlling the ball with his chest and allowing it to bounce as he turned to his left to strike a thunderous shot to give Ajax the lead.

When Jorgen Strand picked up a clearance from the defensive area and dropped his shoulder, he dismantled the Ajax defence and set up Cyril Ngonge's darting run to the right flank. Ngonge then dribbled past Wijndal and fired a left-footed shot from the centre of the box into the bottom left corner to tie the score in the 10th minute.

Antony nearly gave Ajax the lead but Verrips made a strong save on his left-footed effort as the Brazilian dribbled past three Groningen defenders from the edge of the box on the right flank towards the six-yard line.

The twenty-year-old got the crowd on their feet when left-back Wijndal won the ball high up the field by feeding into Alvarez, who switched the ball to the right channel as the dazzling Brazilian’s left-footed effort marginally went over the bar.

The star player, at last, received his due in the 28th minute when Alvarez again lobbed a long pass to Antony on the right flank. Antony then cut into the centre of the field from the right wing and unleashed a fierce goal outside the penalty box as the ball blazed to the top right corner.

The home side continued to torment Groningen when Taylor’s shot was too hot to handle as Verrip’s inability to collect the ball nearly led to a Brian Brobbey goal from the rebound. Goal number three was inevitable, and in the 45th minute, Antony displayed a work-of-art as he played in an exquisite cross from the left wing that found Bergwijn who headed in his second goal as both sides went into half time 3-1.

In the second half, the red and white team picked up the pace even more. Tadic spotted Steven Bergwijn running down the left side, and in the 58th minute, he dribbled past Kasanwirjo and Ngonge to score with a right-foot goal into the far corner. The Dutchman’s first hattrick in the Eredivisie was well and truly a visual treat to the home crowd. Bergwijn’s energy, relentless pressing and clinical finishing were a testament to this overall performance.

In the 66th minute, Brobbey’s strong hold-up play against centre-half Balker, who couldn’t keep up with the former’s physicality, played in an intelligent pass to the overlapping Taylor as he slid the ball to extend the lead to 5-1. Ajax wanted more when Winjdal dribbled past the defender as his return pass from Tadic’s miss control led to him playing it into Brobbey, who shot it straight to the goalkeeper Verrips from six yards.

Schreuder made two changes after 68 minutes, new signing Lorenzo Lucca made his debut as he had come on for Brian Brobbey, whilst Davy Klaassen replaced Taylor. A few minutes later, Berghuis joined the party with twenty minutes to go and replaced Bergwijn, who received a standing ovation from the home crowd for his phenomenal display.

Lucca nearly had a dream debut when the Italian had a great chance when a Berghuis cross from the left wing was headed just wide. Berghuis sealed his goal in the 86th minute and made it 6-1 for Ajax when Isak Maata conceded a penalty with a handball as he drilled the ball into the bottom left corner with his left foot to add more misery for Buijs and his team.

A 6-1 win on a Sunday afternoon was a perfect treat for the home crowd at the Johan Cryuff Arena as Ajax dismantled Groningen. The home side will now travel to Sparta Rotterdam whilst Groningen will welcome 18th place Go Ahead Eagles.