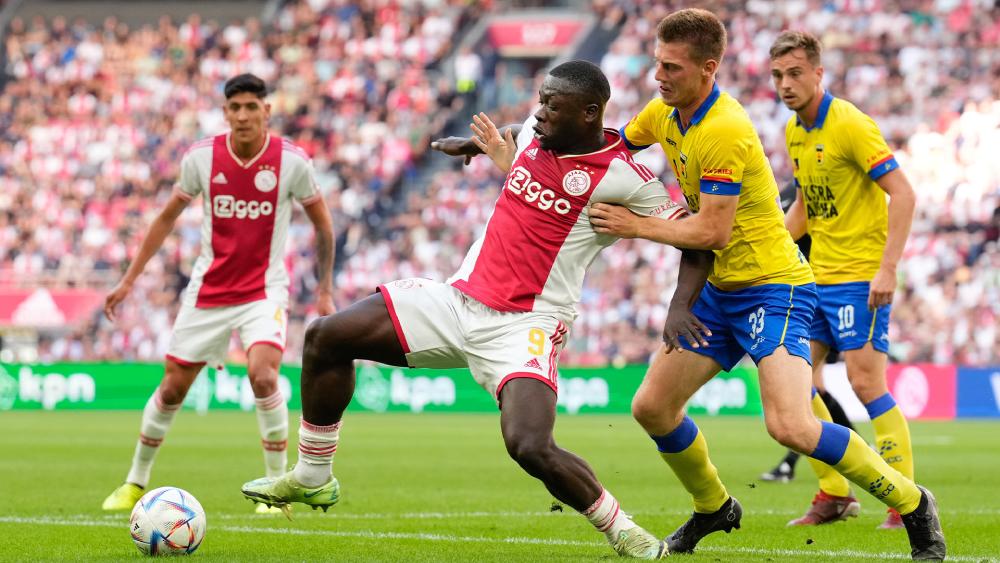 
Ajax cruised to victory against Cambuur at the Johan Cruyff Arena to extend their 100% record in the Eredivisie.

Before kick-off, Ajax came into the game as heavy favourites. The Amsterdam outfit had commenced the 2022/23 season as they meant to go on, winning their first four fixtures. Included in this was their 6-1 thrashing of Groningen, in which new signing, Steven Bergwijn, netted a hat-trick. On the other hand, Cambuur had only been victorious on one occasion, having fallen to defeat twice and drawing once. However, they had been unlucky as they were on course to claim a solid point against AZ Alkmaar in their last outing but were victims of late drama in the 90th minute after Jordy Clasie found the back of the net.

Jamie Jacobs was suspended, forcing the manager, Henk De Jong, into a change, with him opting for a more defensive formation. He shifted from a 4-3-3 to a 4-2-3-1, choosing to field two defensive midfielders to create a blockade in the middle of the park. De Jong was aware of Ajax’s attacking threat and hoped to neutralise the danger of the playmaker, Dusan Tadic, whose creativity sparks his side’s attacks.

Edson Alvarez started for the hosts despite links to Chelsea during the transfer window. It was rumoured that Alvarez would follow the likes of Antony and Lisandro Martinez, who departed Amsterdam for the Premier League. But it was a statement of intent from the manager, Alfred Schreuder, who took the reins after the departure of Erik Ten Haag.

Fans arrived in their flocks, and the game commenced. The visitors had the best opportunity to open the score, but Ajax had a strong start and wasted a couple of half-chances. Striker Roberts Uldrikis found space in the box and passed it to Michael Breij inside the area. The Dutchman lacked composure and blazed his strike over the bar first time.

The missed opportunity had consequences. After 35 minutes, Ajax opened the scoring through Steven Bergwijn. Steven Berghuis played the ball across the box, causing chaos in the Cambuur danger area. An attempted clearance was deflected and sent to ball straight into the path of the advancing Dutchman, who poked the ball through several bodies to break the deadlock and give his side the advantage.

Only five minutes later, Bergwijn doubled his tally to score his sixth goal in five games this season. And what a way to do it! The Netherlands international shifted the ball onto his stronger foot 25-yards from goal and released a rocket that flew past the diving Virginia to give Ajax a comfortable lead going into half-time. The ball was blasted into the inside netting on the right side of the goal and evidenced why Ajax broke the Eredivisie transfer record to sign him.

After the interval, Kenneth Taylor added to Cambuur’s woes by adding a third after 53 minutes. Having just been substituted on, the midfielder opened fire from distance after making room for himself centrally. His shot was deflected, and the ball’s trajectory was altered, meaning Taylor’s shot made its way into the far corner almost in slow motion.

Ajax added a fourth in the 64th minute after Mohammed Kudus tapped in from close range to finish a great move. The move started with Devyne Rensch, who played in new signing Calvin Bassey, inside the area. The defender unselfishly squared the ball to Kudus, who tapped the ball into an empty net to secure the three points for Ajax and keep their record intact.

It was a deserved win for the hosts, who registered 17 more shots than the visitors. Ajax greatly dominated possession, having exactly three quarters, compared to Cambuur’s mere 25%.

Next up, Ajax host Rangers in the group stages of the Champions League, whereas Cambuur host Groningen as they look to bounce back from the defeat against the champions.