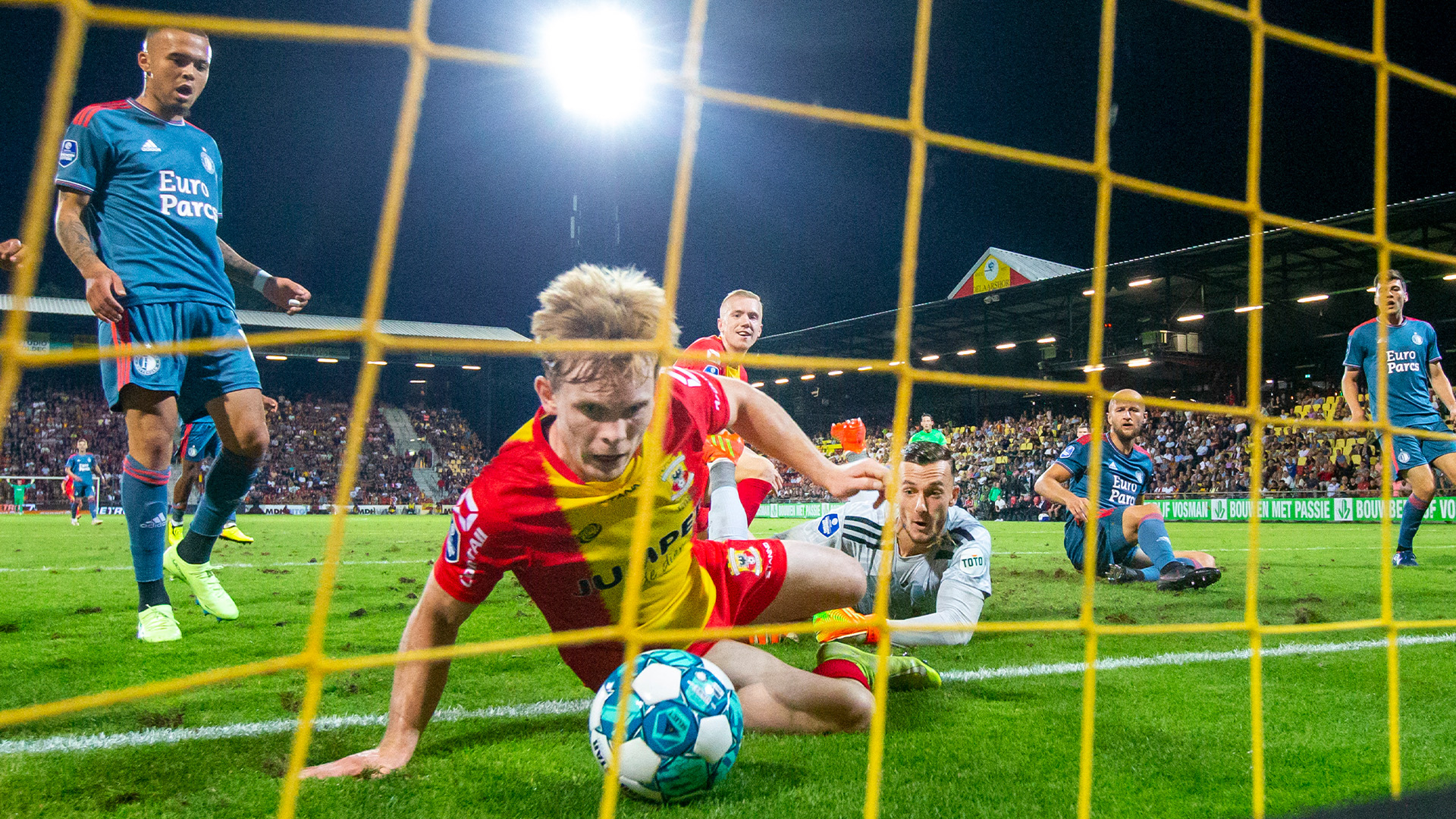 
Feyenoord pulled off the best comeback of the season as they recovered from two goals down to eventually defeat Go Ahead Eagles by four goals to three at De Adelaarshorst Deventer.


A brace from Danilo cancelled a Patrik Wålemark own goal and an Isac Lidberg header to level the scores before Javairo Dilrosun and Sebastian Szymanski completed an emphatic turnaround ahead of Oliver Valaker Edvardsen’s 96th-minute consolation.


The Eagles live up to their name


It took the home side just three minutes to open the scoring as Feyenoord fell asleep from a deep free-kick and left Jay Idzes unmarked in the area. The big centre-half nodded for Evert Linthorst, whose volleyed effort took a wicked deflection off of Patrik Wålemark to send the ball looping into the far corner of the goal. Desperate to make amends, Walemark bought himself a yard on the right before chinking inside and unleashing an effort on goal. But his fizzed shot lacked accuracy and zipped just over Jeffrey De Lange’s crossbar.


Despite reacting well to the goal, Feyenoord would soon find themselves two down when the busy Bobby Adekanye was slid in down the right. The 23-year-old skipped past David Hancko and swung in a delicious cross to the unmarked Isac Lidberg, who guided his header beyond the hapless Justin Bijlow in the 13th minute. A hill to climb had now become a mountain for the visitors, but they managed to half the arrears just nine minutes later, with Walemark cutting the ball back from the byline towards Danilo, who reacted well to volley home his fourth goal of the season. They would draw even shortly after as Wlemark continued to be at the centre of all the action. He received the ball in the middle of the field from a short corner and dinked in an inviting delivery that Danilo met to flick home an outstanding header to tie the game just three minutes before halftime. Feyenoord very nearly completed their comeback in the first half as Orkun Kokcu rifled in a terrific free-kick which De Lange tipped onto the post before saving follow-ups from both Hancko and Wålemark.


It took Feyenoord just ten second-half minutes to complete the turnaround after a clever one-two on the edge of the box between Javairo Dilrosun and Sebastian Szymanski resulted in the former being put through down the left, with the 24-year-old firing low and hard into the bottom right corner. The Dutchman was at the heart of their next foray forward as well, whipping in a searching ball from the left with Danilo did well to control on his left foot before curling an effort on goal. But Feyenoord’s number nine was denied the perfect hat-trick as his effort fell just six inches wide of the post. When Alireza Jahanbakhsh played the ball into Szymanski from thirty yards out, they secured the victory five minutes later. Their talisman was hurt in that endeavour and was substituted by Oussama Idrissi in the 74th minute. The Pole took a touch with his back to goal before swivelling onto his left foot to unleash an unstoppable effort which swerved and dipped its way back to De Lange to ripple the upper echelons of the home goal. It was the goal that they deserved for their overall effort, and by the time the Eagles intervened, it was too late. Oliver Valaker Edvardsen bundled in a Bas Kuipers cross at the back post, but it came in the final seconds of six more minutes and was only a consolation. The result takes Feyenoord to second in the table to continue their unbeaten start, while Go Ahead Eagles remain second-bottom and pointless following five straight league defeats.

Is Kayla Harrison the best fighter in Professional Fighters League?

Manchester United, Chelsea, and Brentford win in the sixth week of the Premier League