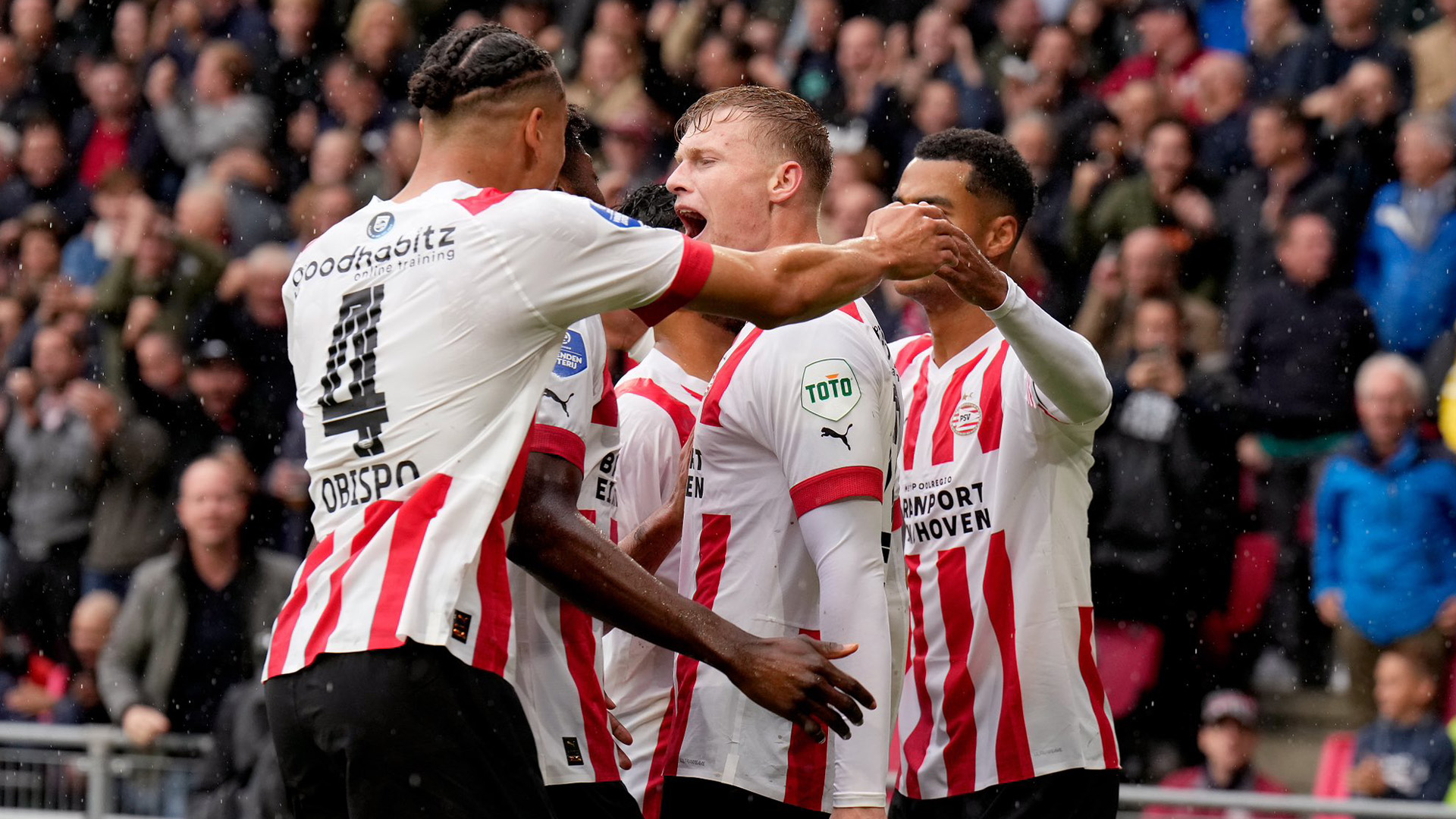 
A top-of-the-table clash in the Eredivisie did not disappoint as PSV Eindhoven and Feyenoord played out a seven-goal thriller at Philips Stadion.

The result sees PSV move up to first in the table, bettering Ajax’s goal difference by a single goal. On the other hand, Feyenoord slip to fourth, but the top of the table is very congested, as they are only two points behind the league leaders.

The hosts made several changes but stuck with the dangerous front three of Ismael Saibari, Xavi Simons, and Cody Gakpo. The visitors were unchanged from the last outing, which saw them cruise to a 3-0 victory against Sparta Rotterdam.

Feyenoord fired in the opener inside the first three minutes to silence the PSV faithful. Philipp Max was dispossessed after PSV attempted to play out from the back, with Alireza Jahanbakhsh robbing him of the ball. The Iranian passed it to Oussama Idrissi, who opened up his body and curled in the opener from the edge of the box to give Feyenoord an early lead.

The hosts almost responded immediately but were denied by the outstretched leg of Quinten Timber. Cody Gakpo released Max down the left wing, giving the full-back space for a cross. Max squared it to Guus Til at the near post, who attempted to flick the ball into the net. His run was met by Timber, who did well to block the shot and relieve his side of any danger.

Feyenoord almost captivated on another PSV mistake to make it 2-0 in the 11th minute. A slip from Armando Obispo allowed Danilo to race at goal. The striker set his sights but clipped his chipped shot over the bar and onto the side netting from a tight angle.

In the 16th minute, Max almost went from zero to hero but could not get the direction desired from his volley. After a deflection took the ball high into the air, it dropped to the full-back in a promising position. The ‘keeper rushed out but was beaten by Max’s effort, however, it was turned away for a corner.

PSV equalised from the resulting corner through Jarrad Branthwaite, who attacked the near-post to level the scores in the 16th minute. Gakpo sent in a low, tame corner that reached the front post. Branthwaite timed his run to perfection and got their first, flicking the ball round the corner and in off the post to complete a move straight off the training ground.

The turnaround was complete nine minutes later in the 25th minute, as Gakpo swept the ball under the arms of the diving Justin Bijlow to put PSV up 2-1. Javairô Dilrosun was dispossessed in midfield by Ibrahim Sangaré, who hounded him into making a mistake. The midfielder played it into the feet of Xavi Simons, who expertly found Gakpo in acres of space. The winger cut inside and picked his corner to give his side the advantage.

Bijlow produced a great reflex save to deny Joey Veerman a superb strike at the half-hour mark. From 25 yards out, Veerman curled the ball elegantly, with it spinning towards the top right corner of the goal. The shot-stopper sprang into action and tipped the ball round the post to keep Feyenoord in the tie.

It was lucky he did make the save, as his side equalised with three minutes remaining until half-time. Idrissi played in Marcos López down the left wing after the left-back had made an overlapping run. López drove in an inviting low cross that was blocked by Obispo. However, the centre-back could only divert the ball straight into the path of Danilo, who had the simplest of finishes to level the tie again.

Two minutes after the interval, PSV were back in front thanks to Guus Til. Simons found Gakpo on the left-wing after Ruud Van Nistelrooy’s side broke rapidly thanks to an interception by Sangare. The winger delicately crossed into a dangerous area, where Til beat the goalkeeper and defender to the ball to net PSV’s third.

However, the lead was cut short yet again as Orkun Kökçü netted a wonder strike to send the away fans wild. The number ten skipped past the challenge of Veerman before curling the ball past Walter Daniel Benítez from 25 yards out. The shot took a deflection on its way in, but the visitors had no complaints as they drew level yet again in the 73rd minute.

Obispo netted the winner for the Eindhoven outfit with seven minutes remaining as he rose highest to powerfully head PSV in front. Controversy surrounded the goal though, as the corner should not have been given due to the last touch of the ball coming off the boot of Saibari. Regardless of whether it should have counted or not, it did, and PSV climbed to the top of the table. It was a brave header from the Dutchman, who suffered a clash of heads in his efforts to get the crucial touch on the ball. After receiving treatment he was substituted and play continued, with PSV seeing out the game to collect another three points.