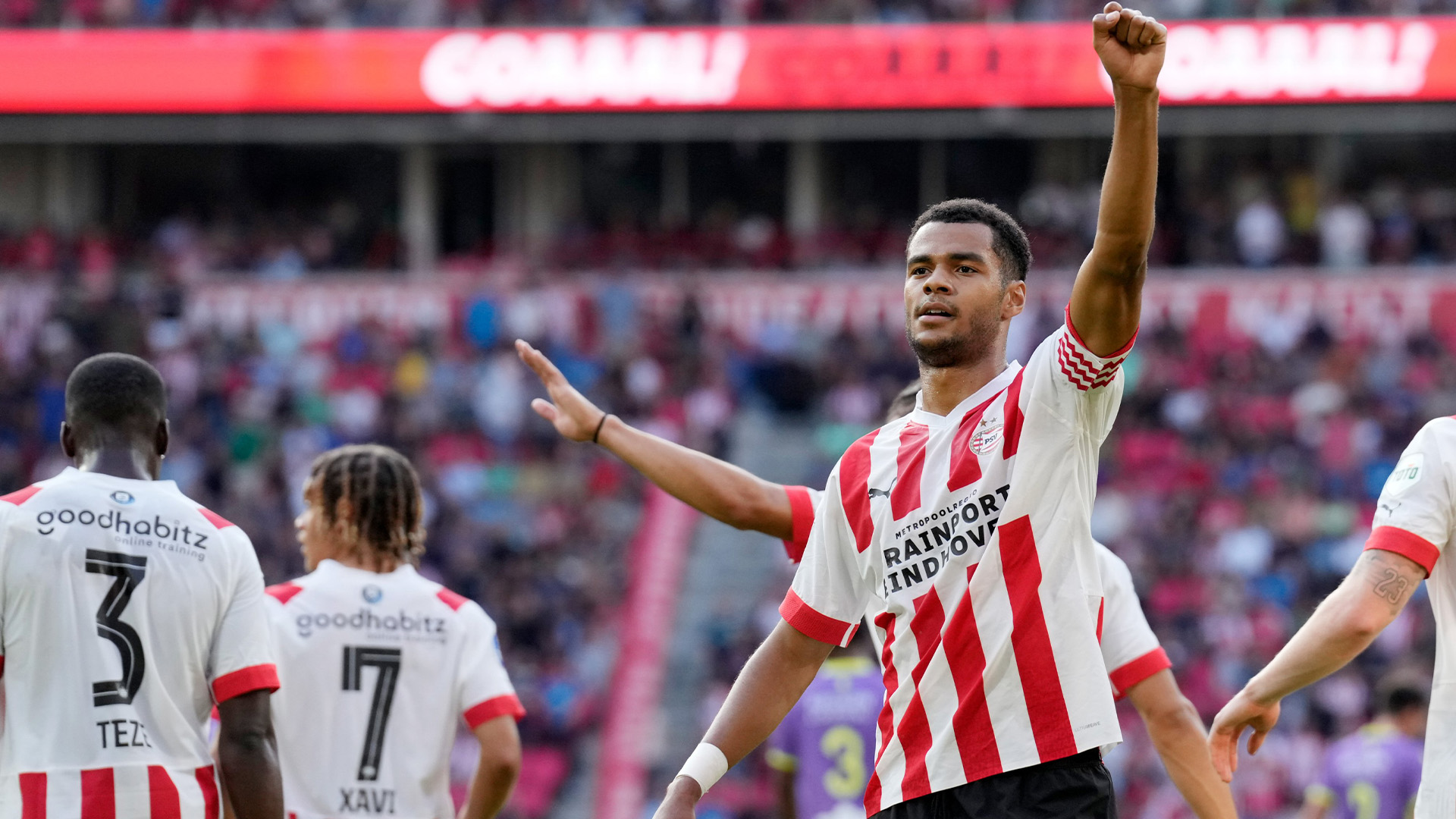 PSV Eindhoven ran riot at the Philips Stadium against FC Volendam with a plethora of goal scorers with the standout being the club’s wunderkind and scouted by many top clubs across the club. Yes, you read it right, a Cody Gakpo hat trick along with a brace from the talented Xavi Simmons, while Johan Bakayoko had a goal to his name and an own goal from Brian Plat. As for the visitors, it turned out to be eventually nothing but a mere consolation from Henk Veerman.

PSV, under the direction of legendary former Manchester United and Real Madrid player Ruud Van Nistelrooy, used a 4-3-3 formation. Teze and Max were moved to the right and left back positions, respectively, while Branthwaite and Obispo manned the two centre-back positions. The front three were Bakayoko, Simons, and Gakpo, while the three midfielders were Til, Sangare, and Veerman.

Wim Jonk’s side had just come off from a 1-0 win against Twente and went with a 5-3-2 formation. Van Miegham played right wing-back, and James at left wing-back whilst the three defenders were Plat, Mirani and Benamar. The three in midfield were Ould-Chikh, Eiting and Murkin as Veerman and Muhren played up front.

PSV got off to a blazing start in the 1st minute when Bakayoko drilled in a powerful low cross as the ball had come off the defender and despite Stankovic keeping it out, Xavi Simmons scored from a six-yard range in a typical poacher fashion.

A few minutes later, Johan Bakayoko’s left-footed shot went over the bar from Teze’s delivery, followed by Guus Til’s cross to Gakpo, whose header from the box had marginally missed the left side of the goal in the 16th minute. Til appeared to have given PSV a second until Stankovic expertly stopped his left-footed drive from the middle of the box in the bottom left corner.

PSV eventually got rewarded for their drive to go forward when the home side won a penalty in the 24th minute as Guus Till was brought down before Bakayoko could find him from the right flank. Up stepped Gakpo, who drilled the back to the bottom right corner to make it 2-0.

Henk Veerman's right-footed shot from Benamar's cross was superbly saved by the PSV goalkeeper as the opposition attempted to put Benitez to the test. Gakpo eventually his second and PSV’s third with a breathtaking run from the left flank after dribbling past the Volendam’s defence with a left-footed shot as the ball raced to the bottom right corner to make it 3-0 in 39 minutes.

The away side manage to get one back before half-time. Damon Mirani played in an exquisite long ball which showed great vision matched by fantastic control by Veerman, who smashed it from long range with a bottom left corner finish. PSV looked to add one more before the stroke of half-time when Xavi Simmons hit the post from Gakpo’s cross.

PSV picked up right from they left the first half when Xavi Simmons cut back inside the box to set up Teze for a shot as the latter’s right-footed shot helped it into inside the back of the net due to an own goal from Brian Platt in the 47th minute as the score line read 4-1.

In the 51st minute, Cody Gakpo sealed his hattrick as he looked to bend one in with his right foot, which was deflected off the Volendam defender, and despite Stankovic’s diving effort, there was no stopping PSV there to make it 5-1.

Van Nistelrooy went for a double substitution in the 55th minute by bringing on Erick Gutierrez for Joey Veerman and Ki-Jaans Hoever for Jordan Teze as he looked the freshen things up. PSV looked to pile on the pressure from the home side’s front line. Savio, who had replaced PSV’s wunderkind and hattrick hero Cody Gakpo broke freely on the counter at a blistering pace and found Xavi Simmons on the left side as the latter scored his second with a top right corner finish to make it 6-1.

Bakayoko, too, got himself on the goalscoring sheet as the right winger’s fine display was well rewarded with another fascinating dribble into the box with his twist and turn followed by a powerful right-footed drive to make it 7-1 with 11 minutes to go. In the 87th minute, after Stankovic saved the teenager's thundering shot, he advanced with his left foot and nearly doubled his total.

As the referee finally blew the whistle, Volendam couldn’t wait to walk off the pitch after PSV ran riot. Van Nistelrooy and his young side certainly look exciting and a successful window in the making by keeping hold of Cody Gakpo, who was scouted by Manchester United, Southampton and Leeds United and chose to stay for another year at least. Anwar El Ghazi too will arrive for Aston Villa, and PSV look as exciting as ever and will now travel to Twente to continue with their impressive form whilst FC Volendam will travel to Sparta Rotterdam.