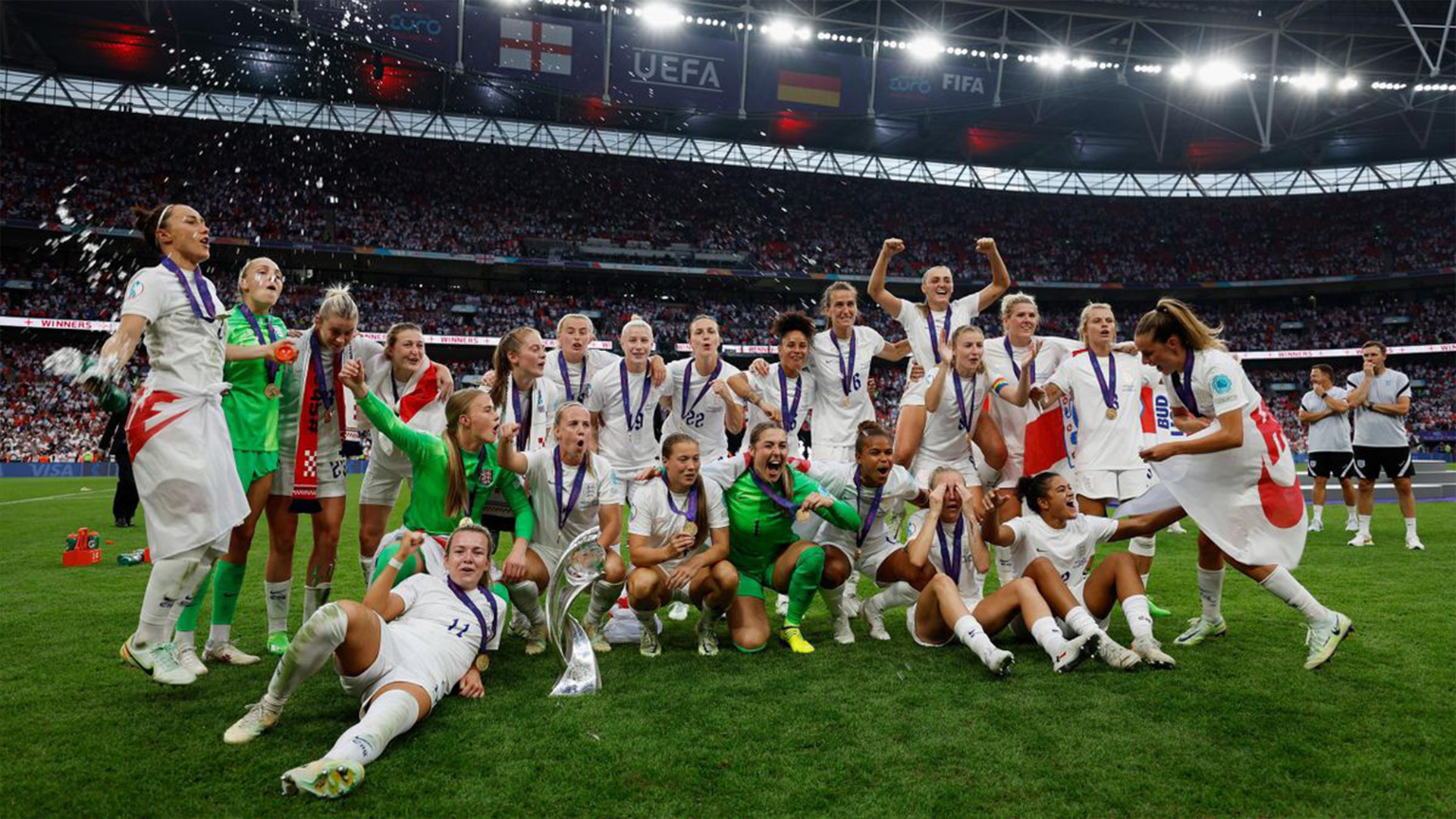 England Women have been crowned as champions of Europe after defeating bitter rivals Germany 2-1 after extra-time. Chloe Kelly wheeled off in celebration in the 110th minute after converting from close range to secure the victory for her nation.

The Lionesses' roar was heard around a packed-out Wembley Stadium as football finally came home. They went one step further than the men’s team last year and did so with an unchanged side. Manager, Sarina Wiegman, stuck to her guns and started the same eleven from the group stages to the final, as her trust repaid.

Before the tournament, Germany had played eight Euro finals and had succeeded on each occasion, winning silverware every time. On the other hand, England had not won a major trophy and lost 6-2 to Germany in the 2009 Euro final. However, this was the present, with new names printed on the back of the white shirts. History beckoned, and this one did not disappoint.

A huge blow was dealt to the German side before kick-off, as striker Alexandra Popp was ruled out of the final minutes before play commenced. The Wolfsburg forward had scored six goals in the tournament, joint best with Beth Mead, who claimed the golden boot due to registering more assists than the German.

After a goalless first half, Ella Toone broke the deadlock on 62 minutes with a delicate chip over the goalkeeper, Merle Frohms, who rushed out to tighten the angle. Toone was found by a sublime Keira Walsh pass that put the Manchester United forward through on goal. She made no mistake with her finish and sent the record-breaking crowd of 87,192 into pandemonium.

Germany responded immediately and hit the woodwork just three minutes later after Lina Magull found some space in the box. England could not resist the German pressure, as they equalised through Magull, whose near-post finish evaded Mary Earps in the England net and silenced Wembley. She crept in front of Chelsea defender Millie Bright and released an unstoppable strike from close range that rifled into the roof of the net. Tabea Waßmuth assisted Magull as she squeezed in a low cross from inside the English box direct to the feet of the advancing Bayern Munich midfielder.

But the Lionesses found the winner in extra time, as substitute Chloe Kelly poked home to give England the advantage with only ten minutes remaining. Despite both sides searching for an equaliser, it looked as if the tie was to be decided by penalties, much to the dismay of England fans, due to their infamously poor penalty record against their arch nemesis.

Lauren Hemp swung in a corner from the right, which caused chaos in the danger area. Manchester City full-back Lucy Bronze got a touch on the ball and directed it goalward, where Kelly swung at the ball. Her right boot connected with the ball and sent it trickling towards the German goal but was repudiated by Frohms, who got a foot to it. Time stood still as the ball fell into Kelly’s path again. But this time, she made no mistake and forced the ball home. Her outstretched leg made the difference as she poked the ball past Frohms, who was just off her line. Wembley erupted as Kelly ran off in jubilation, but she hesitated as there was confusion as to whether the goal would stand. Was England about to be denied one of the gigantic achievements in its history? No! It was given with Kelly celebrating wildly with her teammates. The glory was England’s.

The triumph was a testament to England’s manager, as Sarina Wiegman’s super-subs created the decisive moments. Both the goal scorers were substitutes. Ella Toone entered the field of play in the 56th minute and scored the opener six minutes later, whilst Chloe Kelly replaced Beth Mead in the 64th minute and bagged the winner.

Toone was a super-sub in the quarter-final against Spain, coming off the bench again in the 64th minute. England found themselves 1-0 down, with an exit from the competition looming, but Toone volleyed home an equaliser with just six minutes remaining. Her brilliant finish inspired England to victory, as Georgia Stanway fired a rocket from outside the box straight into the top left corner in extra time.

England captain Leah Williamson lifted the coveted trophy to mark a historic moment for English football. The tournament was a monumental success for England, having four players named to the team of the tournament. The Lionesses have certified themselves as legends by bringing football home on what was a mighty day, not just for women’s football but the sport as a whole.