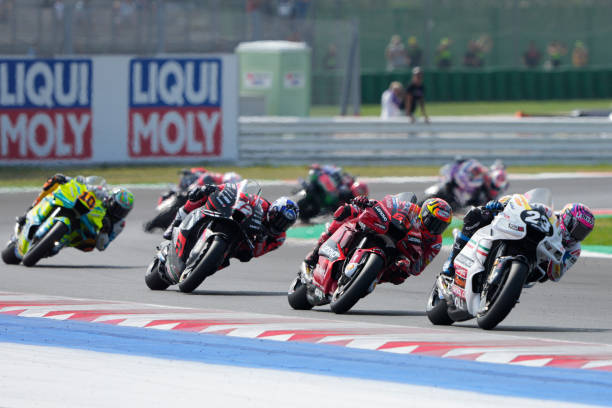 
Bagnaia becomes the first Ducati driver to bag four wins in a row as he finishes in front with style.

Winning the Austrian GP, the British GP, the Dutch GP and now the San Marino GP advanced  Bagnaia’s position to second in the championship table. Quartararo finishes fifth, shortening his  lead on the world championship to 30 points.

Taking his first pole position since Argentina 2018, Jack Miller got the holeshot and led into the  first corner, but pandemonium ensued behind him. Johann Zarco lost the front of his Pramac  Ducati after colliding with the Factory KTM of Brad Binder on the inside of Turn 1, going on to  take out the Repsol Honda of Pol Espargaro and the wildcard Ducati of Michele Pirro. Miller  then unceremoniously lost the front of his bike at the start of the second lap into the third corner,  crashing out of the lead familiarly for him.

Bagnaia took the lead and held on to it, in a strong display from the 25-year-old, who is trying to fight his way back into the championship fight. Gresini Ducati rider and Bagnaia’s future teammate, Bastianini, kept him  honest throughout the race, before miring him under pressure at the end of the race, attempting  a move on the inside of Turn 3, on the last lap, before thinking better of it.

Championship leader Fabio Quartararo came in fifth in a race that left him disappointed with his  Factory Yamaha as Bagnaia cut the gap that stood at 91 points at the summer break  down to just 30 with six races to go. Factory Yamaha teammate Franco Morbidelli’s race got cut  short when he was taken out by the Gresini Ducati of Fabio Di Gianantonio into turn four after he  pushed too hard trying to pass the LCR Honda of Alex Marquez. It cut short a weekend that  looked quite promising for Morbidelli, who had his season-best qualifying of P11 on Saturday. It  continues a poor season for the Italian, who’s struggled to match the levels of his Champion teammate.

Maverick Viñales on the Aprilia finished 3rd, over 4 seconds behind the top 2, and could not match the hot pace set at the front towards the end of the race. It was a forgettable day for teammate and title hopeful Aleix Espargaro, who had a lonely race to 6th, more than 10  seconds from the lead. The weekend ended with him 33 points behind Quartararo and losing  second place in the championship to Bagnaia.

Luca Marini, on his VR46 Ducati, continued his pleasing run of form by finishing 4th for the second  consecutive race. His rookie teammate, Marco Bezzecchi, crashed out of turn 3, the following on the third lap crashing at Turn 8, a disappointing end to a promising weekend for the impressive  rookie. Jorge Martin had an anonymous weekend after being given the discouraging news of his  rejection by the Factory Ducati Team. He finished P9 after being unable to progress into Q2 on  Saturday.


The KTM of Brad Binder recovered from his first lap shenanigans with Zarco to finish P8. His  teammate, Miguel Oliveira, who is on his way to RNF Aprilia next year, followed Binder home to  P11. His future teammate, Raúl Fernández, had one of his best weekends for Tech3 KTM  finishing in the points in P13, while teammate Remy Gardner’s race ended early in the sand.

Suzuki was without their star rider, Joan Mir, who got injured in the previous race at Austria and  was replaced with Kazuki Watanabe, who is part of Suzuki’s Endurance team after regular test rider Sylvain Guintoli was injured. Watanabe ended the race a lap down in an uneventful race for the Japanese. Alex Rins had an anonymous race, cruising home to 7th place, never showing the leaders’ pace.

The LCR Honda of Alex Marquez finished well in 10th in a rare foray into the top 10 for the  Spaniard, who’s on his way to Gresini Ducati for 2023. Honda’s stand-in rider Stefan Bradl and  Marquez’s teammate Taka Nakagami came 14th and 15th, respectively. This could be Bradl’s last race of the season with the return of the 8-time champion Marc Marquez for the post-race test on Tuesday in what would be the most significant positive of the weekend for Honda.

Sunday’s race brought an end to an illustrious career for RNF Yamaha’s Andrea Dovizioso, who  announced his decision to retire here at his home GP during the summer break. Dovizioso  witnessed the peak of his career at Ducati, challenging Marquez and finishing second in the  championship from 2017 to 2019 and leading Ducati back into being a title challenger after the dark days following Casey Stoner’s departure from the team in 2010. Dovizioso will mostly be  remembered for always being the bridesmaid, never the bride. He will be one of the best riders who never won a MotoGP championship.

The Tuesday and Wednesday after the race see a 2-day test for all teams as they start to look  forward to development for the 2023 season. MotoGP returns on August 18th at Motorland  Aragon in Spain, and we’ll hopefully witness the return of #93 Marc Marquez.