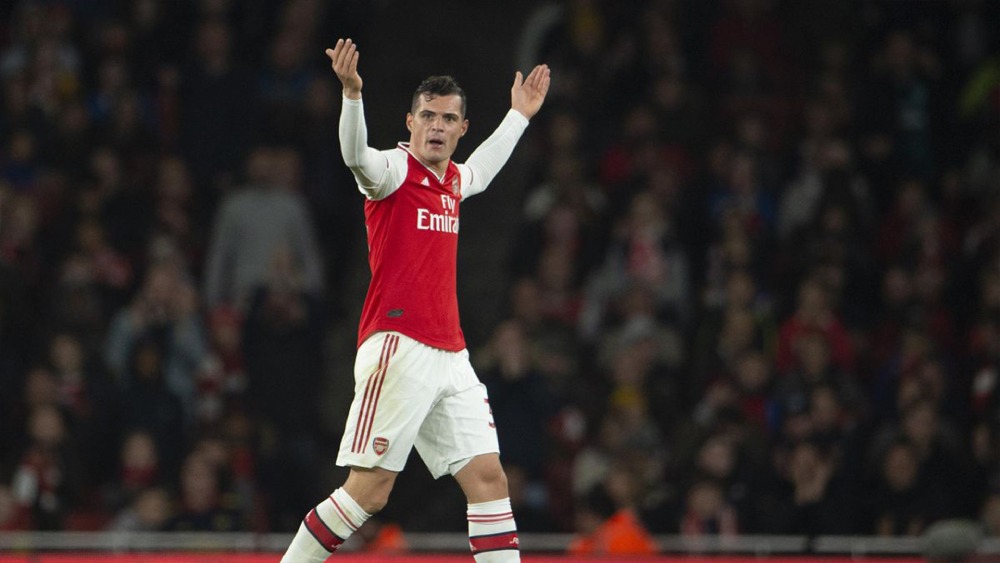 
When people talk about Granit Xhaka, they speak of his temperament, his fondness for a red card, and the character he is or could be.


But when they talk about his personality, people like to think they know him because they’ve watched him on the pitch. However, he is quite the opposite.


He loves a red card, but there is a player in him that allows him to be a vocal and integral asset in the Arsenal and Austria dressing rooms.


His experiences in life and football have made him the player he is today, someone who will not give up and accept defeat.


Born to an ethnic Albanian family from Podujevo, Kosovo, his family moved to Switzerland for a better life. And Granit, along with his brother Taulant, would embark on their football journeys.


Starting at Concordia Basel, he caught the eye of FC Basel’s scouts early on and signed for them in 2002, where he would stay and develop in their ranks.


He scored 11 goals in 37 games for the U-21 side between 2008-2010. This impressive form convinced the Swiss club to hand Xhaka his first appearances in the 2010-11 season in the third qualifying round of the UEFA Champions League against Debrecen, where he would score to seal a 2-0 win over the Hungarian club.


He would have to wait a while for his first league goal, which came towards the end of the season in a 5-1 win over FC Thun on 15 May 2011.


From early on, his talent and potential were evident. This was certified when his manager Thorsten Fink said that ‘Xherdan Shaqiri was the best talent in Switzerland after him’, heaping hopes and praise onto his young shoulders.


He won the Swiss Super League in his first season, and 2011-12, he would win the league and cup double, impressing others to the point of interest from other clubs, particularly in Germany.


It was Borussia M'gladbach who won the race for the Swiss’ signature with only a season of being a first-team regular. It was interesting to see how he would step up for a team playing in one of Europe's top five leagues.


Signing for a fee of around £7.5m, Lucien Favre favoured the Swiss and put him in the first team as he played 22 games in the Bundesliga, scoring once and helping Monchengladbach to an eighth-placed finish.


The 2013-14 and 2014-15 seasons would see Xhaka thrive as one of the talents to look out for in the Bundesliga as his performances helped his team to a sixth and third-placed finish respectively, qualifying for the UEFA Champions League in the latter.


Many European clubs were starting to sniff around the then-23-year-old, who had established himself as one of the Bundesliga's influential midfielders and had become one of Switzerland’s most important players.


This was because of his all-rounded game. What he lacked in pace, he made up with everything else. He could operate as a ball-winner, a deep-lying playmaker, an ‘eight’, or even as a ‘ten’ when needed - this was because of his outstanding technical ability. He was blessed with passing, shooting, and intelligence, which kept his team ticking. Let’s not forget his mental attributes, which saw him become a vocal leader and aggressive player on the pitch, which would work in his favour sometimes, but other times not.


He had picked up three red cards in the 2014/15 season and 12 yellow cards - this showed he had a habit of losing his temper and being reckless.


Whilst that was a significant concern, teams around overlooked that and were convinced that they had found the next midfield sensation, as Xhaka’s three goals and consistent performances took Monchengladbach to fourth in the Bundesliga, securing Champions League football at Borussia-Park.


Arsenal and Liverpool battled for the Swiss, but London won the signature as he became Arsenal’s third-most expensive signing for a reported fee of around £35m.


Arsenal had been chasing N’golo Kante and Xhaka, but with the Frenchman joining Chelsea and ‘The Gooners’ failing to capture Jamie Vardy, they needed to step up their transfer game and managed to bring in the Monchengladbach man.


His first competitive game would come as a substitute appearance against Liverpool on an opening day in the infamous 4-3 loss. He picked up a yellow card and didn’t get any rave reviews as Arsenal flattered to deceive.


However, Arsenal started to pick up a form, and Xhaka got first-team football. He repaid Arsene Wenger by showing him why he is one of Europe’s most exciting midfielders with a thunderbolt against Hull City in a 4-1 win in the Premier League.


After a strong debut campaign, Xhaka's rollercoaster ride began when he received his first red card for Arsenal in a 3-2 victory over Swansea City for kicking Modou Barrow from behind. The fact that Xhaka couldn’t keep up with the Gambian made the incident even worse.

A second red card would occur in January in a 2-1 over Burnley after a rash challenge on Steven Defour. It became clear that this was going to become a problem.


He finished the 2017-18 season with another goal against Manchester United as his long shot was deflected and looped over De Gea. He finished with an FA Cup featuring throughout the campaign and started in the 2-1 win over Chelsea in the final.


2017-18 would prove to be a difficult season for Arsenal and Xhaka as their fifth-placed finish in the previous season meant that they would not feature in the Champions League for the first time in Arsene Wenger’s tenure. Despite winning the Community Shield, Arsenal could not find form in the Premier League and slumped to sixth, which forced Arsene Wenger to announce his departure.


Xhaka would again score worldies after worldies against Liverpool, Newcastle, and Crystal Palace and would remain on his nest behaviour as he didn’t pick up a single red card.


He was inconsistent, but to give Arsene a proper send-off, Xhaka performed exceptionally well in the Europa League.


Another C+ season for him was the 2018-19 season, which saw him reach the Europa League final against Chelsea, which Arsenal lost 4-1 - he also went through this season without picking up a red card.


This is when it gets interesting. Unai Emery appointed Xhaka captain of the club, but his performances had many fans slating him, and it reached a boiling point against Crystal Palace in October 2019 when he was subbed off in the second half and met with applause by his fans. He responded with expletives and removed his shirt before walking down the tunnel.


The Swiss captain got criticism from the coach and the media. He later lost his position as captain and had a break from the team until Mikel Arteta's arrival, who put Xhaka back into the first team and worked to improve relations between the supporters and the players.


It seemed as if he was finished at the Emirates Stadium, as the club tried to offload the player for his actions, although Mikel’s change of heart and a new approach to the new era meant that he was given a lifeline.


His reintegration was rewarded as his form improved, and he became an integral part of the side again, despite that, the fans still found it very difficult to love him again. But he was focused on football as he thanked Arteta for the second chance.


He would feature in the FA Cup final against Chelsea, a game they would win 2-1 as Arsenal won their 14th FA Cup - he played a critical role in reclaiming the trophy. Although his stripped captaincy meant he didn’t have the responsibility of lifting the trophy’ a vision of what could have been.


His form continued into the 2020-21 season. Another Community Shield win followed, and it seemed it couldn’t go wrong. But a sending off after a spat with Burnley’s Dwight McNeil and grabbing Ashley Westwood by the neck saw him sent off in the Premier League tie in December 2020, a game Arsenal would win 1-0 thanks to captain Aubameyang.


His temperament was still an issue and didn’t help his already fractured relationship with the fans. But this didn’t deter Arteta from choosing him later in the season as he would score against Chelsea in a 3-1 home win. 13 days later and would remain pivotal to Arteta steadying the ship in his first season.


For the first time, Arsenal and football fans would see a side of the Swiss that nobody sees. They saw a family man, a measured, loving husband who is passionate about his job and family, someone who will do anything to succeed even when the chips are down.


His red card against Liverpool in the EFL Cup semi-final felt like it was going to go all wrong for the former Basel man again as it cost Arteta’s men a trip to Wembley.


His importance and reliance on Arteta’s side helped as he took the responsibility of being the mature, experienced leader in a very young squad. His long-range strike against Manchester United encapsulated just what he was to Arsenal, an important player who could provide when needed, and his form contributed to ‘The Gooners’ nearly qualifying for Champions League football for the first time since 2017 but would miss out to their rivals Tottenham.


He was climactic in their attacking play. 1.35 key passes per 90, 1.74 passes into the penalty area per 90, 5.61 progressive passes with 4.29 progressive carries per 90, and 3.06 shot-creating actions per game make him so effective as a playmaker, whilst the assists haven’t been there, he has shown that he makes this young Arsenal team to clock.


His deep-operative role changed come the new season as he is now playing as a box-to-box midfielder which has seen him involved in the attacking phase a lot more with one goal and two assists in five Premier League games this season.


As Arsenal start the season unbeaten, we are seeing the Xhaka of old at Monchengladbach - the influential box-to-box midfielder who is critical to any team and can change the game with his quality.


With nine passes leading to shots (35 last season), this new role has seen him express his gratitude for the freedom and licence to operate up and down the pitch.


A happy Xhaka is a good Xhaka, and Arsenal fans are starting to appreciate the once frowned-upon midfielder, which shows that the Swiss have what it takes to be successful in this league.


The 29-year-old has quickly recovered from nearly being out of a job in 2021 to reclaim his position as one of the league's most underrated midfielders.


We are now seeing the Xhaka who made him one of the most gripping midfielders in Europe when he played in Germany, as he is demonstrating just how dynamic he can be if allowed to play as a box-to-box midfielder.


He repeatedly showed his incredible talent for the Swiss National Team during important competitions, which would have been discouraging for an Arsenal supporter to witness because the talent was always there, but the setting was never right.


In North London, it is starting to look like a happier place; an exciting young manager, an equally thrilling young team, and the buzz from the fans, who are buying into this philosophy under Arteta just shows a turn-around at the Emirates is more than possible.


Xhaka could be one of Arsenal’s most important players this season as they look to strive for success and get the club back into the Champions League for the first time since 2017.