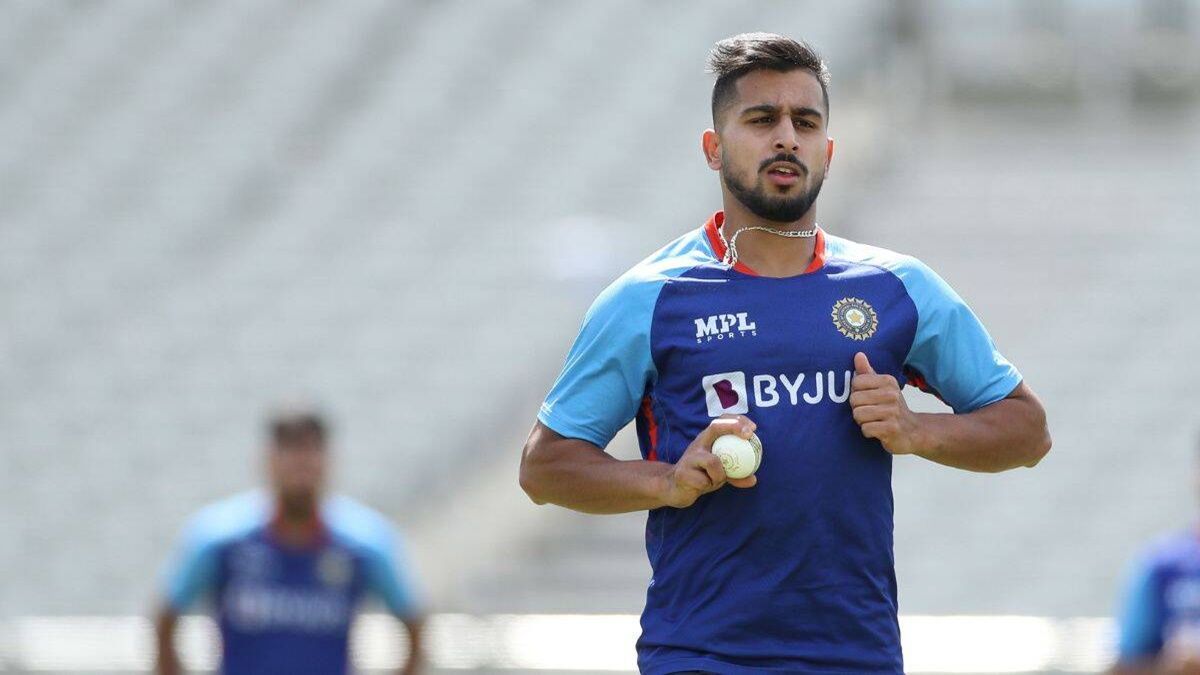 When you fire up Google or YouTube for the words ‘Umran Malik’, you come up against a video of a relatively unknown English batsman Brooke D Guest who saw his stumps go cartwheeling by the sheer pace of India’s newest sensation. Hailing from the capital city of Jammu and Kashmir, Malik has found himself in India’s T20 national side for the tour of Ireland & England on the back of two excellent seasons for his IPL franchise Sunrisers Hyderabad.

Malik made his T20 debut for Jammu and Kashmir in January of 2021. By the end of February, he made his List A debut. After being taken to UAE as a net bowler by Sunrisers Hyderabad, the youngster got a chance to play his first IPL game vs Kolkata Knight Riders as a short-term replacement for T Natarajan. He bowled the fastest delivery, over 150kph, with the third ball of his first over.

In the match against Royal Challengers Bangalore, he bowled five consecutive balls over 150k, one of them registered 153kph on the speed gun, the second-fastest delivery in IPL 2021 so far. His first spell was a miserly 3-0-10-1, keeping the run rate in check while seasoned veterans like Rashid Khan went at an economy of 10. Glenn Maxwell was hopping and being late while facing Malik.

His franchise captain Kane Williamson said, "He certainly is special. We saw him in the nets in the last couple of seasons.. he is a real competitor. He is proving to be effective even on slower surfaces.” His team-mate Jason Holder echoed the sentiments about how much of a tough time Malik had given the batters in the nets. He commented on the youngster’s consistency in training and how an extra pace always adds to any bowling attack. Mailk's control over the ball is often exalted. Experts usually hold the opinion of bowlers being erratic at times, but his flexibility on the field is illustrious. His firmness is the acclaimed reason behind his glorious deliveries. He didn’t have a good outing in his final match in IPL 2021, going for 12 runs per over. However, based on his performances, he was selected to be a net bowler for India at the T20 world cup.

He was retained by his franchise for IPL 2022 at a lofty sum of 4 crore rupees, being the player with the fewest IPL matches on his resume. And he proved he was worth that valuation with his 22 wickets in 14 games, the fourth highest wicket-taker in IPL 2022, with an average of 20 and an economy rate of 8.93. His five-wicket haul against Gujarat Titans was the talk of the town for a while. His raw, uninhibited pace troubled batters, brought fans to the edge of their seats and created a lot of buzz among cricket experts.

His jaw-dropping performances prodded the ex-Indian coach Ravi Shastri to implore the Indian cricket board to give him an immediate central contract. Past cricketers like Daniel Vettori and Chris Lynn backed his name for the T20 World Cup squad later this year. According to Lynn, the bouncy and pacy nature of pitches in Australia, where the T20 World Cup will be held this year, would suit Malik. Vettori pointed out that his ability to produce 150kph+ deliveries consistently is rare, making every ball an event. It generates anxiety among batters and adds an X-factor to the team.

Consequently, Malik was selected in the squad for the India tour to Ireland. He made his India debut in the rain-curtailed T2O vs Ireland at Malahide. But failed to have a memorable debut and went for 14 runs in the only over he bowled. He got a second chance in the next T20 match, doing well to hold his nerve to defend 17 runs in the final over. He also got his maiden wicket when India conceded the second-highest number of runs in a T20I after the 245 they conceded in a one-run defeat against West Indies in the USA in 2016.

India has a gem on their hands. They have to use him carefully, sizing he is not squandered as most express face bowlers do at a young age. In Rahul Dravid, he has an excellent coach who can guide him and temper expectations without creating a big flap about it. The India setup has some brilliant bowlers like Jasprit Bumrah, Mohammed Shami, Bhuvneshwar Kumar, Mohammed Siraj, and Malik, who can learn how to manage the bowling workload and how to go about the business. At 22, Malik is enjoying the best time of his life, doing something that comes naturally to him: bowling fast!

How will Milan Škriniar transform Chelsea