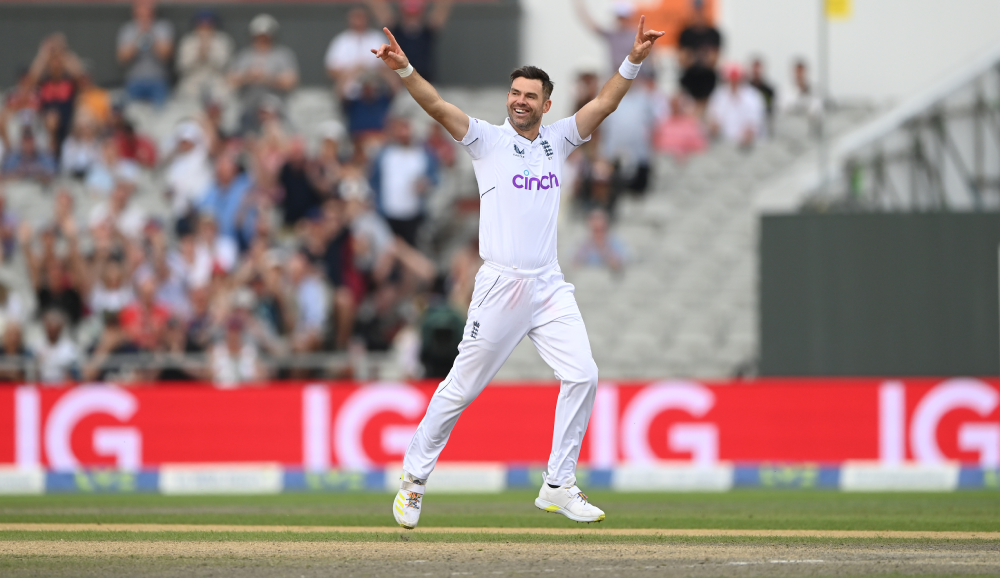 
When England played South Africa in the 2nd test match of the ongoing test match series, James Anderson created history by becoming the first cricketer in the history of test matches to play 100 Test Matches on home soil. By doing that, he overtook the iconic Indian batter Sachin Tendulkar who played 94 test matches for India in India and legendary former Australian Captain Ricky Ponting (92 tests).

Anderson,40, an OBE, has so far featured in staggering 174 tests, claiming 658 wickets, which showcases his brilliance. On the list of highest wicket-takers in tests, he stands in the third position, only trailing Muttiah Muralitharan (800) and the late Shane Warne (708).

In the second innings of the 2nd test match against South Africa in Manchester, after dismissing Simon Harmer, he went past legendary Australian pacer Glenn McGrath to become the leading wicket-taker in international cricket among pacers. The Australian had 949 wickets across all three formats in his international career. By dismissing Simon Harmer and Kagiso Rabada, Anderson increased his tally by two to 951 wickets across all three formats, which comprised 664 wickets in tests, 269 in One-Day Internationals (ODIs) and 18 T20 Internationals.

He trails the legendary Indian leg-spinner, Anil Kumble, by five wickets to become the third-highest wicket-taker in International Cricket. Anderson also holds the record for “not out” batting performances in Test cricket in 100 instances. He overtook West Indian great Courtney Walsh, who stood second with 61, not out instances. He is the only seam bowler to take 300+ wickets on home soil, 100 of which came at the iconic Lord’s alone. He is also the first English bowler to take 400, 500 and 600 wickets in Test matches.

Earlier in the second test, South Africa decided to bat at Old Trafford after winning the toss. South Africa lead the series 0-1. England had lost the opening test match at the iconic Lord’s by a humiliating innings-and-12 run. Newly-made captain Ben Stokes had to taste the first defeat under the new management of former New Zealand skipper and now England head coach Brendon McCullum. The loss broke the four-match winning streak winning against New Zealand and India. In the second test, England had to respond, an impressive all-round performance from England, which was anchored by their skipper Ben Stokes with a brilliant century (103) and a bowling masterclass from the ageless James Anderson (3/30) led the hosts to clinch a win in a do-or-die match to save the series loss and level it at 1-1 going into the third and the final test match of the series at the Oval.