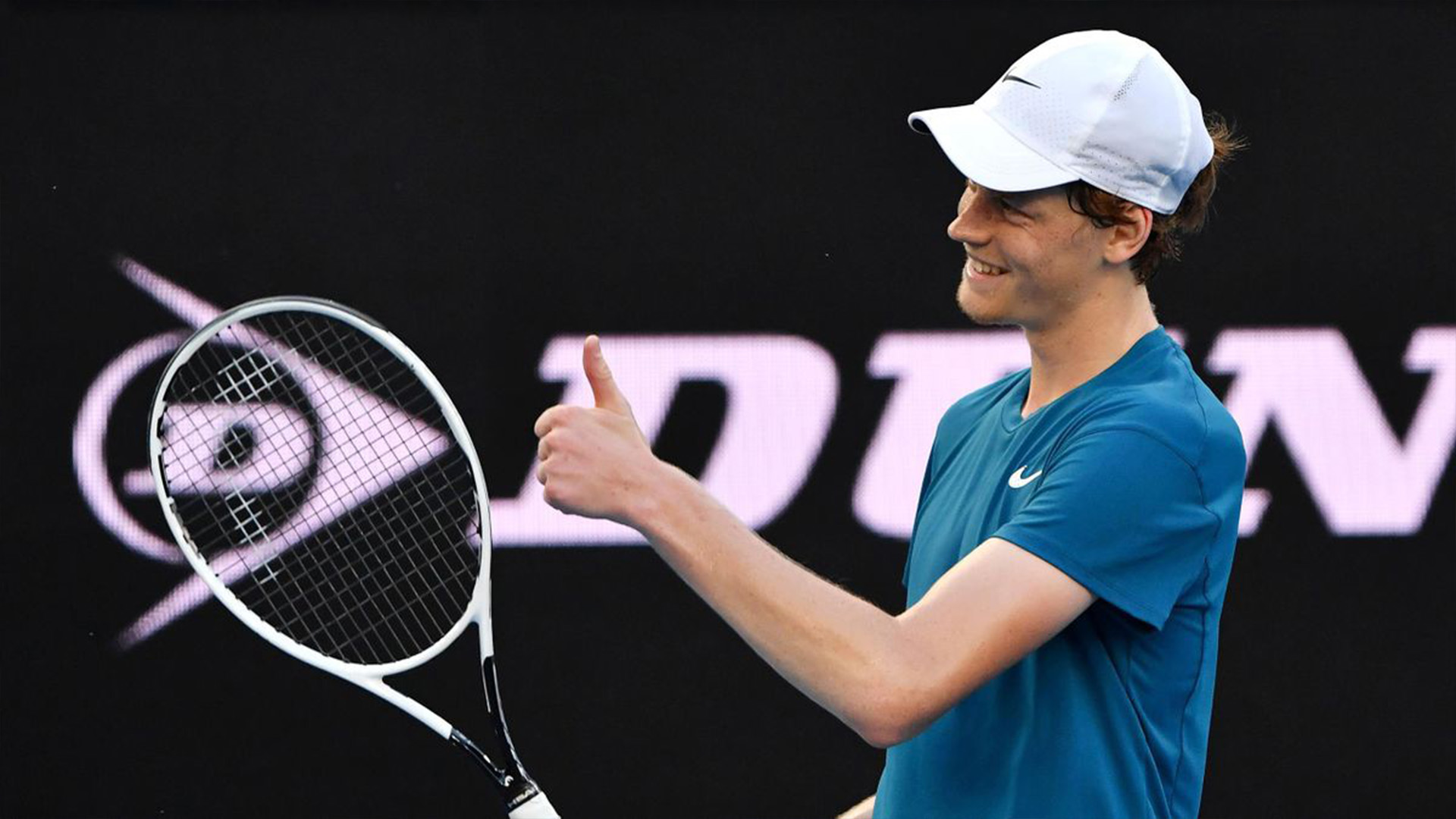 Standing at 6 foot 2, Jannik Sinner is becoming a towering figure in the world of tennis. His career began on the ice, and he graces the court. Born in northern Italy and being homed by a mother who worked as a waitress at a ski lodge, he became fond of skiing and quickly became a top junior skier.

Although he is one of the hottest prospects, his tennis career took its time to progress as he never showed the true extent of his potential at the junior level. This all changed when veteran coach Riccardo Piatti took Sinner under his wing at age 13 and created the phenomenon we get to watch play today. Having trained Novak Djokovic and Maria Sharapova, the doubt about the Italian’s talent quickly diminished.

He has caught the attention of tennis fans around the globe with his sudden rise in the world rankings. Tennis legend Roger Federer has praised Sinner for the balance he portrays during a match which echoes his calm and collected approach, somewhat similar to the Swiss national himself. Quietly confident and equally dangerous on both wings is a combination to fuel fear into any opponent who steps up to play Sinner.

The tennis star has a slim build and effortless moves around the court, attributed to his increased flexibility from his skiing history. His effective movement allows him to dictate play by countering the majority of shots by his opponent.

It is not surprising that Sinner has the statistically most potent backhand on tour, given the praises for his ability to execute this technique with such speed under increasing pressure. This groundstroke shot has more topspin than any other player on the ATP tour implying that the ball pushes the opponent off balance, leaving to make the return a trickier shot. His play is on the baseline as he favours his incredible heavy shots and can absorb pressure from his opponents. He feels most comfortable sliding around the baseline, pouncing on opportunities to pressure his opponents with his brutal forehand and backhand.

What is most impressive about Sinner is his age. Consistently breaking records and impressing some of the sport’s greats, he has an extremely high ceiling.

He began his junior tennis journey playing on the ITF Junior Circuit in 2016, where he did not have the best start to his promising career. Sinner never played the main draw of any high-level Grade 1 singles events and only entered one singular high-level Grade A tournament, Trofeo Bonfiglio. Due to not entering many high-level events, he ended his junior career with his highest ranking being a mere number 133.

He concentrated on the ITF Men's Circuit at the beginning of 2018. Due to his poor junior ranking, he could only participate in ITF Futures events, which was a challenge. However, the luck of the draw meant that towards the tail end of 2018, he started to receive wild card offers for ATP Challenger Tour events. Sinner ended 2018 with only one doubles title and sitting in the number 551 spot.

Sinner’s luck began to improve in 2019 as he raced up the ATP rankings and won his first ATP Challenger title at 17 years and six months. He rose over 200 spots with just that one life-changing title. During the second half of the 2019 season, Sinner opted to play more often on the ATP Tour with a massive step up in experience and talent.

His first ATP victory came against Steve Johnson in the Italian Open and his second in July at the Croatian Open Umag, which saw him break into the top 200. Following his qualifying loss at Wimbledon, the then 17-year-old qualified for his Grand Slam at the US Open. He topped off his year with victories over Frances Tiafoe, Mikael Ymer and Alex de Minaur to win the 2019 Next Gen ATP Finals. An accolade he will never forget was winning ATP Newcomer of the Year.

He entered 2020 with his first ever Grand Slam main draw match win before being shunted out by Matron Fucsovics. A time that we all knew was coming was when Sinner won his first ATP title on the hard courts of Sofia, Bulgaria, in November 2020, just 143 weeks following his entrance into the ATP rankings.

This year, he also became the youngest player in a quarterfinal of a French Open since number 1 Novak Djokovic in 2006 and the first in their debut year to reach that stage of the competition since Rafael Nadal in 2005 – what a graceful achievement. Sinner showed the tennis fraternity who he was and what to look forward to in upcoming tournaments.

He began 2021 with the same ardour and tenacity he had at the close of 2020, and he went on to win back-to-back ATP titles. After a stunning start to the year, his success continued with a third title and first ATP 500 title, beating Mackenzie McDonald in the final – this resulted in an entry into the top 15 tennis players globally. His French Open campaign halted following a defeat at the hands of Rafael Nadal. More notably, he successfully defended his ATP title at the Sofia Open as the top seed. 2021 was a year of many ups and downs with him besting Diego Schwartzman in the European Open final to take home his fifth career title but also losing out to Daniel Medvedev in straight sets in the ATP Finals. He ended 2021 at a career-high rank of world number 10.

2022 – the year of the quarterfinals. At the 2022 Australian Open, Sinner fought his way to reach the final eight of a major for the second time in his illustrious career. The 2022 Miami Open was going swiftly as he fought through Nick Kyrgios just to retire in the quarterfinals. Similarly, he reached the quarterfinals of the Monte Carlo Masters, where he lost to second seed Alexander Zverev. His time on the big stage at Wimbledon 2022 began with his first win at this Major. Reaching another quarterfinal was very impressive for the young Italian international, but he came up against the eventual champion Novak Djokovic in an intense affair over five sets. The Croatia Open beckoned again, and Sinner came out victorious by beating fierce rival Carlos Alcaraz in the final to be crowned on clay for the first time.

The growing tension between upcoming tennis sensation Carlos Alcaraz and Sinner has been tainted with the possibility of becoming one of the sport’s greatest rivalries. Despite a victory against Alcaraz earlier in July, Sinner entered the match in Croatia as the underdog. The Spaniard’s efforts to defend his Umag title came crashing down as Sinner countered his talent with his long reach, which earnt him his first title of the 2022 season, taking his tally to six overall. The Italian’s consistency has shone through on Tour this season and has reached six quarterfinals in 2022 before his recent victory in Umag.

Whatever is next for Sinner, he will approach it in his calm demeanour whilst remaining a joy to watch with his heavy and relentless strokes and his ability to use his skill set to his advantage.