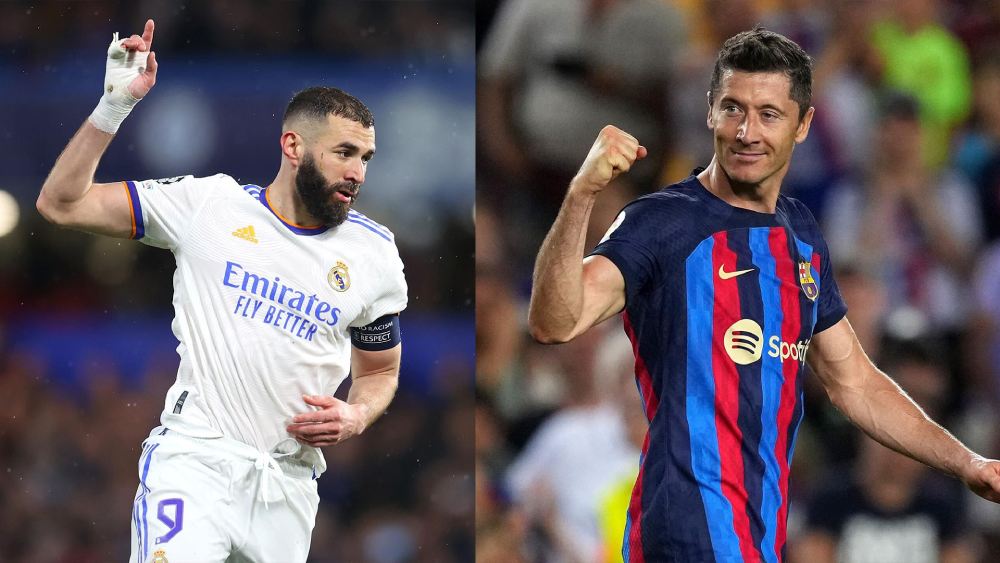 This season two of the world’s greatest strikers will battle it out to rule Europe and La Liga. Karim Benzema certified his legendary status with an incredible individual campaign last season, as the striker leads the shouts for the prestigious Ballon D’Or award. However, he will face tough competition at the top, as Robert Lewandowski swapped Bayern Munich for Barcelona in a bid to take the Catalonian club back to domestic glory.

El Clasico this year will be feisty, reminding fans of the fierce rivalry the two had at the pinnacle of world football when the likes of Cristiano Ronaldo and Lionel Messi participated in the derby. Since Messi’s departure, Barcelona has not been able to fill the enormous void left by the Argentinian. But Lewandowski’s arrival gives fans the hope that his goals can fire the Spanish giants to the top of the table.

Benzema is on fire and produced one of the finest seasons seen by a striker in the modern day. The Frenchman oozes class and possesses a golden touch that draws the ball into the back of the net like a magnet. His spatial awareness is impressive and accommodates him the time to link up with his teammates. Last season he showed his world-class ability and inspired Los Blancos to a thrilling Champions League trophy despite the odds being against them in matches against Chelsea and Manchester City.

The strikers’ play styles differ despite them playing the same position. Benzema is more of a centre-forward who links up with the wingers and offensive midfielders to launch attacks. This is evidenced by the way Carlo Ancelotti lines up his squad. In The Whites’ most recent game, they played a 4-4-3 system, allowing Benzema to link up with wingers Vinicius Junior and Federico Valverde. The system was successful, as all three forwards got on the scoresheet during the ninety. When in attack, Benzema drifts into the box and looks to finish off chances, but the Madridista possess naturally silky feet, in which he can dribble round and past opponents too.

In comparison, Lewandowski is a traditional striker who puts the ball in the back of the net. This is his primary job and does not drop back as much to utilise the wingers. In Barcelona’s last game, he operated as a lone striker in a 3-2-4-1, with wingers Ferran Torres and Ousmane Dembele supplying him with balls into the box and to his feet to create a shooting chance. Lewandowski is deadly in front of goal, and the hitman bagged two goals in the game, scoring his first before a minute had even passed. The Pole’s highlight reel is extraordinary, as he can score from anywhere and once scored five goals in nine minutes against Wolfsburg in the Bundesliga.

Since both strikers have already opened their accounts for the season, they have both entered the race for the golden boot to win. Benzema made no mistake from twelve yards to get himself off the mark and then scored his second and third of the season late against Espanyol, making it three in three. Whereas Lewandowski has notched two consecutive braces, putting him at four goals in the early stages of the season. Benzema has one assist too, matching his number of goal involvements with Lewandowski.

Last season, the Pole hit an impressive 35 goals in 34 games in the Bundesliga, making his goal-to-game ratio positive, an outstanding achievement for a striker. In comparison, Benzema bagged 27 goals in 32 games in La Liga but claimed 12 assists as he helped his side by setting up his teammates frequently. In addition, the France international helped Madrid to the Champions League title by scoring 15 goals throughout the competition. He claimed the golden boot, but Lewandowski put the pressure on Benzema by racking up 13 goals in the competition, despite the Munich outfit crashing out of the quarter-finals against Villarreal.

On the international stage, Lewandowski is the spearhead figure for Poland and is the nation’s record goal scorer. Unfortunately, the rest of the Polish team is not on the elite level as Lewandowski, who will never reach the heights of glory he reaches club level on the international stage. However, he has smashed records for the red and white, as he chalked up 16 goals in the qualifying stages for the 2018 FIFA World Cup, surpassing the previous record. Since making his international debut in 2008, the forward has made 132 appearances for Poland and has scored 76 goals along the way.

On the other hand, Benzema has not always thrived for the French national team. His international career got off to a bright start after he was part of a side that won the 2004 UEFA European Under-17 Championship, but it would decline quickly after he was left out of the 2010 World Cup squad. The number nine would not represent Le Bleus for five years as he was implicated in a scandal. However, he returned to the squad for 2020 and has been named the French Player of the Year on four occasions. Even with his absence, Benzema has played 97 times for his country and has scored 37 times.

Both players are now 34 years old but have aged like fine wine. Last season was Benzema’s best, as he filled the pocket left by Cristiano Ronaldo. Although the Portuguese star deported the Spanish side in 2018, they have been attempting to replace his presence up-front, with Benzema stepping up to the plate last season. Lewandowski uses his experience and natural striker’s instinct to get into prominent positions, meaning he does not require blistering pace. Both can use their head excellently but are equally as efficient with their feet.

It will be interesting to see how the forwards get on this season, as their form directly correlates to how their team are doing. Both sides are unbeaten this season, and both strikers have commenced the season well. We could be about to see a classic La Liga title race.