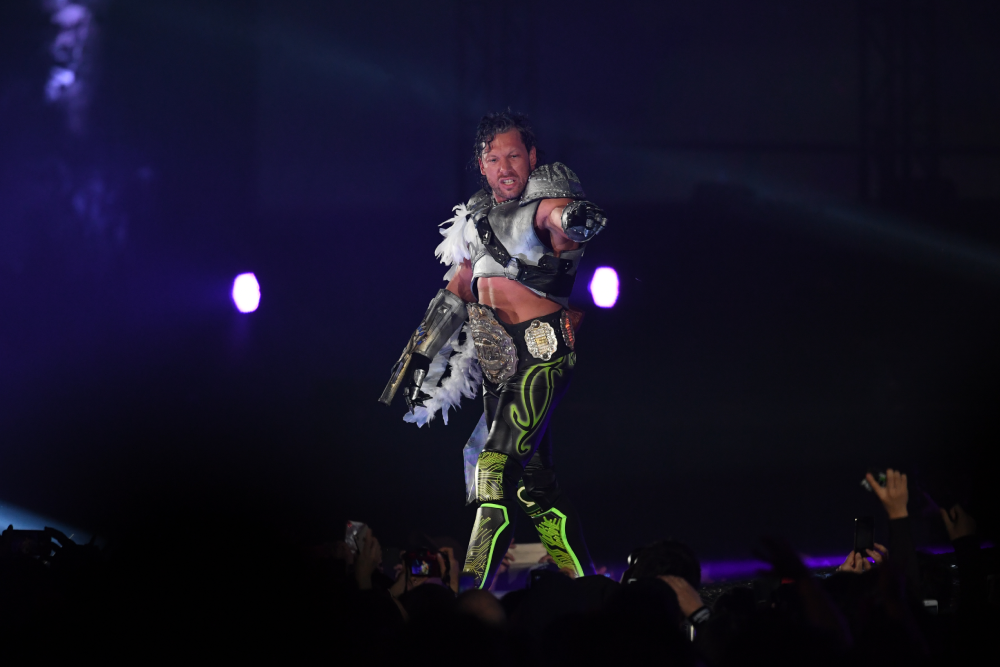 Even a few years ago, fans presumed that if you haven't made it into the WWE, you are not worthy of being called a wrestler who had made it. The wrestler who strongly challenged that notion was none other than the "Best Bout Machine" Kenny Omega. Omega is one of the few remaining players in the industry who have never bothered to test the waters of WWE. Instead, he has become a sensational household name and has been in the conversation of being an all-time great by establishing himself in the alternative and independent landscapes.

Tyson Smith, in his childhood, became a fan of video games, anime, and Japanese culture. Those interests, coupled with his teenage exposure to wrestling, only made him admire the strong style even more. After training for a year, 16-year-old Smith made his professional wrestling debut in 2000 for Top Rope Championship Wrestling, where he remained and learned the ropes for two more years. There, he experimented with his gimmicks, first coming up with a surfer persona named Kenny Omega but later dropping it for an otaku-influenced gimmick.

Omega fell onto WWE's radar when he was given a tryout for Deep South Wrestling. Impressing the coaches with his trait, the young Canadian found his way to join WWE's developmental in 2005. By the following year, Omega would ask for his release after falling out with the coaches, criticising promoters Bill DeMott and Jody Hamilton and trainer Bob Holly. Then he would go out once more to explore the indies, but this time it would take him to uncharted territories.

From 2008, Omega would take dates to work for three promotions like DDT Pro-Wrestling, Pro-Wrestling Guerrilla, Ring of Honor, and New Japan Pro-Wrestling. In DDT Pro, he would form a tag team with Kota Ibushi- known as the Golden Lovers. Since 2006, Kenny, captivated by Ibushi's work for DDT Pro and wanted to approach Ibushi to work on a series of matches together. Omega went on to shoot videos of his DDT-style attempts and upload them on the internet to get the promotion's attention, and after working with Ibushi, the two became good friends. Golden Lovers became the prime example of long-term booking, as the two would rekindle their on-screen friendship after years in NJPW.

In the west, Omega made sporadic appearances for ROH and PWG. Over to the east, NJPW wanted the Golden Lovers on their roster. On October 11 at Destruction '10, the Golden Lovers defeated Apollo 55 to win the IWGP Junior Heavyweight Tag Team Championships for a brief period. Kenny competed in NJPW's Best of the Super Juniors tournaments in 2010, 2011, 2013, and 2014.

Having signed a new contract with NJPW, Kenny Omega made his first appearance for the promotion at Power Struggle 2014. Donning the monicker of "The Cleaner," Omega was revealed as the newest of the popular faction of The Bullet Club. Understanding his potential as a top draw- the NJPW management rewarded Omega by giving him a significant push. Kenny cut his promos regularly from here on, which made the audience get invested with his storylines even more. He was naturally skilled on the mic. Serving as a heel, he refused to speak Japanese to the spectators even though he was fluent in it. His character came up with more video game references.

Omega defeated Ryusuke Taguchi to win the IWGP Junior Heavyweight Championship for the first time at Wrestle Kingdom 9. After some successful defences, he lost the title to Kushida at Dominion 7.5. Omega regained the title at Destruction in Okayama before dropping it again at the Wrestle Kingdom 10. The following day, Bullet Club turned on its leader A.J. Styles, with Omega taking over the leadership of the stable.

At The New Beginning in Niigata 2016, Omega defeated Hiroshi Tanahashi to win the vacant IWGP Intercontinental Championship. Days later, he and The Young Bucks–the Bullet Club subgroup known as The Elite–won the NEVER Openweight 6-Man Tag Team Championship. This subgroup ushered in a lot of global eyeballs to the NJPW product, as The Elite became known as the most talented triplet during that point in time.

Hailed as one of the best professional wrestlers in the world, Omega had signed on to become a regular competitor for ROH. He found himself in the World title picture soon afterwards.

Omega created history on Japanese soil by becoming the first non-Japanese G1 Climax winner in history in 2016. By winning the tournament- he earned an opportunity to compete for the coveted IWGP Heavyweight Championship. His bout with the promotion's champion Kazuchika Okada lasted for 46 minutes to become the match was the longest in the history of the Tokyo Dome Show. Though Kenny lost that night, journalist Dave Meltzer gave the contest a six-star rating in the Wrestling Observer Newsletter, adding that Omega and Okada "may have put on the greatest match in pro wrestling history."

During the G1 Special in the USA in July 2017, Omega defeated Michael Elgin, Jay Lethal, and Tomohiro Ishii to become the inaugural IWGP United States Heavyweight Champion. A year later, Omega challenged Okada for a rematch that happened at Dominion 6.11. It culminated in a 60-minute time limit draw. Meltzer gave it 6 1⁄4 stars making it the best-rated bout in wrestling history.

Obviously, there had to be a third and final match for the title. The series concluded at Dominion 6.9, where Omega defeated Okada in a two out of three falls match with no time limit for the IWGP Heavyweight Championship. Meltzer rated this one seven stars, which remains the highest ever given to a wrestling match.

Leaving his legacy behind for changing the world, he left NJPW and ROH to start a new wrestling promotion that would give the fans an alternative to the mundane product that was being fed to the global audience. Omega signed a four-year contract with All Elite Wrestling as an executive vice president of the promotion, as well as, serving as one of its in-ring talents alongside the Young Bucks and Cody Rhodes.

Omega would feud with Chris Jericho and Jon Moxley during the initial days of the promotion. At Chris Jericho's Rock 'N' Wrestling Rager at Sea Part Deux, Omega and Adam Page defeated SoCal Uncensored to become the new AEW World Tag Team Champions. The two had a successful reign but lost the titles eventually against FTR.

After this, Kenny Omega returned to singles action and participated in a tournament to determine the number one contender for the AEW World Championship. Omega won the said tournament by defeating his former partner, Adam Page, in the final round at Full Gear. At Winter Is Coming, Omega defeated Jon Moxley to become the AEW World Champion for the first time.

Becoming a heel, Omega associated himself with Don Callis as his in-ring manager. The duo sent shockwaves when both of them appeared on Impact television. At that time, AEW had a working relationship with rival promotion Impact. From this partnership, Impact's Rebellion pay-per-view saw Omega defeat Rich Swann in a Winner Takes All match to retain his AEW World Championship and win the Impact World Championship.

Simultaneously, AEW formed another strategic partnership with Lucha Libre AAA Worldwide, where AEW talents got loaned out to compete. As an active participant, Omega competed in all the pay-per-view events of those three promotions. At one point, Omega acquired all the World Titles of every company with AEW that had a working relationship. He held the AAA Mega Championship and the Impact World Championship alongside his AEW World Championship.

Continuous title defenses saw Kenny Omega compete for the most in his active years, making him the most popular individual in wrestling. Pro Wrestling Illustrated ranked him No. 1 on its list of the top 500 male professional wrestlers for the second time. However, all those works took a toll on Kenny's body, and he had to lose every title to go on a hiatus to get two surgeries done and then rehabilitate from the excessive strain.