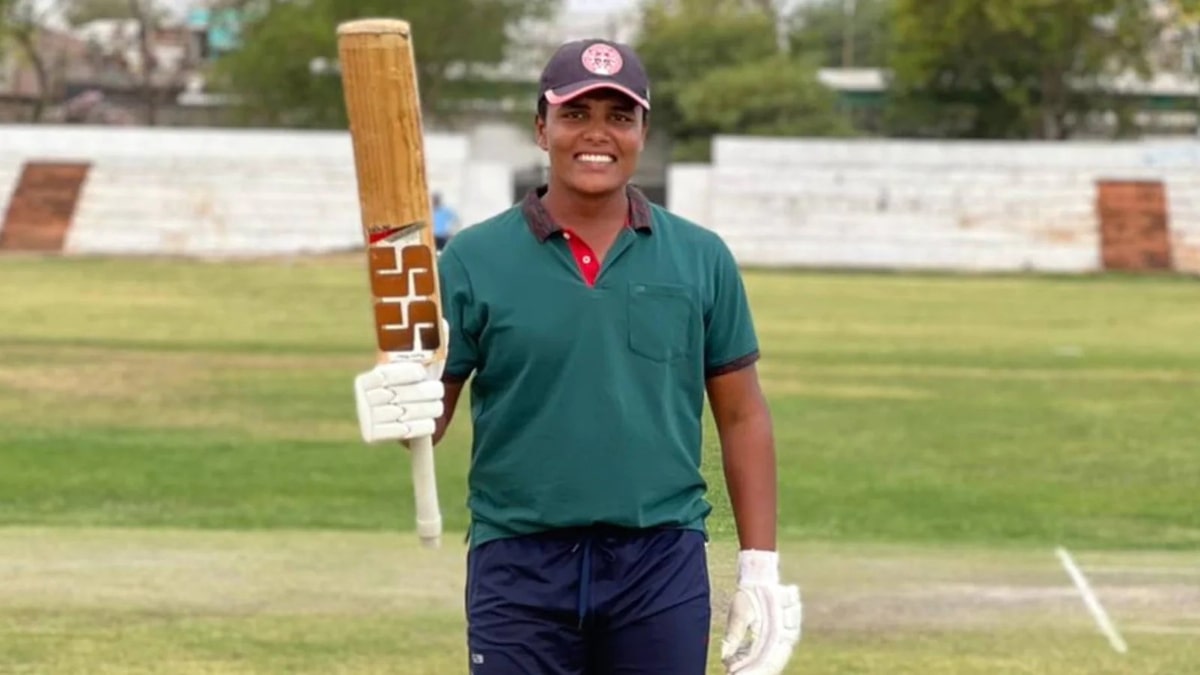 Kiran Prabhu Navgire, a name no one heard before April this year, is now beating the doors to claim her place on the national cricket team. She set the record for the highest individual score in the Women Senior T20 Trophy while scoring an unbeaten 162 for Nagaland against Arunachal Pradesh in 2022.

The 27 years old batter from Solapur began her domestic career in Maharashtra in 2017. Many cricket enthusiasts are unaware that she started her journey in athletics for Maharashtra and had won 110 medals across various events in the javelin throw, shot-put throw and 100 meters race. Navgire then switched to cricket and received her formal training. She represented Maharashtra for three consecutive years from 2017 to 2019. However, she was dropped from the state team for the 2021 season. Disappointed Navgire, then decided to play for Nagaland as a guest player in the Women’s Senior T20 Trophy. Since then, she has never looked back and amassed whopping 525 runs from just seven games.

What makes her this special is her power-hitting potential, weighed up to the likes of Gayle, Sehwag, or any other explosive batter out there. After scoring a record high of 162 runs against Arunachal Pradesh, she became the only player in the history of Indian cricket to score 150+ runs in a T20 match. A feat that no other Indian batter, men or women, has ever achieved so far. Her seven outings in the senior T20 tournament had witnessed 35 sixes and 54 fours, tallying up to 525 runs, followed by Shefali Verma with 350 runs.

This was not some average performance and gathered every one’s attention, including the selectors who bagged her a call for the Women's T20 Challenge (women’s IPL). She lined up for the Velocity squad, where she shared the dressing room with the likes of Deepti Sharma, Kate Cross, and Laura Wolvaardt. There was a lot of buzz questioning Navgire’s ability to replicate some of her batting pyrotechnics for her team against the balanced bowling units and well-established bowlers. Skipper Deepti Sharma came to her defense and confirmed that Kiran has been showcasing her mighty potential during the training and net sessions and is well-groomed to make it into the first squad.

The Maharashtrian hitter recorded the half-century mark only off 25 balls, breaking Shafali Verma's previous record in the history of women’s T20 challenge. Kiran further shot to fame and did not disappoint anyone with her performance of 69 off 34, including five boundaries and sixes. The moment Navgire raised her bat after crossing off her first fifty, her father was spotted dancing in the stands. Her blistering knock had five sixes which showered praises from the entire cricketing fraternity across the globe. Some called her ‘powerful striker’, the ‘find of the tournament’, a ‘new star in the making’, a ‘rare talent’, among others. Her inning also ensured that Velocity qualifies for finals and had given them the hope to chase down the total. However, the team fell short of the daunting target but earned a place in the finals. Later, Laura Wolvaardt spoke highly of Navgire's skills and said her sixes were the biggest sixes she had ever seen a woman hit.

Indian women’s cricket team has struggled in the international arena in the past which points to a bigger question– does Kiran possess that A-factor for internationals? Even though her raw power and exceptional power-hitting capabilities are unmatched in Indian cricket till now, it warrants more exposure at the highest level. She also needs grooming and coaching to work with the short ball. But once guided, she would be extremely dangerous and an asset to Indian cricket. She could be that a-star finisher or that secret ingredient that India needs to finish on top at the T20 international events.

With a long season ahead, we can only hope that Indian selectors will keep her in the mix of things and will provide her with an ecosystem where she can work with her technical changes. She will be missing out on the bilateral series against Sri Lanka as she is not a part of the Indian squad. We hope to see her in action in the upcoming Commonwealth Games in July-August or in the fifth edition of the Asia Cup T20, likely in October. She is a star player and is worth keeping an eye on.