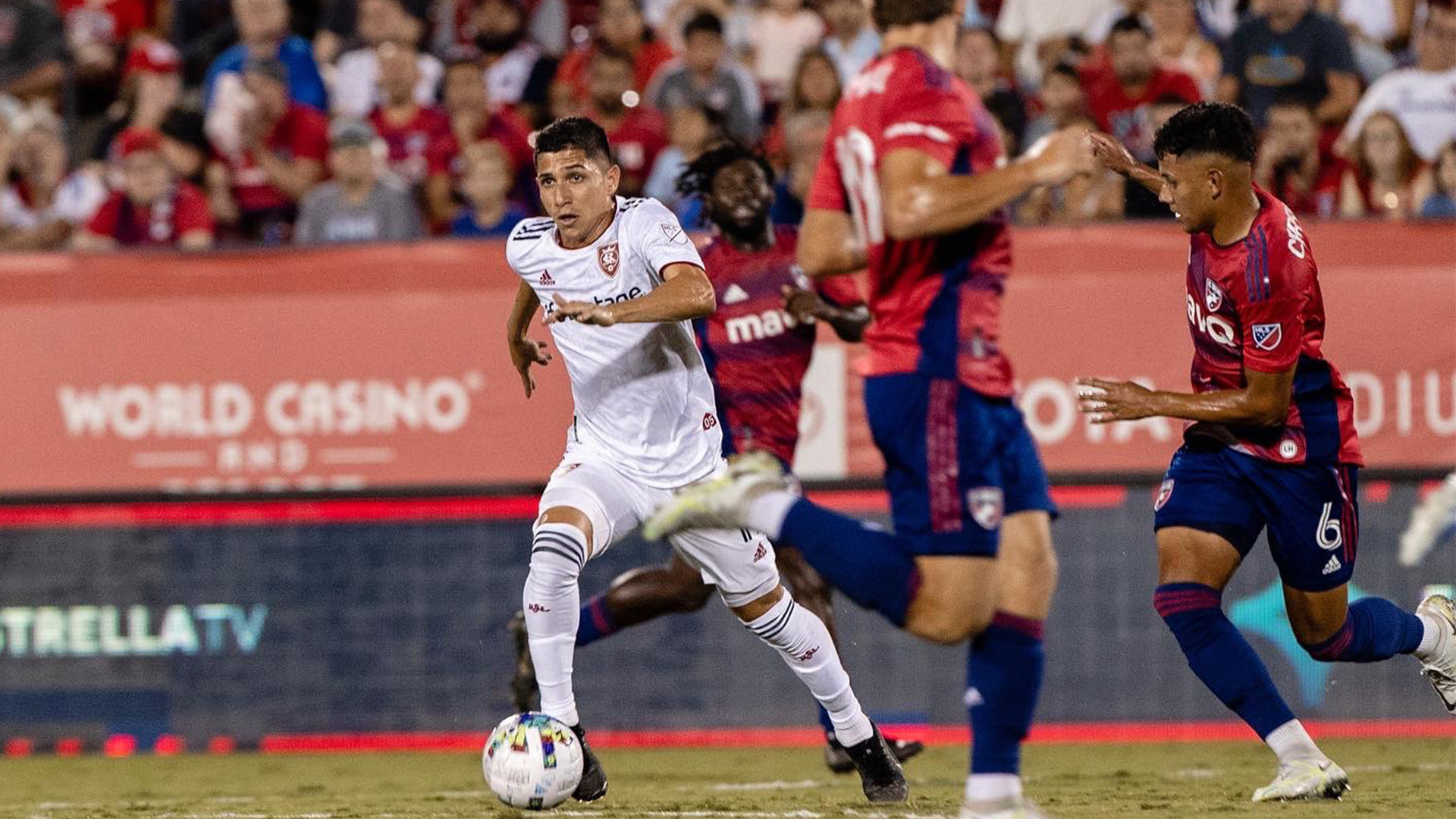 Both sides squandered the opportunity to close the playoff deficit after a thrilling game between two evenly matched teams finished in a tie at the Toyota Stadium thanks to goals from Alan Velasco and Anderson Julio.

Nico Estevez chose to reshuffle his midfield and front line by keeping a similar back four with Paes in goal. The United States international Sebastian Lletget had come in for Tsiki Ntsabeleng whilst Ferreira started up front in place of Jara in a 4-3-3 formation.

Pablo Mastroeni and his Salt Lake side were left unchanged from their draw against Vancouver in a 4-4-2 formation, who looked to add more pressure in 5th place Nashville.

FC Dallas got off to a dream start in the 7th minute. Lletget combined with Ariola, who played in a pass through the defender’s leg from an extremely tight angle as Velasco pounced on Salt Lake’s lapse in concentration by sending in a powerful finish to the bottom left corner, which went past Real Salt Lake’s goalkeeper Zac MacMath.

However, since that goal, F.C. Dallas struggled to keep up with the away side’s high-pressing football. The away side came close to an equaliser when in the 21st minute, central midfielder Pablo Ruiz struck the ball powerfully as MacMath had to leap his way to tip the ball off the post. Real Salt Lake remained in control of the game, and nine minutes later, Justin Meram believed he had won a penalty for his team when he was brought down in the box by a charging Paes, but VAR overturned the decision because the goalie was able to touch the ball. The men in white pressed for the equaliser when Jefferson Savarino’s long-range effort was kept out by Paes yet again as the away were unable to capitalise on the rebound.

The first eventually drew to a close as Real Salt Lake, despite being frustrated, were the confident side as both managers looked to tactically organise their teams.

The host team got off to a strong start, much as they did in the first half, when Lletget and Arriola again linked up, this time from the left wing. The former found an astute pass to the latter, who expertly set for Pomykal's left-footed goal, which MacMath eventually saved. In the 52nd minute, Lletget, once more, attempted to take matters into his own hands as he sped through the midfield, but MacMath once more blocked his right-footed shot.

The Italian boss made a tactical switch in the 62nd minute by replacing Sergio Cordova with Anderson Julio as Real Salt Lake looked to go gung-ho. A minute later, the substitute almost got the game back on level terms when the attack started with an intelligent long ball by goalkeeper MacMath who found left back Brody’s overlapping run as the latter spotted Julio as an attacking option. Taking on Diego Luna in the box, the striker's effort was blocked by Paes before Dallas' defence was able to save it.

Paes looked in ominous form when Salt Lake won a free kick just outside the box in the 66th minute. The Dallas goalie made an outstanding save on Pablo Ruiz's left-footed curling shot.

The Masteroni Mastestroke eventually had come to the surface. Herrera played in a long cross from the right flank as Julio’s leapfrogged ahead of the Dallas defence and a glancing header towards the right post, which was out of Paes’ ability. Julio’s aggressive pressing and link-up were a reward for his outstanding header as the away side got the game back on level terms in the 69th minute.

Salt Lake searched for an equaliser. Savarino corner in the box was met with centre-half Justen Glad's towering header as a minor fumble by Paes was eventually gathered by the goalkeeper in the 72nd minute. Moments later, Paes kept out another cross, this time from Savarino, who dribbled his way past Martinez on the left flank, and the substitute rebound failed to put the ball back in the net.

F.C. Dallas arguably missed out on the game’s best chance in the 89th minute, when Pomkyal picked out Ariola’s searching run in the box and cut it back to Brandon Servania from a close-range shot that went over the bar.

As the game went deep into extra time, F.C. Dallas looked to launch in one more cross. In the 95th minute, substitute Jader Obrian played in a delicious cross to Jesus Ferreira’s left-footed flick that went marginally over the bar as the referee blew the full-time whistle.

Minnesota will now play against both teams, with Real Salt Lake first playing them at home followed by FC Dallas, who will be away the side a few days later.