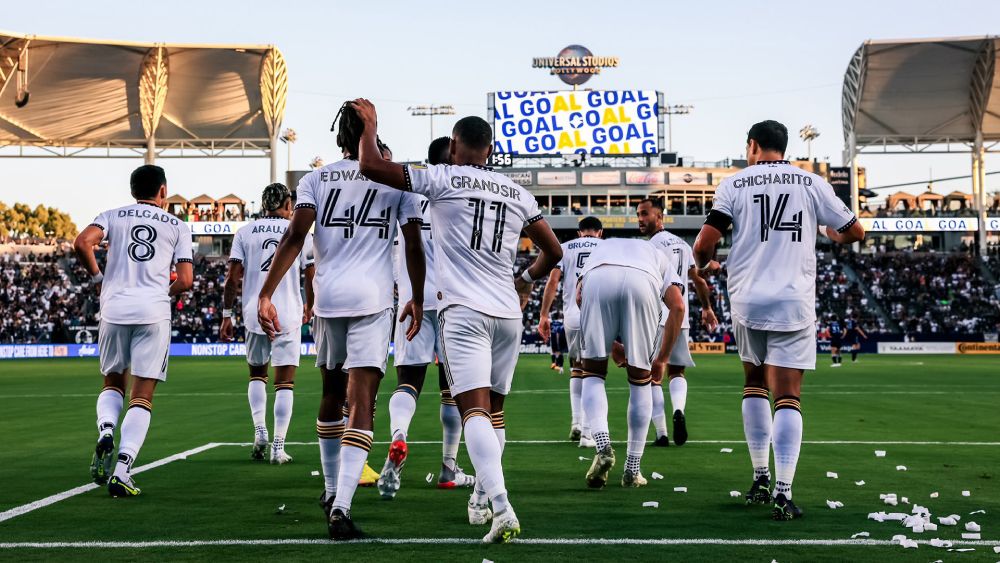 On Saturday, Los Angeles Galaxy delivered a goal-fest celebration of Julian Araujo and Riqui Puig’s birthdays. Spearheaded by a showboat of skills by Samuel Grandsir, LA Galaxy took an emphatic 5-2 win at home to Vancouver Whitecaps.


Right at the six-minute mark, Vancouver had the first clear-cut chance of the game. Ryan Raposo delivered an inswinging cross with his right foot from the left flank. The ball fell to Julian Gressel, the sole operator of the opposite flank, who did not score despite having broken away from Raheem Edwards.


On the other end, 10 minutes in, Grandsir launched an audacious left-footed cross from the left flank towards Kevin Cabral, whose subsequent header was well-parried by Cody Cropper. Less than two minutes later, LA Galaxy had the opening goal thanks to the same two players. As the hosts launched a seemingly innocuous ball from their defensive half, Jakob Nerwinski awkwardly mistimed his clearance, allowing the ball to fly through his legs.


The remaining Whitecaps centre-backs had miles to recover since Cabral, who promptly took the free ball under his stride, had the advantage. Reaching the 6-yard line, Cabral put a low cross into the path of Grandsir, who scored with a right-footed first-time shot.


In the 17th minute, as the Galaxy was on the counterattack from a visitors’ corner kick, Grandsir patiently waited to catch Vancouver out of transition. His attempt to flick the ball into the box was blocked, yet it still resulted in a handball infraction and a penalty. Chicharito calmly executed a panenka from the penalty kick to make it 2-0.


The contest grew ever livelier with the interplay between Whitecaps urgently seeking goals and Galaxy’s thirst for more. Much as the visitors needed one, it was the hosts that got the third. Outside Vancouver’s penalty box, Vazquez played a simple one-two with Chicharito and sent two Whitecaps players, pressing from behind, the wrong way. Then, from over 20 yards out, Vazquez thumped a shot into the bottom right corner, leaving Cropper no chance of saving.


The Whitecaps only managed one goal in the first half, which came in the 38th minute. From a Cropper’s long kick, Coulibaly was out of position for tightly marking Easton Ongaro, who intelligently dropped deep. Ryan Gauld quickly ran into the vacated space to fire a shot past Jonathan Bond, pulling it back by one goal.


Having failed to wrestle Gauld off the ball, Araujo redeemed himself. In the 40th minute, upon receiving the ball at the halfway line, the right back powered forward before launching a long, diagonal pass upon entering the offensive third. Even though the ball slipped past Chicharito, Grandsir emerged from the left of the Galaxy captain to receive it. Setting himself up with a neat first touch, Grandsir drilled the ball deep into the bottom right corner, giving the home team a 4-1 lead going into the break.


The second half of extra heat and extra goals


Seeing how they were exploited wide, the Whitecaps made three substitutions at half-time and switched to a back four. Their changes seemed to pay off when, in the 70th minute, from the left flank, Cristian Dajome jinxed past both Araujo and substitute Douglas Costa and penetrated LA Galaxy’s penalty box. From the edge of the 6-yard box, Dajome knocked the ball back to fellow substitute Tosaint Ricketts to make it 2-4.


Dajome lost his temper when Bond refused to hand the ball over for a quick restart. The Whitecaps winger wrestled LA Galaxy’s goalkeeper to the ground, got into a verbal argument with the hosts’ defensive players and got booked by the referee.


Less than ten minutes later, Dajome flew in and tackled Araujo. As the Mexico international lay on the pitch in agony, Dajome collected his second yellow card and was sent off, putting out Vancouver’s hopes of salvaging a point.


With one minute to go in official time, LA Galaxy flew forward after regaining possession. Marky Delgado launched the ball out to the left for substitute Dejan Joveljic. Faced with Gauld in the penalty box, the Serbian striker bamboozled the Scottish midfielder, leaving him on the ground, before feeding his fellow substitute Efrain Alvarez to settle a 5-2 victory at home.


This victory helped LA Galaxy remain in the playoff zone of the Western Conference with 33 points. The California-based club will remain home to host Seattle Sounders in the next outing on Friday, Aug. 19, with new signing Riqui Puig potentially making his debut.


This defeat left Whitecaps’ side three points outside the playoff zone with 30 points. On Wednesday, Aug. 17, the Canadian side will face another direct competitor for a playoff spot, Colorado Rapids, on home ground.