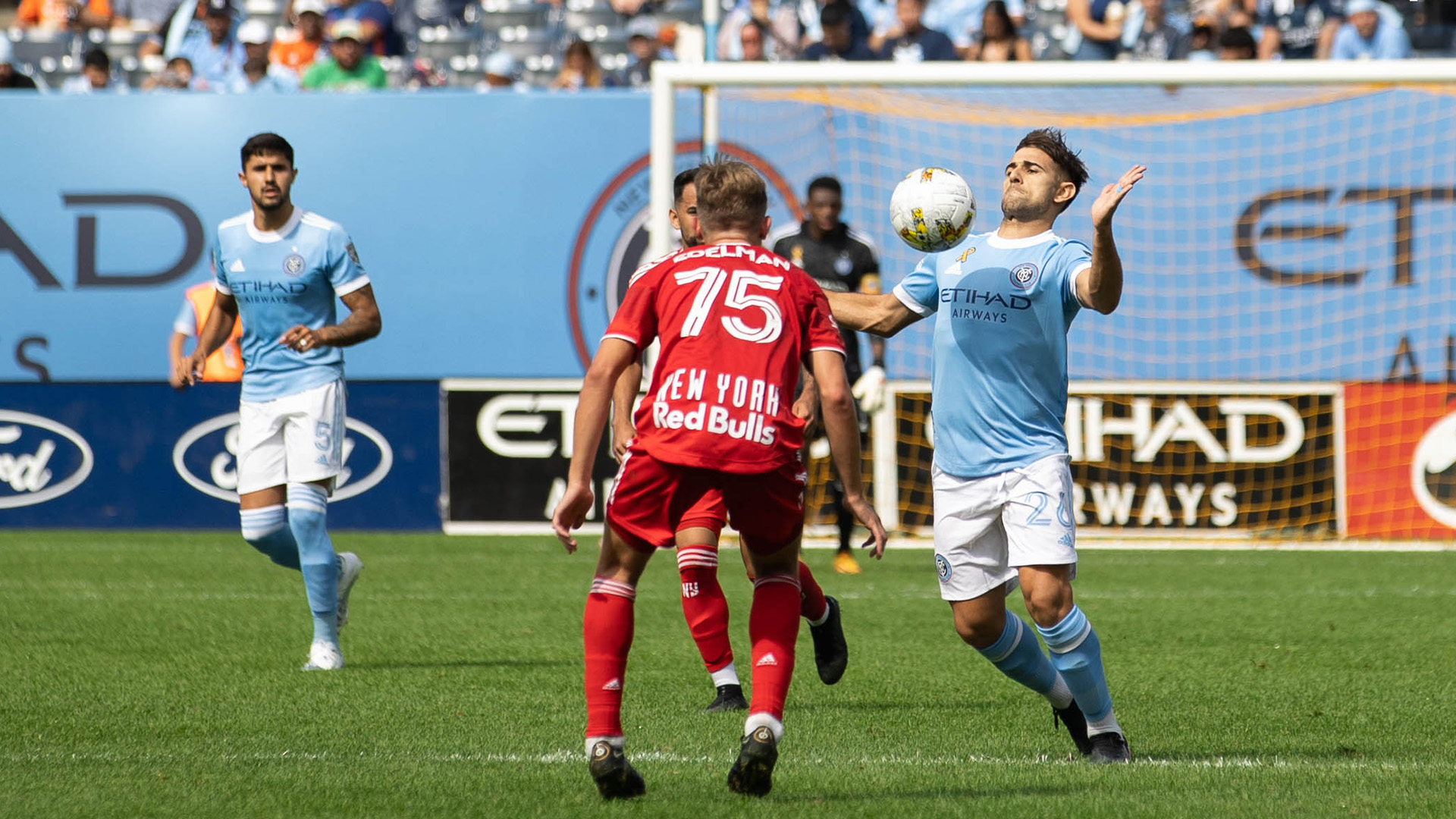 
New York City ended a run of five without a win by defeating local rivals New York Red Bulls in the Hudson River Derby to get their play-off push back on track at Yankee Stadium.


Nick Cushing’s men flew out of the gates and took the lead inside 60 seconds through Alexander Callens before Santiago Rodríguez doubled the home side’s lead just over twenty minutes later to make the game safe.


The Red Bulls hit the post and saw a goal chalked out for offside later in the first half but couldn’t find the decisive touch to make a fist of the contest.


Despite hitting their worst run of form of the season, NYCFC came out with the confidence of a side who had spent the campaign unbeaten, nevermind one without a victory since the 21st of August - taking the lead in the first minute through left-back Alexander Callens. Maxi Moralez delivered a poor-looking corner, but it was hooked towards goal by Santiago Rodríguez as Callens broke free from his marker to head home his fourth goal of a rather prolific season for the left-back. Despite the early setback, Gerhard Struber’s men almost found themselves level less than ten minutes later when NYC's keeper Sean Johnson fumbled a routine looking cross to the feet of Luquinhas. The Brazilian took a touch before firing towards a seemingly open goal, but the man of the hour, Callens, got back to prevent a goal and keep the home side in front. They would soon make Callens’ intervention count, as another Moralez corner confused before Gabriel Pereira redelivered towards Rodríguez, who fended off his marker to control and slot beyond Carlos Miguel with consummate ease. Much like after the first goal, NYB came back fighting and were very nearly level through Cristian Casseres Jr, but his shot from the edge of the area was deflected narrowly wide of the target. The resulting corner was headed away but only as far as Lewis Morgan, who whipped it back in looking for Aaron Long, who flicked the ball onto the post with Elias Manoel on hand to turn home the rebound. But the replays showed that the 20-year-old had strayed just offside from Long’s flick, with VAR ruling his strikeout.


Gerhard Struggles to ignite his side


The Brazilian then should have found the back of the net again at the start of the second half, as Morgan broke down the left and slid a ball across the Metro’s number eleven, but as he dallied on the ball and attempted to go around Johnson, the NYC skipper slid at the feet of Manoel and scooped the ball away, before Caden Clark fired the loose ball over the bar.


Despite starting well, the second half rather petered out from there barring a few flash points as the derby spirit began to take over, with the feisty Moralez at the heart of it, as he cynically tripped Daniel Edelman off the pitch, before he too was on the end of a robust tackle by Casseres Jr earned him a spot in the book. The Pigeons almost rounded off their biggest derby win since 2020 as a loose ball broke to Moralez after some good City pressure, but the Argentine’s curling effort was well saved by Miguel to keep the score to two.


The win alleviates some of the pressure on Nick Cushing’s men as they remain fourth in the east and just a point behind the Red Bulls, while Gerhard Struber’s men remain nine points behind Philadelphia in second following a second defeat in three to the side’s either side of them.