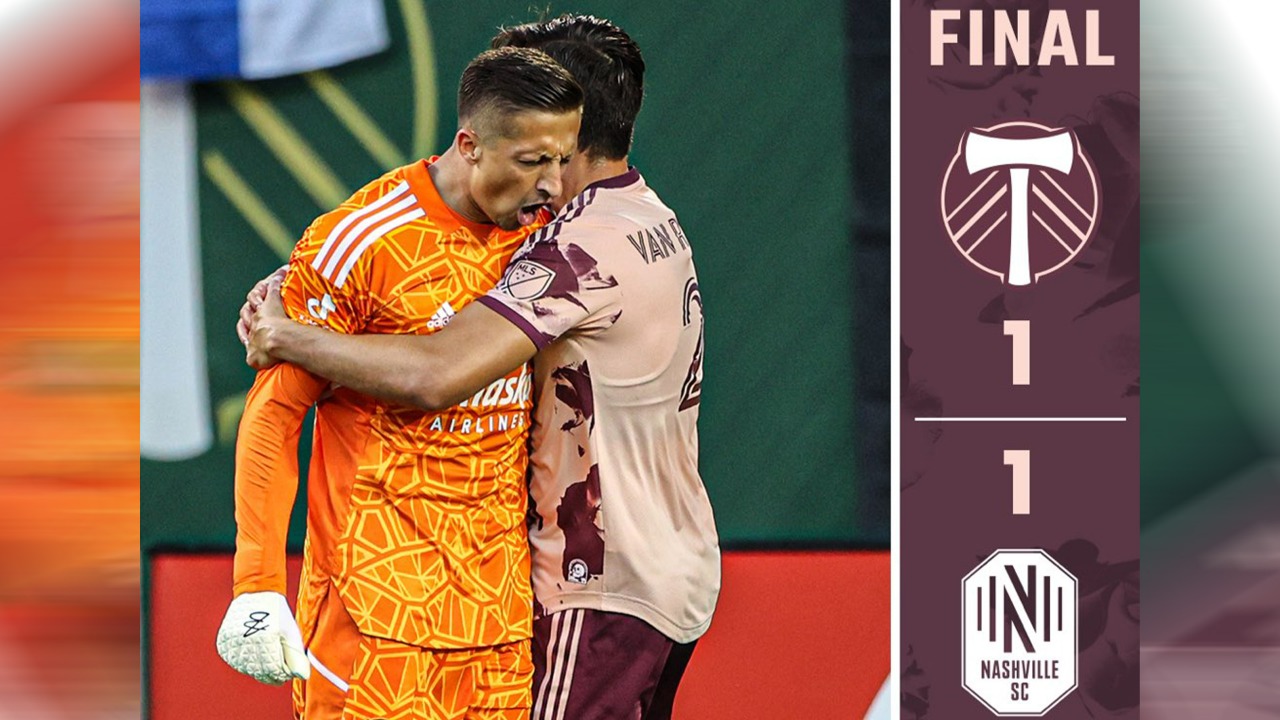 It ended honours even at Providence Park on Wednesday night as Portland Timbers and Nashville SC drew one apiece in a back-and-forth game between two of the West’s play-off contenders.

Santiago Moreno’s fine volley midway through the first half cancelled out Teal Banbury’s earlier head before Portland's keeper Aljaz Ivacic put in a Man of The Match display to ensure a share of the spoils.

The game began slowly until Moreno took matters into his hand, powering through the visitor’s rearguard to unleash a shot on goal, which Joe Willis did well to tip over.

It would prove crucial as, just two minutes later, Hany Mukhtar whipped in a corner which caused chaos in the Portland box.

The ball broke to Sean Davis, who unleashed a wayward effort on goal, which fortuitously found its way to Teal Bunbury at the far post, with the big centre-forward side-footing home his third goal in as many games.

During Nashville’s most recent outing against Vancouver, manager Gary Smith was accused of shutting up shop after taking a one-goal lead which eventually led to a disappointing 1-1 draw. But the sinking feeling came even quicker in Oregon.

Just seven minutes later, Portland took a corner of their own to Jimmy Chara, who shuffled his way inside the area and dinked a ball into the box. It was headed up rather than out, where it was met by Moreno, steaming into the box to volley home through the legs of Willis and level the scores at one each.

The match to-and-froed. Soon after Nashville was back on the attack, with Alex Muyl pressing Larrys Mabiala into a mistake deep in his half before the ball worked its way to Muktar, but Ivacic was equal to the effort and tipped it around the post.

It wasn’t long after until the Slovenian was called into action again, as Shaq Moore put in a teasing cross which evaded everyone before meeting Bunbury at the back post. But the in-form striker dawdled on the ball to give Ivacic a chance to make himself big and smother him from close range.

The second half started much like the first, slowly. While Muyl and Bill Tuiloma had half chances for either side, the opening 25 minutes were largely quiet amid a midfield battle which seemed to stagnate the contest.

Eventually, the game came back to life, with Walker Zimmerman flicking on a long throw into the direction of Muyl, who swivelled from little more than six yards and hit a left-footed effort towards goal. But Ivacic once again made himself big to deny the American.

Bunbury then failed to make contact from the rebound with Nashville. He was impeded by Dario Zuparic but Petrescu Silvio decided nothing was done and the play continued.

Down the other end, Nashville had their goalkeeper to thank as Willis did brilliantly to deny Jaroslaw Niezgoda as the polish forward chested a half-volley towards goal from the edge of the area. But Willis was equal to it with a fine diving save to tip it over.

The game seemed to be heading for a draw until the fourth minute of added time when Moreno brought the ball down in the centre circle and played an inch-perfect pass for substitute Nathan Fogaça.

He scampered through but was tracked by Dave Romney, who, with the help of Willis, forced the Brazilian wide to ensure he could only find the side netting.

Both sides remain 8th and 6th, respectively, with Portland hosting fellow play-off hopefuls Dallas next time out, while Nashville will welcome a struggling Toronto to Geodis Park.