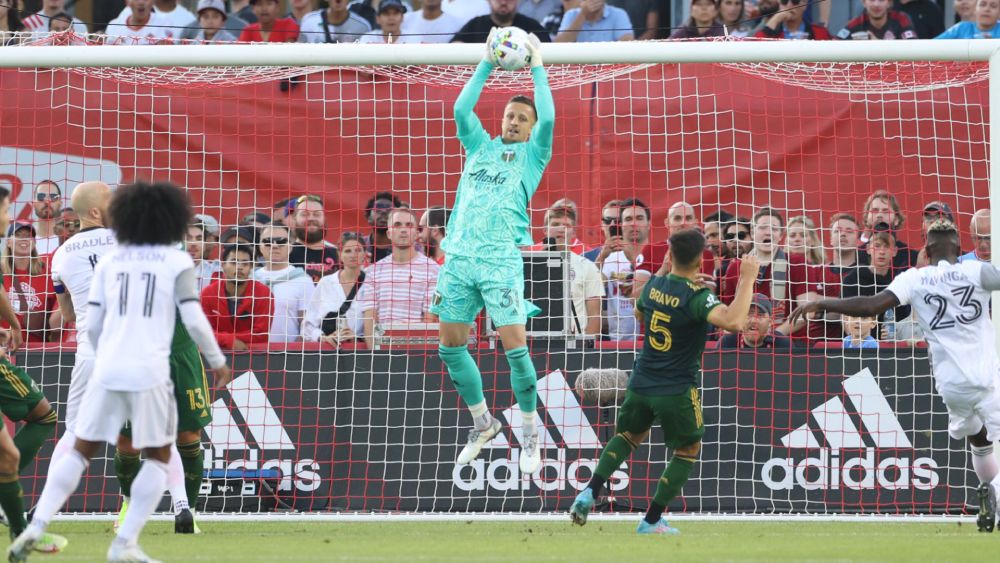 In the 25th round of the 2022 Major League Soccer season, Toronto FC hosted visitors from the Western Conference, Portland Timbers. With the backing of the home supporters, Toronto rose to the occasion and won the outing.


While both teams boasted a winning streak coming into the match, only one came out of BMO Field being able to sustain it. And, formidable as Portland’s 10-game streak - which spanned back to the beginning of June - was, the visitors could not withstand the constant pressure from the hosts. The highlight came in the final ten minutes when goals from Lorenzo Insigne and Federico Bernardeschi launched the Canadian outfit to a 3-1 home victory.

A dominant first half for the hosts


Despite entering the match with an inferior record, Toronto enjoyed a home advantage, with six out of seven wins in the 2022 MLS season coming from the home. And, on Saturday, BMO Field continued to be a fortress.


Toronto demonstrated their attacking prowess by progressing from both flanks within the first ten minutes. The relationship between Domenico Criscito and Insigne was indicated on the left. The technically sound Bernardeschi and the vivacious Richie Laryea, a loan player from Nottingham Forest, worked well together on the right.


In the 12th minute, Laryea dribbled down the right flank, reached the byline, entered the box and laid off a pass for any late runner. In the attack, Insigne passed through the legs of a Portland defender to find Bernardeschi, whose first touch sent him to an angle that was too tight to beat Aljaz Ivacic. In the 14th minute, Criscito attempted a similar pass from the left wing area into the space between the opposition’s defence and goalkeeper to Jimenez.


From a defensive standpoint, Toronto did it from the front: Their high press disconnected Portland’s back line from midfield, forcing multiple turnovers in the visitors’ half. When the Timbers decided to go long, Chris Mavinga and Lukas Macnaughton were there to challenge Sebastian Blanco and direct second balls into the possession of the hosts.


Constant pressure eventually yielded a goal in the 41st minute. From the right side, Laryea made a simple one-two with Insigne to bypass one opponent and dribbled past another. He reached the byline and continued driving towards the goal. From the edge of the 6-yard box, the right-back made an easy cut back for Jonathan Osorio, who blasted it past Ivacic to give Toronto a 1-0 lead. The half then ended without any added time.

A late scare for a timely wake-up


Compared to the first half, when the Timbers only managed a single shot, their prospects looked up in the second. They sought goals via flashes of individual brilliance, especially in the 55th minute when Santiago Moreno, from the edge of Toronto’s penalty box, threaded a pass through the right full-back and right-sided centre-back to Yimmi Chara. The close-range attempt did not lead to a goal but boosted the visitors’ morale.


In the 73rd minute, whereas Toronto was profligate, Portland was frugal. Running down the left flank, Yimmi Chara broke away from Mavinga and made a pass towards the penalty box. Blanco with his back towards goal, instinctively laid off the ball to Jose Van Rankin, arriving from the right flank. With the entirety of Toronto’s lineup zeroed in on Blanco, Van Rankin had the space and time needed to score the equalising goal, making it 1-1.


While a shock, the equaliser did not send Toronto looking for another goal frantically, but it did remind the hosts to be more accurate with their shots.


On the verge of the final 10 minutes, as Insigne was bursting into the left half-space, Michael Bradley flicked the ball into the winger’s path. As the ball bounced off a Portland defender’s back, the former Napoli player swung the ball dead into the top right corner and made it 2-1.


Realising how tenuous a one-goal lead was, Toronto pushed for more. Five minutes from full-time, on the edge of Portland’s penalty box, Bernardeschi glanced at the goal before turning his back towards it, calling for a pass. Upon receiving the ball from Laryea, the Toronto captain made a quick turn and decisively thumped the ball into the bottom right corner with his left foot. The stadium erupted because the players and supporters knew the goal would seal the game, which it did at 3-1.


With 29 points, Toronto FC is four points outside of the playoff zone. With their unbeaten streak now extended to four, they will look to push it even further on 17th August, when they host New England Revolution, with whom Toronto had a goalless draw away on 30th July.


For Portland, while they are now level for points, 33, with multiple oppositions within the play-off zone, the Timbers have played 26 games, more than any immediate rivals. In search of a playoff spot, on 21 August, Portland will pay another visit, this time to Sporting Kansas City, which sits at the bottom of the table.