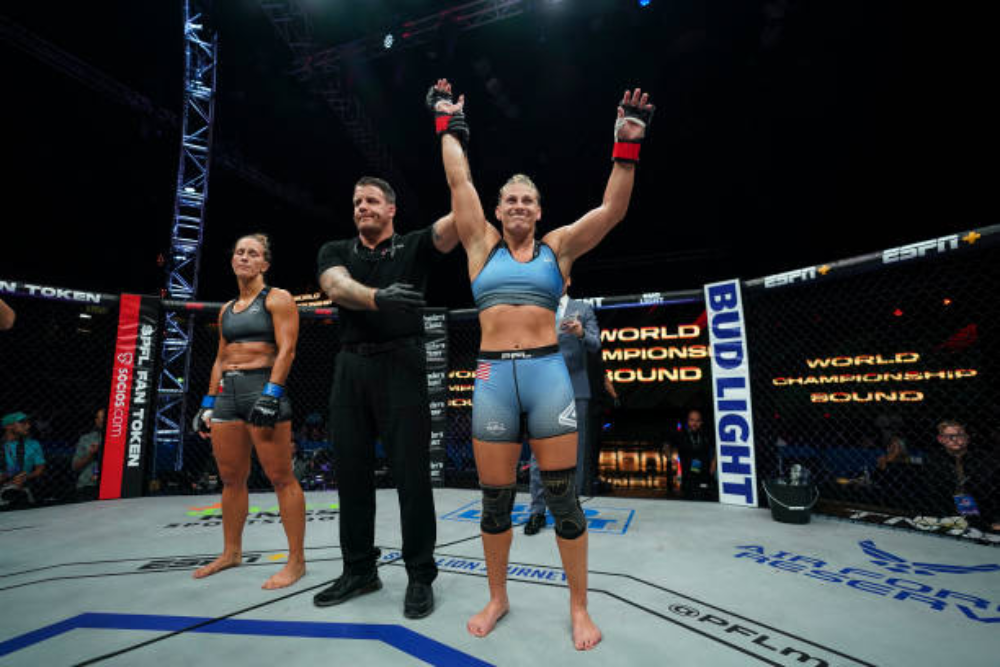 
The last night of playoffs in the Professional Fighters League 2022 season was in London, England. With the women’s lightweight and men’s featherweight tournament concluding, the playoffs and the fighters fighting for the last places in the PFL Season final, scheduled for November 2022.

In the main event of the evening, the star of the PFL, Kayla Harrison, delivered in dominating fashion, making light work of Martina Jindrova to send her through to her 3rd PFL Final in consecutive years. As expected, Kayla dominated from the off and needed over three minutes in round one to set up a trilogy fight in the final with Larissa Pacheco. Jindrova threw a kick, which Harrison caught, turning out to be the beginning of the end for Jindrova.

Kayla then expertly takes Martina to the ground, gaining side control. Despite surviving heavy punches, Jindrova finally tapped after Kayla and secured the arm-triangle choke. Kayla Harrison revealed after the fight that this likely be her last play-offs and fighting in the PFL season format. She will be concentrating on the PFL’s new pay-per-view model, which will be launched next year.

In the other women’s lightweight play semi-final, Pacheco was looking to set up a trilogy fight with Kayla Harrison by knocking out her opponent Helena Kolesnyk in the first round. This was a rematch of their battle in 2021, and Larissa needed even less time to KO her opponent. A fierce left hook sent Helena crashing to the floor. Larissa sensed a finish and continued to fire uppercuts on Helena before the referee finally stopped the fight. Impressive from Larissa Pacheco, who has only lost twice since leaving the UFC in 2015, both times to guess who? Yes, you guessed it, Kayla Harrison.

In the co-main event of the night, Brendan Loughnane secured his place in the men’s featherweight final in front of his home crowd, defeating Chris Wade by unanimous decision (30-27 on all three scorecards). After the fight, Brendan stated that this was the best performance of his career.

The start was cagey with both fighters getting a feel for one another. Despite Wade taking Loughnane down in the first round, Brendan finished the round stronger with his impressive striking ability on show. Brendan’s superior ability on the feet won him the fight, with either fighter reluctant to take the fight to the ground. Despite clipping Brendan in the 2nd round with a kick Wade just couldn’t get on top in the fight. Brendan finished stronger, taking the last round 10-9.

In the first of the four semi-finals of the night, Bubba Jenkins sent out a message that he is a serious contender for the featherweight title by submitting big puncher Ryoki Kudo in the first round. Even though Bubba was the favourite coming into the fight, it was still impressive from Bubba, who immediately suplex Kudo twice, throwing him around the cage with ease. Kudo did get back to his feet and looked to have gathered his bearings before Bubba again took Ryoki to the canvas taking his back and forcing a tap from Kudo in a rear naked choke position. Bubba will undoubtedly fancy his chances of doing the same to Brendan Loughnane in the final.