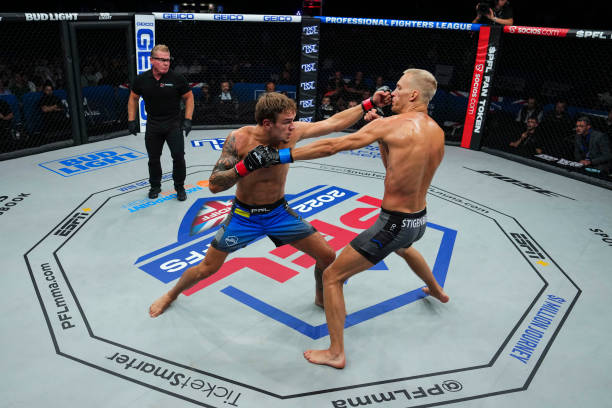 
The third and final PFL playoff round kicks off Saturday night in London, England. The debut show in England will play host to the start of the playoffs for the Women’s Lightweight division, with the men’s Featherweight division on the card also.

Headlining the card will be arguably the biggest start of the PFL undefeated Kayla Harrison (13-0 in PFL) vs Martina Jindrova (2-0 in PFL), who is also undefeated so far in the PFL (3-0). The problem for the PFL is finding their biggest star Harrison a challenge. In her first fight of 2022, she lacked motivation and laboured to a points win over Marina Moknatkina.

However, she did earn a quick KO over late replacement Kaitlin Young on 1st July with an impressive ground and pound victory. Jindrova has a tough task on her hands to defeat Harrison. If she can keep the fight on the feet, she does have a chance of an upset. She possesses a bigger reach than Harrison and is also an elite kickboxer. She can’t let Harrison close the gap and allow Kayla to take her down.

The co-main event will see English fighter Brendan Loughnane (6-1 in PFL) take on Chris Wade (10-4 in PFL). Unbeaten in 2022, Brendan will be looking to extend this record in front of his home crowd. Despite being unbeaten this year, Loughnane has looked far from impressive in his two previous fights against Ryoji Kudo and Ago Huskic. Being dropped to the canvas early on, Kudo managed to get a somewhat technical decision after the two fighters clashed heads.

In the fight against Huskic, he was far from convincing. Brendan’s opponent Chris Wade is a former UFC fighter who reached last season's final, losing by a unanimous decision to Movlid Khaybulaev. Chris comes into this fight as the favourite, and you can see why impressive wins over Lance Palmer and Kyle Bochniak in the regular season give him the edge over Brendan in many people's eyes.

The other semi-final in the men’s featherweight division is between Ryoki Kudo (1-1 in PFL) and Bubba Jenkins (4-1 in PFL). Both men have lost to the other semi-finalists, with Kudo being beat by Brendan Loughnane and Jenkins losing to Wade in August 2021. This fight is a rage between two styles, Kudo is the striker, and Jenkins is the Wrestler.

Jenkins comes into this fight on the back of two decision wins over Kyle Bochniak and Reinaldo Ekson, whilst Kudo lost to Loughnane but bounced back to beat Alejandro Flores by KO in the first round. Jenkins is the favourite coming into this fight. If he gets his hands on Kudo and takes the fight to the ground, it could be a long night for Ryoki, but Bubba does have to be careful coming in and not being caught by one of the Kudo’s big punches.

Larissa Pacheco (6-2 in PFL) takes on Helena Kolesynk (2-2 in PFL) in the women’s other Lightweight Semi-Final with Pacheco being the heavy favourite. She is a two-time Olympic Gold medallist and is looking for the chance to fight Kayla Harrison for the third time, who she lost both times to a unanimous decision, with the last being in December 2019.

This bout with Kolesynk is a rematch of their fight in 2021, where Pachecho knocked out Helena in the first round with an excellent combination. Larissa can do the same this time, and KO Helena, who does not possess the power to trouble Pacheco, as proven in the first fight. Larissa can set up a trilogy in the final with Kayla Harrison.