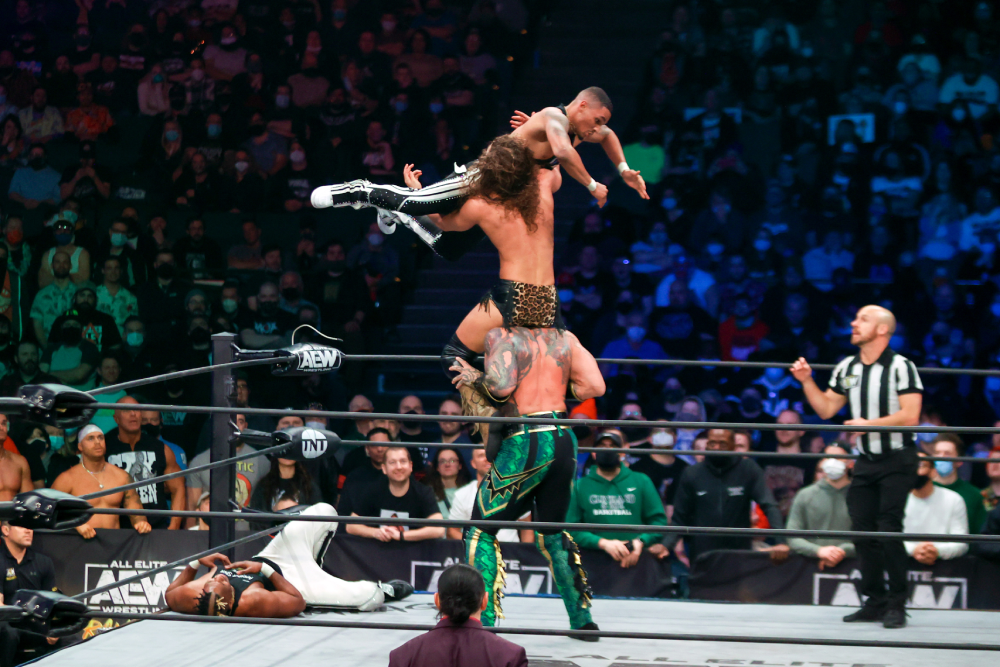 We are only four days away from All Out, and things are heating up, only without the scheduled main event. Moxley is our first segment of the show and should be interesting, considering the Champion just dethroned Chicago's favourite son last week.

Moment of the Night | This is Chicago!

Jon Moxley didn't just come out with Wild Things but had some wild things to say by starting the show with an impromptu promo. Stating how he had conditioned his physique to last for another 57 minutes, but the Chicago native CM Punk could not.

The AEW World Champion didn't have any sympathy for Punk, who folded. True champions never fold. For that reason alone, Punk exposed himself to the world on live television. However, as there wasn't a match announced for the All Out main event, Jon Moxley handed out an open contract, signed by him, for anyone who would want to face the top dog of this brand.

He leaves the contract inside the squared circle for anybody willing to step up to take on the challenge. Unexpectedly, we see Ace Steel from backstage rush into a pocket of the orphaned contract and leave everyone in dismay.

Several segments later, we have CM Punk come out to speak. He looked rather emotional, and Chicago lent out their ears to him. The former AEW World Champion laments letting his fans down by rushing in to settle the score against Jon Moxley. He credits his pulverised foot injury for the shocking loss from last week.

He questions whether his love for wrestling was enough to propel him anymore. But Ace Steel comes to interrupt his former student. Steel tries to talk sense into a dejected Punk and instils the lacking confidence. Fueled by the crowd's reception and Steel's sharp words, Punk decides to accept Moxley for a rematch at All Out.

Punk says they've been trying to kill him since he was born, but Moxley isn't someone to put him down because THIS IS CHICAGO. The crowd erupts, and Punk goes into the audience to declare war on Sunday.

Surprise of the Night | A big one

The Wingmen protested about not being featured around. They proclaimed that from now onwards, Dynamite is their show. Surprisingly we hear unfamiliar music with a known video package on the titantron. Impact star W. Morrissey makes his second AEW appearance out of plain thin air.

As the spectators speculate over his motives, Morrissey wastes no time in going after the Wingmen- one after another. The giant clears the house, and we see the cunning businessman, Stokely Hathaway, approach the ring. Peter Avalon decides to take Morrissey down, but obviously, it is a bad idea! He suffers the worst of it by getting a massive chokeslam to end his night. Hathaway enters the ring, observes Morrissey, and then hands out one of his business cards. From the looks of it, we have Hathaway's entourage lining up.

You could cut the tension with a knife. Such was the animosity between Will Ospreay and Kenny Omega. Aussie Open and the Young Bucks were the only exciting backdrops to this storytelling. Right from the start, Omega and Osprey slug it out to start. Their partners rush in, and in a moment's lapse- pandemonium.

It has been the case for every Trios match. Everything cracks down. We see high-flying dives from the Bucks onto the Aussie Open. Ospreay is unnoticed as he performs a spinning dive to take the brothers out. Omega was then clotheslined to the floor by Ospreay.

After a break, we see the Aussie Open beating on Matt Jackson, who sends them reeling after coming with hurricanranas to hot tag Omega. Kenny entered and landed a Kotaro Crusher on Davis for a two count. Omega fires up and starts to dominate until his V Trigger gets nullified. These two continue with newer offences from their arsenal.

Omega goes to the top, but Aussie Open sees to it. They give him a delayed superplex, to which Nick Jackson broke the landing. Ospreay tore Kenny’s compression shirt, revealing bandages on his stomach and shoulder. After another commercial, we come back with Nick having an epic comeback cleaning house but getting caught by his 450 splash, which gets Ospreay’s raised knees. Kenny comes in, and it's Omega vs Ospreay again. They go back and forth with the forearm shots, and a sit-out powerbomb plants Omega. Aussie Open lifts him to set up for an Oscutter, but Matt counters it into a cutter of his own.

Omega is up and lands in the triple knees, but Ospreay makes the save in time. A Meltzer Driver is all it took for the Elite to come the closest, but it gets a two with Omega following up with a V Trigger, which gets broken up. The Indytaker gets only a two, and then the finale ensues as Kenny finally hits a great-looking V Trigger and follows it up with the One Winged Angel to finish Davis at 18:53.

This ordeal perfectly sets up the impending showdown between Omega and Ospreay. The crowd was into it from bell to bell. This is how you hit a home run before the pay-per-view.