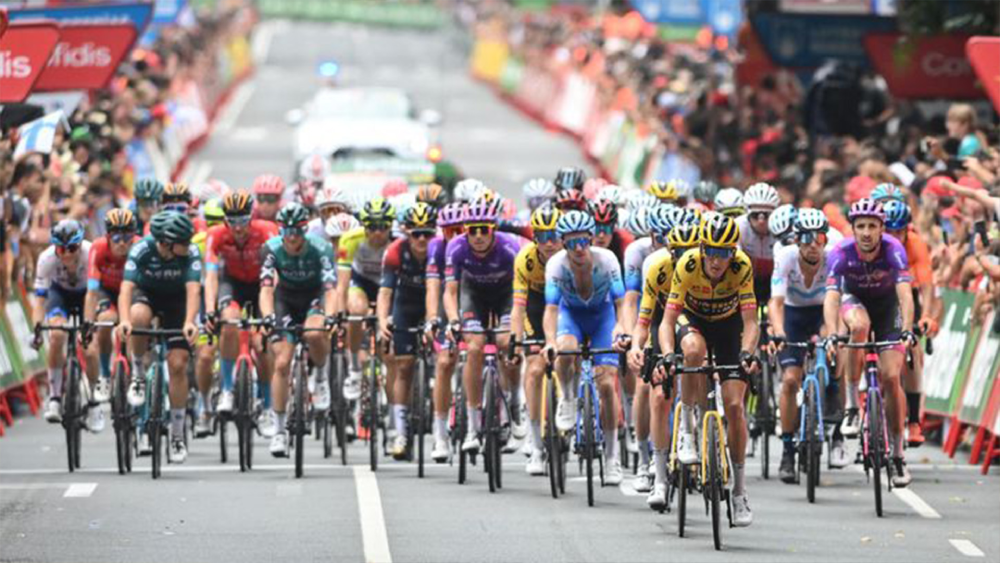 
Despite la Vuelta beginning in unfamiliar surroundings this year, a sense of normality was restored on stage four as Primoz Roglic took the red jersey that has felt like his own in recent years.


But those expecting a procession to Madrid had another thing coming, as he only spent 24 hours as the race leader, having been knocked off the top spot by Frenchman Rudy Molard on the road to Bilbao.


On the second of two hilly stages in the Basque Country, setting off from Irun, Marc Soler bridged across from the peloton to an eighteen-rider breakaway. Then he kept his foot on the gas, taking the victory on the 187.2km stage as the remains of the break failed to catch him in the final kilometre.


Part of the break and forth over the line, Groupama FDJ’s Molard had done enough to take the race lead from Roglic, who came in as part of the peloton over five minutes later. Molard’s lead is slender; he is only two seconds ahead of Fred Wright of Bahrain Victorious, who finished the stage in third and now possesses the white jersey.


Roglic has slipped down to fifth in the general classification and now has 4’09” to make up on Molard. The Frenchman is now a stranger to Vuelta leadership, having spent four days in red in 2018.


Nikias Arndt and Lawson Craddock - both members of the stage 5 breakaway - make up the top five places in the overall race lead.


All eyes have been on Roglic since the team's presentation in Utrecht, as only the fourth time in its long history, La Vuelta got underway outside Spain, with the Netherlands used as the venue for the Gran Partida for the second time.


The Slovenian, winner of the last three editions and gunning for a fourth title, returned to action for the first time since abandoning the Tour de France last month.


Vying to take the jersey from the Team Jumbo-Visma leader were the two most recent runners-up; Enric Mas and Richard Carapaz. Australia’s Jai Hindley - winner of this year’s Giro d’Italia- also lined up with high expectations, as did the last man other than Roglic to stand top of the podium in Madrid; Simon Yates of Great Britain.


The curtain raiser to this year’s event was the first Team Time Trial at la Vuelta for three years, in the form of a 23.2km jaunt around a drizzly Utrecht.


FDJ’s lead did not last long as Australian team Team BikeExchange-Jayco bested them by seven seconds, posting a time of 25 minutes and 11 seconds. This lead proved hard to beat, as the UAE Team Emirates and Bora-Hansgrohe finished slower despite the drying conditions.


BikeExchange’s time was beaten by Ineos Grenadiers, who went eighteen seconds quicker. Quick-Step Alpha Vinyl came agonisingly close, one second off the pace, while the home favourites, Team Jumbo-Visma, were the last team off the start ramp.


Roared on by the local support, Primoz Roglic among their ranks and three men riding on home tarmac, Jumbo-Visma crossed the line in a time of 24’40’’ to take the opening stage win.


There was still room for sentiment; 36-year-old Dutchman Robert Gesink was the first Jumbo-Visma man to cross the line, meaning he would wear red on stage two. Primoz Roglic had already gained a minimum of 13 seconds on every rival in the race.


Unsurprisingly in the famously flat nation, stages two and three were suited for sprinters to battle it out in bunch finishes. If stage one was a celebration for the Dutch, then the rest of the time in the Netherlands belonged to one electric Irishman.


On stage two, a 175.1km ride from ‘s-Hertogenbosch back to Utrecht, Sam Bennett of Bora-Hansgrohe held on to beat Mads Pedersen and Tim Merlier in a bunch finish to take the win.


What made it more impressive was this was Bennett’s first individual stage on a Grand Tour for two years, having been plagued by a persistent knee problem since early 2021.


It was as if the 2020 Tour de France green jersey winner had never been away, and the result was enough for him to be donning the same colour at the end of the day.


Fourth on the day was enough for Jumbo-Visma’s Mike Teunissen to become the second Dutchman riding for a Dutch team to wear the red jersey on the Vuelta’s Dutch weekend.


But Bennett was not about to relinquish the spotlight. The final day in the Netherlands was reserved for the longest stage of the entire race - 193.5km starting and finishing in Breda - and with it being almost flat, it was another ideal day for those competing for the maillot Verde.


A seven-man breakaway featuring former Vuelta stage winner Thomas De Gendt went up the road but was never given too much leeway by Bora-Hansgrohe at the front of the peloton, as they never let their lead exceed much more than three minutes.


A crash that looked innocuous at first proved costly for Israel Premier-Tech’s leader Michael Woods, as he was forced to abandon the race with a concussion. He is one of only three riders out of the race thus far.


The breakaway was caught with 12km to go, allowing the sprinters’ teams to start jostling for position at the front.


But the work Bora-Hansgrohe had done earlier paid dividends, as in the final 100m, the green jersey stormed past Mads Pedersen and Dan McLay, holding on for back-to-back stage wins. The County Tipperary man is now up to five Grand Tour stage wins, half of which have come in the Spanish tour.


Jumbo-Visma’s game of Pass Red Jersey continued, with Edoardo Affini now the overall leader. But thanks to Julius van den Berg of EF Education-EasyPost picking up one more mountains point, the Vuelta left the Netherlands with one rider sporting a leader’s jersey.


After a day off to travel from the Netherlands over to Spain, the Basque Country took centre stage.


Beginning in its capital, Vitoria-Gasteiz, and travelling 152.5km to Laguardia, it would be the first chance for the GC contenders to stretch their legs, with a category two and category three climb to overcome, plus plenty of other hills in between.


Alexey Lutsenko - less than a minute down on the race lead - was part of a six-man break that went over the category 2 Puerto de Opakua led by Joan Bou of local team Euskaltel-Euskadi.


By the time they reached the final climb, that attack had been neutralised by a thinned-out peloton. Roglic got over it first, ahead of Julian Alaphilippe.


The favourite had kept something in reserve for the uphill finish, though. Roglic powered past Enric Mas and his other challengers in the final punch to the line, taking a stage win and the maillot Rojo, holding a 13-second lead over teammate Sepp Kuss.


Spare a thought for Mads Pedersen. The Dane, who can stick it out with the best climbers, came second for the third stage in a row! His efforts at least allowed him to close the gap to Sam Bennett down to nine in the points classification.


The gap was still the same twenty-four hours later as the sprinters did not contest either sprint on stage five with the big group up the road, while 13 points gained in one day was plenty for Monaco’s Victor Langelloti to take the polka dot jersey. The Burgos-BH man is the first Monegasque rider in a Grand Tour and is already making a name for himself.


Stage 6 sees the race roll into Cantabria as the riders race from Bilbao to Pico Jano. With the first two categories, it will be the first chance for Primoz Roglic to hunt the red jersey down.