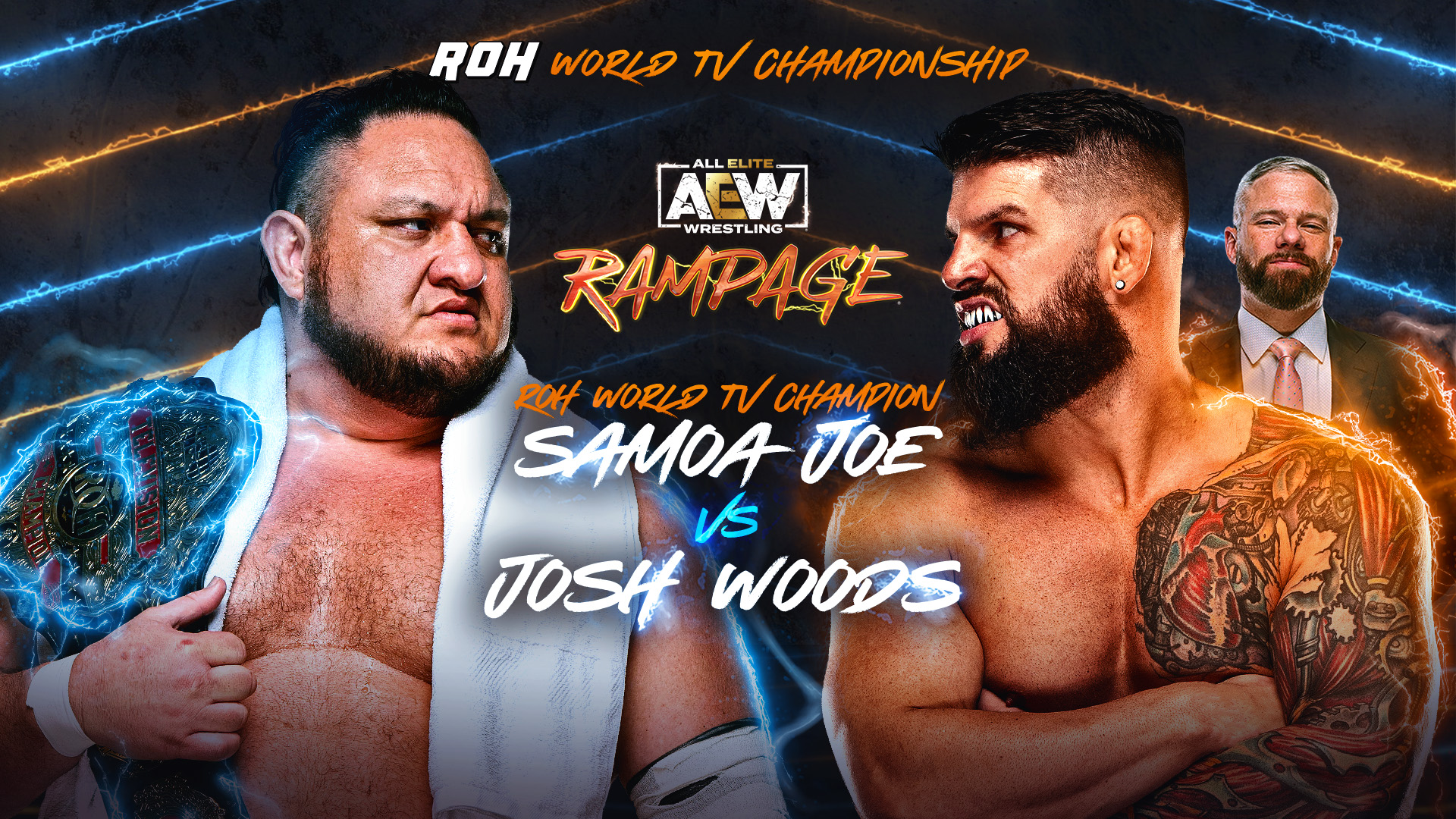 This week’s Rampage starts with a kick-off match between Matt Hardy and Darby Allin. They shake hands with each other before going into the clinch. They try a couple of arm twisters on each other to get an advantage before Darby slams Hardy to the ground. They stand up, and Matt tries to sprain Darby’s hand on his shoulders with a series of snaps.

Darby gets Matt’s head in a lock while Matt tries to pick him up to slam him. But Darby throws Matt over his shoulders, keeping a lock on his head. They get up, and Matt tries to slam him again, but Darby somersaults backwards to escape the slam. Matt's shoulder barges him to the ground and shouts Delete at him. Darby tries to pin him with a crucifix cover, but Hardy escapes.

Matt goes over the rope, and they fight on the outside for a while. Darby throws Matt at the steel steps, which hurts Hardy. With Matt lying at the side apron, Darby goes to the top rope to try a Jeffy Hardy special Swanton Bomb on Matt, but he gets away with Darby landing on his back on the ring apron. Matt powerbombs Darby onto the ring post and throws him into the ring. Matt pulls him by the legs and arms against the post as the coverage goes into picture-in-picture for the first commercial break.

Matt continues to dominate him in the ring and throws him into the turnbuckles. Matt tries a pin for cover, but Darby kicks out. Darby throws an elbow on Matt and pins a cover with a monkey flip, but Matt kicks out. Then, Matt hits a Side Effect and goes for the cover, but Darby kicks out. Matt hits a shoulder slam and shouts Delete at Darby, who is on the ground. He goes for the Twist of Fate, but Darby locks his shoulders and pins Matt over his back for a two-count.

Darby then reverses another move by Hardy into a scorpion death drop. The ref starts the count with both wrestlers on the ground. Darby then goes to the top rope but Matt gets up and hits a BT bomb on him and goes for a two-count.  Matt Hardy does a moonsault from the top rope, but Darby moves away. Then, Darby hits a Code Red for a two count, but Matt kicks out. Darby then goes for the Last Supper and gets the win.

There was much respect from both the men during the match. But as Darby leaves the ring, lights go out, and Brody King and Julia Hart appear and attack Matt Hardy. Brody calls out Darby and Sting and says it’s not over. He challenges Darby and Sting for a no disqualification match against the House of Black at Grand Slam. He then proceeds to lock Matt’s head over the ropes as Julia sweeps his legs off. Darby accepts the match, and they disappear as the lights out.

After the break, ROH champion Claudio Castagnoli comes out with Wheeler Yuta. Tony Schiavone hands him the mic, and Castagnoli says that his title represents honour while Blackpool Combat Club is the new symbol of excellence. It’s a team and family, and they make each other better. He says that while Yuta lost his Pure Championship to Daniel Garcia, he knows he'll get back up because the best lesson you learn is when you lose and win the title once again. Castagnoli then says that his match last week on Rampage against Dax Harwood was one of the hardest of his career and says that the match between Jon Moxley and Bryan Danielson guarantees that Blackpool Combat Club will hold at least two titles.

Jericho interrupts and says that the Jericho Appreciation Society is the symbol of excellence and that he should be the one competing for the AEW World Championship at Arthur Ashe Stadium. Castagnoli says he tapped out, and the crowd chants “You tapped out!” before Jericho bellows at them to shut up. He challenges Claudio for the ROH title at Arthur Ashe Stadium at Grand Slam which Claudio accepts.

Then we cut off to a short pre-taped video of Lexy Nair and The Baddies. Nair asks what's next for Jade Cargill. Kiera Hogan butts in saying that all the winning is getting boring. Jade says she has no one left to compete in the locker room, and it’s a clean slate. Diamante interrupts and says that if Jade wanted a contest, all she had to do was ask. She challenges Cargill for her TBS Championship at the Grand slam.

Penelope walks out with Kip Sabian to face Willow Nightingale. The bell rings, and Nightingale hits Penelope with a shoulder block. She hits a body slam, then goes for a pin, but Ford kicks out. Penelope kicks her against the ropes and hits a double knee to Nightingale from the top rope. After the break, Ford still beats on Nightingale. She starts wearing Nightingale down before Nightingale delivers a shoulder tackle that sends Ford into the ropes. Willow throws a high foot before hitting her with a Spinebuster. Ford then hits Willow with a stunner. Ford goes to the top rope to jump on top of Willow, but Willow moves away and throws Penelope against the ring ropes. Willow goes for a backslide count. Ford hits a pump kick, then sends Nightingale to face first into the mat. Ford locks Willow in the Indian Death Lock, and she taps out.

Then we cut to a short video for an interview with Dark Order and "Hangman" Adam Page about the Golden Ticket Battle Royale for the AEW world title. Page apologises for screwing up and costs them the match.

It cuts off to a promo from Ricky Starks. He says no more talking. He admits Powerhouse Hobbs did what he set out to do and put QT in his way and threw off his trail. He says Hobbs has his full undivided attention, and Hobbs needs to think about everyone he loves in his life. Starks says that he will see him personally in New York next week.

After the usual pre-match interview with Mark Henry, Joe and Woods made their way to the ring for the main event. The bell rings, and the two guys shake hands to observe the Code of Honor. They lock up before exchanging blows and shoving and pushing each other. Woods locks Joe in a rear choke hold, and the two men exchange forearms. Woods goes out of the ring, and Tony Nese pulls Joe’s arm over the ropes while Mark Sterling distracts the referee. We go into picture-in-picture for the commercial break as Woods dominates Joe on the ground.

Nese distracts the referee. Sterling gets the attention of Samoa Joe, allowing Woods to roll Joe up for a pinfall. Joe kicks out, and Woods hits him with a knee. Woods gets a two-count. Joe hits Woods with the STO and throws Nese off the apron, followed by the Muscle Buster for the win.

After the match, Nese and Woods attack Joe from behind. Sterling grabs the ROH Television Title and goes to hit Joe with both Nese and Woods holding his arms, but Wardlow comes into the ring. Joe hangs on Sterling's leg and prevents him from escaping. Wardlow sets up for the Powerbomb Symphony on Sterling before Nese saves him by pulling him out of the ring. Wardlow and Joe show respect to each other before touching titles and holding them up, and they shake hands as the show goes off the air.