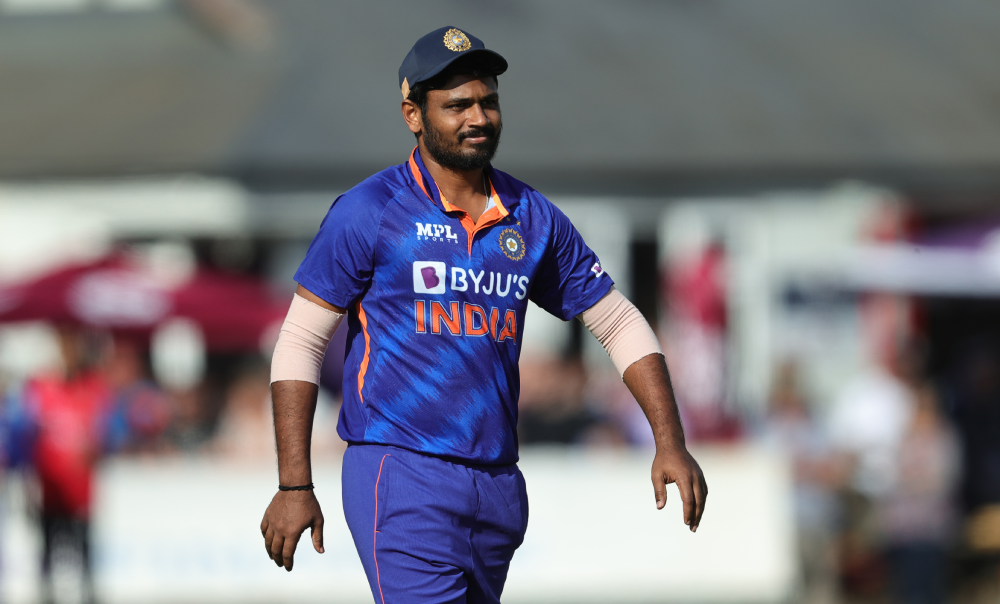 Sanju Viswanath Samson, 27, Skipper of Rajasthan Royals and Kerala State cricket team, is a right-handed top-order batter and wicketkeeper. Sanju was Born on 11th November 1994, in Pulluvila, a coastal village near Vizhinjam in the Thiruvananthapuram district of Kerala. Sanju started his cricketing career in Delhi. When Sanju didn’t make it into the Delhi U-13 team, his father, Samson Viswanath, a football player and police constable at Delhi Police took voluntary retirement from the Delhi police force and from football to move to Kerala, where Sanju continued his cricketing career.

Sanju made his debut for the Kerala U-13 cricket team in 2007. Since then, he never looked back and has witnessed a whopping success in junior cricket. Starting with the KSCA Inter-State under-13 tournament, he captained Kerala and bagged the player of the tournament award after scoring 973 runs, including four centuries in five matches at an average of 108 runs. As a member of the Kerala U-15 team for the 2008-09 Vijay Merchant Trophy, he scored a double century against Goa and finished the tournament as the second-highest run-scorer with 498 runs, including two centuries and two fifties. This double-century in the Vijay Merchant Trophy paved way for Sanju to the Kerala Ranji Trophy squad for the 2009-10 season. Then aged 14, he was the youngest Kerala cricketer to be selected to play in Ranji Trophy. Later, He also captained Kerala in U-16 and U-19 tournaments.

His performance in the 2010-11 Cooch Behar Trophy earned him a spot in the India U-19 team for the 2012 Under-19 Asia Cup held in Malaysia. However, his dismal show in the tournament meant he missed getting selected for India's squad for the 2012 Under-19 Cricket World Cup. Sanju was signed by KKR in the 2012 IPL season but didn’t get a single game. Unshockingly, he was released ahead of the 2013 season. Then, he was signed by the Rajasthan Royals and made his IPL debut in 2013. He played 11 games that season, and in his second match, he scored 63 runs from 41 balls, becoming the then youngest player in IPL to score a half-century. Sanju amassed 206 runs in his maiden season, which won him the Emerging Player of the Year.

Later, he was named vice-captain of the India U-19 team for the 2013 Under-19 Series in Australia. He was also named the vice-captain of the Indian U-19 for the 2014 Under-19 Cricket World Cup. He featured in the 2014 and 2015 IPL seasons for Rajasthan Royals and has played mostly all the matches, gathering 339 and 204 runs, respectively. His run in IPL got the attention of the selectors, and In August 2014, Sanju was selected in India's 17-man squad to play in five ODIs and a T20 against England. However, he did not make it to the final eleven in any matches and remained a backup keeper to MS Dhoni. The prime reason for the same was MS Dhoni leading the national side and doing so well. In October 2014, he was called to the T20 team to play a solitary game against West Indies, which later got cancelled. In December 2014, he was named on India's 30-member list for the 2015 Cricket World Cup but didn’t make it to the Indian Squad for the world cup. In July 2015, he was drafted into the Indian squad against Zimbabwe for an ODI and two T20I matches as an injury replacement for Ambati Rayudu. He made his T20I debut against Zimbabwe in Harare on 19 July 2015. After a top-order collapse, Samson added 36 runs in the sixth wicket, along with Stuart Binny in a low-score chase. However, he couldn’t win the game for India, and the team lost the match to Zimbabwe by ten runs.

After earning his India cap, Sanju was named the captain of Kerala for the 2015–16 Ranji Trophy season. Then aged 20, he was the youngest Kerala player to captain the state in Ranji Trophy. He began the season with a ton but failed to convert it into a successful season. Sanju was the leading run-scorer for Kerala in the 2017–18 Ranji Trophy, with 627 runs from seven matches. In a must-win match against Saurashtra, he scored 68 in the first innings and smashed 175 in the second innings helping his team claim a 309 runs victory and quarter-final berth. Samson was one of Kerala's finest players as they went on to participate in their first Ranji Trophy quarterfinal this season.

He scored an unbeaten 212 in the 2019-20 Vijay Hazare Trophy in the sixth instance an Indian scored a double-century in List A cricket, which is also the second-fastest double ton in the format. In continuation of his form in the domestic season, In October 2019, he was recalled to the Indian side after four years as a part of India's T20 International squad for their series against Bangladesh but was benched in the whole series. In November 2019, he was added to the Indian team for the T20I series against West Indies after an injury to Shikhar Dhawan but didn’t get the game. In December 2019, he was named in the T20 squad to play against Sri Lanka. He featured in the third T20I and was dismissed in the second ball after hitting the first for a sixer. He was selected for the T20I series of the India tour of New Zealand, replacing an injured Shikhar Dhawan but failed to create the desired impact with the bat with a string of low scores.

In October 2020, he was named in India's T20 International squad for their series against Australia. In June 2021, he was named in India's One Day International and Twenty20 International squads for their series against Sri Lanka. He made his ODI debut on 23 July 2021 for India against Sri Lanka and scored 46 runs. He was disappointed with the bat in the T20 series in which a depleted Team India lost to Sri Lanka. As a result, he missed out on the Indian squad for the 2021 ICC Men's T20 World Cup, held in October 2021.

Sanju is a naturally aggressive and elegant batsman with a natural talent, quality batting techniques, and wicket-keeping skills. He is considered an excellent timer of the ball and compared with the likes of Rohit Sharma and AB DeVillers for his ability to tackle the short ball well. He has the ability to time the ball with perfection and hit sixes effortlessly. Equipped with fast hands, powerful forearms and excellent hand-eye coordination, he prefers to play aggressive cricket and often bats at the top order to use the powerplay conditions.

His batting style is "fearless" in Twenty20 cricket. However, he is also associated as someone reckless and often criticised for choosing the wrong balls to play his shots and playing shots too early in the innings. The cricket experts and former captains such as Sunil Gavaskar and Kapil Dev have criticised him for his lack of consistency.

Samson has been a force to reckon with in the IPL. He has scored 3,526 runs from 138 games throughout a nearly ten-year career, with a strike rate of 135.7, including three centuries and 17 half-centuries. In 2021, Samson became only the third Indian after Rahul Dravid and Ajinkya Rahane to captain Rajasthan Royals. His 2021 and 2022 seasons are his best by his standards, as he scored 450+ runs in both seasons and led the side to the playoffs for consecutive seasons. However, his T20Is are not as fruitful as his IPL career.

In 16 T20Is, Samson has scored 296 runs at an average of 21.1 with just one half-century. Hence, he has been dropped from the Indian squad multiple times and is not a preferred choice due to no dearth of wicketkeeper batters such as Rishabh Pant, KL Rahul and Ishan Kishan. Given Sanju’s fan following, his fans troll Indian selectors and team management for leaving him out of T20 Squad or playing XI. Some even suggested he leave the country and play for some other nation.

We believe that Sanju has potential and needs to be smart enough while applying himself in the international arena. He must give himself more time before deciding to go bowling. Also, we believe he needs to be backed by Indian selectors for his sheer talent and excellent performance in the domestic tournaments and IPL seasons. Sanju has a tough road ahead, and inconsistency in his performances will not help his cause while competing with Rishabh and Ishan.

Antoine Griezmann: Underrated wunderkind yet to show his worth