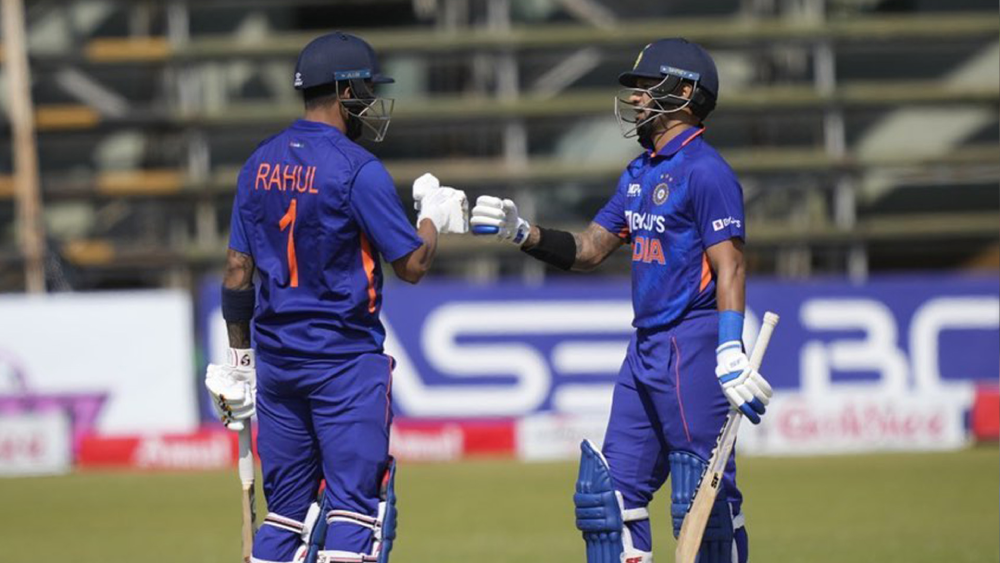 
India’s team has undergone a surprise alteration thanks to BCCI ahead of the three-match ODI series against Zimbabwe. KL Rahul has taken over as the team’s captain instead of Shikhar Dhawan. However, concerns have been raised about this board decision. KL Rahul has yet to record a victory while serving as captain. Shikhar Dhawan has led to victories over Sri Lanka and the West Indies at the same time.

Rahul was awarded the captaincy in lieu of Dhawan for the Zimbabwe tour when he was healthy because the Indian Cricket Board has kept him as the deputy in all three formats to Rohit Sharma. Under Rahul’s leadership, the team was defeated in all four of India’s international cricket games, including three One Day International games and one Test.

Dhawan led the Indian team through six ODIs, with five of those matches ending in victories. Dhawan, has also led the team in three T20 international cricket matches, with a record of one victory and two defeats.

Better is Dhawan’s track record. In July last year, Dhawan led the Indian team for the first time. Additionally, he led the group on the most recent ODI trip to the West Indies. India won the three-ODI series against West Indies 3-0 while defeating the Caribbean nation 2-1. Last year's T20 series saw the Indian team lose 1-2 to Sri Lanka.

In Rohit Sharma’s absence during the Indian team’s January tour of South Africa, Rahul served as team captain for the first time. India was forced to lose all three One-Day Internationals it played against South Africa while he was in charge. In the second Test of this trip, Rahul took over as captain for the first time in Test cricket when Virat Kohli was unable to play due to injury, but India lost by seven wickets. This raises a lot of questions about KL Rahul. After February of this year, Rahul did not participate in another international match. He was supposed to participate in the series against West Indies but was unable to do so after testing positive for COVID-19.

However, Saba Karim, a former India selection committee member was not pleased with the BCCI and their choice of giving KL Rahul the captaincy duties over Shikhar Dhawan for the ongoing series against Zimbabwe. “KL Rahul should have participated in the series solely as a member; whether he served as captain or vice-captain is less significant. He returns after a lengthy absence. Senior player Shikhar Dhawan has performed well in white-ball cricket. Once you announce yourself as captain, you must accord him prominence”, were the thoughts of a frustrated figure in Karim.

KL Rahul had been given the all-clear by the BCCI medical staff to take part in the three-ODI tour of Zimbabwe. Rahul, assisted by Shikhar Dhawan, was selected as the captain for the brief visit.

Due to many health difficulties, he has missed the last six months of international cricket. And this was evident in his performances as he struggled to establish himself and leave his mark against weak opposition. Rahul did not perform with distinction and was only mediocre during the entire tour (batting-wise).

Even though Shikhar Dhawan, a senior colleague, was chosen ahead of him to captain the squad, the selection committee had hoped for a more commanding performance. Even though it was KL Rahul’s maiden series victory and they easily defeated their opponents, it did little to enhance the player’s reputation as a great leader in the eyes of the viewers.

Given that he is deputy and vice-captain to India’s RG Sharma, the player will undoubtedly have more possibilities to succeed in the years to come as the country searches for a leader with a stable mindset to take forward such heavy duties on their shoulder.

KL Rahul will look to cement that role over his teammate, Shikhar Dhawan, who has so far come out with flying colours when given the chance to lead the side. The struggle for spots in the Indian squad has always been well-known to the world, but now supporters, watchers, and enthusiastic sports fanatics will also be following the competition for who will lead the team with great interest.