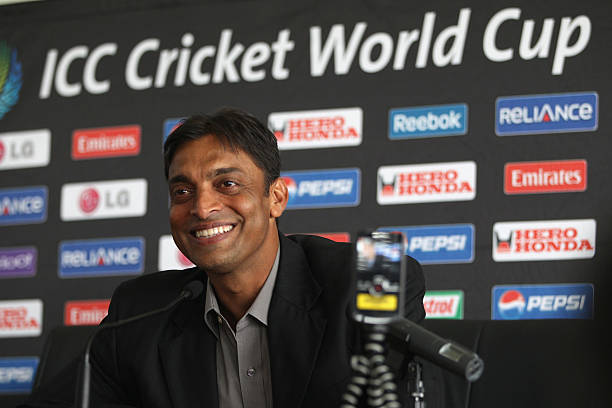 
Rarely in cricket history has an image evoked so many emotions as seeing a certain Shoaib Akhtar beginning his endlessly long run-up from close to the boundary rope. His traditional full-sleeved green shirt from Pakistan was folded up to the elbow to improve the mobility of his arm action. He moved slowly before finally shifting into high gear, his long hair flapping in the wind like sails and his eyes burning with a single goal: to destroy the batter's self-assurance or career.

Generational markers from Sachin Tendulkar to Ricky Ponting, from Rahul Dravid to Kumar Sangakkara have all tried. You could throw an uppercut and take advantage of the momentum of his delivery, similar to Tendulkar. Or block his fuller stuff with the patience of an ox, like Dravid, or try to get the better of him and pull him for a six, like Ponting. Or even anticipate the line and drive him through the covers, like Sangakkara.

But even the master wielders of the willow only found success so often, and it was few and far between. Fear is the mind-killer, especially the lethal pace that made Akhtar’s career an enigma of rich proportions. Much like the unspeakable terror of the Dark Lord Sauron that gripped Middle Earth during the events of Tolkien’s Lord of the Rings, the idea of facing the Rawalpindi Express running at full steam was enough to cause a batter’s dismissal more than the delivery itself.

When he first burst onto the scene as a wide-eyed 22-year-old built like a machine and with the charisma of a stage performer, it didn’t take long for the world of cricket to anticipate the highs his career would take. Following a rich line of a legacy left by Wasim Akram and Waqar Younis, even from the get-go, Akhtar combined brutal pace with an astonishingly confident attitude. He knew he was the fastest bowler in the world and made sure everyone knew that too.

Akhtar seemed to be at the peak of his godly powers before and during the turn of the millennium. He could beat even the best of the best for pace and power. His legendary battles with Rahul Dravid and Sachin Tendulkar in feisty and ill-tempered encounters between India and Pakistan proved to be the blockbuster affair in cricket during those years.

The year 2003 also proved to be legendary not only for Akhtar’s career but in the larger scheme of things, a before and after a moment in fast-bowling history, if you will. During the World Cup encounter against England in South Africa in February, the Rawalpindi Express put an unsuspecting Nick Knight through the wringer.

Bowling the fourth over, he constantly bowled deliveries over 155 km, increasing the pace by a tad bit until he reached the final delivery. Knight became the first batter to face a 100 mph delivery in international cricket as he could only flick it towards mid-wicket and get out of the way. The crowd in Cape Town were up on their feet as Shoaib Akhtar became the first and only bowler in history to breach the 100 mph landmark (161.3 km).

Funnily enough, this wasn’t the first time Akhtar had clocked the 100 mph milestone. Playing an ODI against New Zealand nearly a year ago, he bowled a 161.3 mph delivery to Craig McMillan. However, much to the dismay of cricket fans, the speed gun utilised during the match was sponsored, and the International Cricket Council refused to acknowledge the feat due to apprehensions surrounding the technology.

Despite his Thunderball delivery against New Zealand not being included in the history books, Akhtar being the larger-than-life character that he was, simply shrugged it off. The 100 mph barrier has pretty much been the benchmark for fast bowlers across the world since. Brett Lee, Shaun Tait, Mitchell Starc, Mitchell Johnson, Shane Bond, Mohammad Sami and Mohammad Asif have all come close and failed. The incredible record of Akhtar has stood the test of time and is likely to remain that way.

Akhtar’s brash attitude and personality, which had been deemed unsportsmanlike from the outset, perhaps, fuelled his constant search for perfection and speed. However, a cruel twist of fate also resulted in his downfall.

Constant scuffles with the Pakistan Cricket Board, often on legal grounds, fights and physical altercations with teammates and indiscipline and misdemeanour off the pitch were associated with Shoaib Akhtar throughout his entire career.

Questions regarding his bowling action, ball-tampering offences, heavy fines and longer bans seeped into his career and started taking a deplorable toll. Then there were injuries as his body went to extreme mechanical and physical lengths in the search for more and more speed.

The final nail in the coffin of Akhtar’s legacy arrived following the allegations of doping offences. Akhtar was expelled from the sport together with Asif after it was determined that he tested positive for the performance-enhancing drug nandrolone.

Although the charges eventually cleared after lengthy trials and tribulations during which the Pakistan Olympic Association, International Cricket Council, World Anti Doping Agency, and ultimately the Court of Arbitration also got involved, the damage had been done.

From the hero of Pakistan who stretched his wings out to celebrate like the aeroplane of a bowler he was after taking wickets to a national disgrace and a traitor, Akhtar’s career soon hurtled into the land of what-could-have-been and if-only. Such was his frivolous life and career that the Rawalpindi Express’ fierce pace and genius are now synonymous with controversies and scandals.

While there have been sportsmen who have pushed the boundaries of rationale and the perception of moral judgements before, it is fair to say that the scrapes off the field ended up eclipsing the achievements on it and became a damning indictment of Shoaib Akhtar’s legacy in the sport.