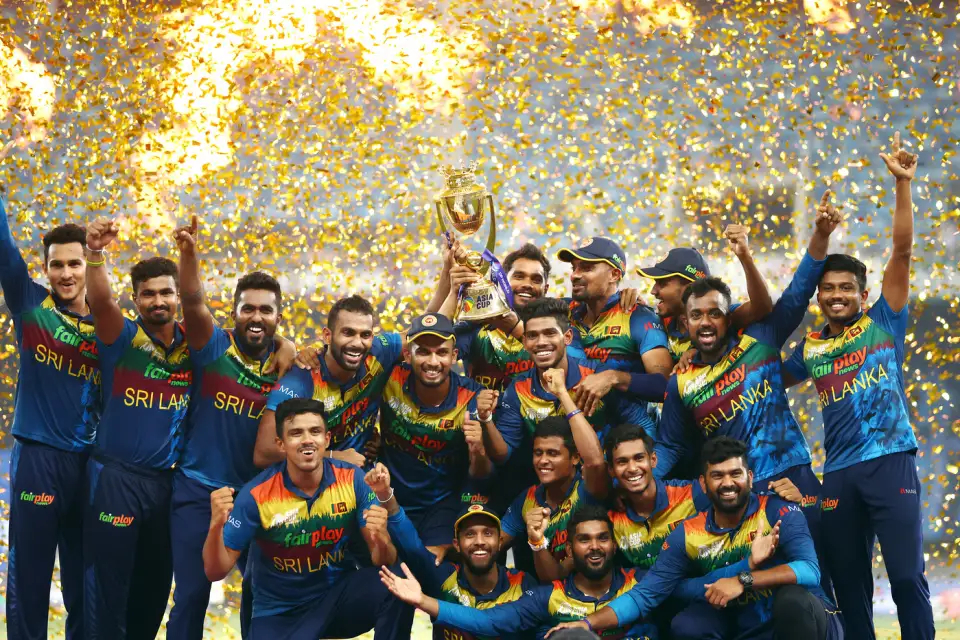 By Plaban Saikia
The Asia Cup was played against a backdrop of an economic collapse and government upheaval in Sri Lanka, the host country, which was why it was moved to the UAE. Upon their unheralded victory over Pakistan, SL Captain Dasun Shanaka said, “With the crisis happening back home, this is a tough time for all the Sri Lankans, but hope we brought some smiles on the faces of our people. This is to the whole nation. They were waiting for this for so long."
They were battered in their opening match by Afghanistan, chasing down the 105 runs they put on the board with ease. They just got past the 183 targets Bangladesh set in the final over. Latching onto some form, they chased down back-to-back 170+ totals in their Super Four matches vs Afghanistan and India to seal a final with Pakistan. They even beat Pakistan in their final Super Four match by five wickets. Still, they were the underdogs going into the final at the Dubai Sports City Cricket Stadium.
They lost the toss first up. The chances of winning for teams batting first in Dubai were 22% in the last 20 months. Only twice teams won batting first in the tournament, both times by India, defending scores only above 190. As such, Pak skipper Babar Azam asked them to bat first. And they got off to a poor start, losing Kusal Mendis for a duck in the first over. The other opener, Pathum Nissanka, got out a couple of overs later, scoring just eight runs. In the final over of the powerplay, they also lost the wicket of Danushka Gunathilaka. Dhananjaya De Silva held up one end of the strike, scoring 24 of the 36 runs put on the board by the Lankans.
Sri Lanka was left staggering at 58-5, losing both Dhananjaya and the captain Shanaka in consecutive overs. At the 10th over mark, their scorecard read 67-5, and the projected score was barely touching 130. But Rajapaksa and Hasaranga gave the innings the much-needed boost they needed by putting together a 58-run partnership in just 36 balls for the 6th wicket, which included eight fours and a six.
Hasaranga was about to bat in the final five overs when Haris Rauf launched an attack, caught him behind, and concluded with a spell of 3-29. Sri Lanka was still far off a decent 1st innings score. Rajapaksa took over the mantle and scored 34 runs off his last 17 balls to bring up his 50 and help Sri Lanka to a respectable total of 170 for 6.
Madushanka had a horrific opening over sending down five illegitimate deliveries before the first ball was counted. The Pak score after the 1st ball was 10-0. He recovered after letting only two runs off the next five balls. Mystery spinner Theekshana kept it tight from the other end, giving away just four runs. Madushanka gave only four off his second over before Pramod Madushan pegged Pakistan back with two wickets in two consecutive balls. The Lankan bowlers kept up the pressure throughout the powerplay and in the middle overs by not letting Rizwan and Iftikhar score at just seven runs an over.
Madushan came back to bowl in the 14th over and managed to get Iftikhar to hole out at deep square leg, trying to increase the run rate. With 70 runs needed off the final five overs, captain Shanaka threw the ball to Karunaratne, who promptly got Mohammad Nawaz out caught in the deep. In the meantime, Mohammad Rizwan completed his fifty with a 6 over midwicket in 46 balls. The required rate was over 15 at this point.
Allrounder Hasaranga came in to bowl his final over of the spell in the 17th over. He had done well until this point in his three overs, allowing only 25 runs, which is a decent spell of spin bowling on its own. But in keeping with his perfect day with the bat, he picked three wickets in the over to put in a match-winning performance. First, he tossed a full one to Rizwan and had him caught at deep midwicket. Then he sent packing the dangerous Asif Ali with a googly which crashed into his middle stump. And finally, had Khushdil slice one up to short third man to finish with a spell of 3-27.
Needing almost 20 runs per over with just three wickets in hand, Pakistan had all hopes pinned on Shadab Khan, but Theekshana had him caught in the covers of his final delivery of the spell. Madushan came next to finish his spell and added another wicket to his tally of 3. He erred in his last two deliveries, first a no ball and then a wide ball and had 13 runs scored off them. He finished with a spell of 4 for 34. With 32 runs to defend in the final over, Karunaratne finished the innings by taking the final wicket on the last ball to bundle Pakistan out for 147 and spark celebrations among the Lankan camp.
Sri Lanka overcame multiple obstacles to win the 6th Asia Cup trophy. And it was an all-hands-on-deck performance from the team. Whenever they needed a hero, they found it. It was a much-needed win for the country suffering from economic and political hardships in recent times.