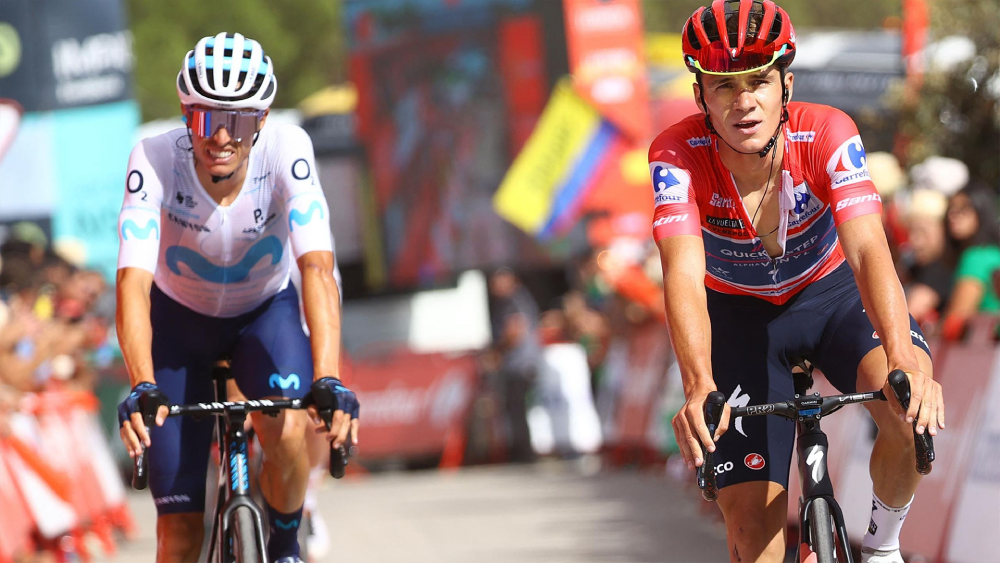 
2022  Vuelta an España has been a thoroughly exciting affair filled with exciting charges, excellent team performance and one rider who has persevered above all and now looks confident to break the hegemony that has been prevailing over this prestigious event for the last several years.


As the dust settles on his Stage 18 victory at La Vuelta A España,  Remco Evenepoel (QuickStep-AlphaVinyl) must be feeling a strong sense of satisfaction.


The Final Grand Tour of the season is always a taxing ordeal, pushing already tired riders to their absolute breaking points.


Evenepoel’s closest competitor in the race, Primoz Roglic, can bear testimony to this. The Jumbo-Visma rider, who had won the last three editions of this prestigious event had to withdraw from the race after Stage 16, having suffered an unfortunate injury in a chaotic stage. Roglic, who stood second behind Evenepoel in the GC for much of the race, will have much to lament, losing a chance at winning four consecutive Vuelta in an instant.

In the Queen stage at the Sierra Nevada in Stage 15, Evenepoel looked there for the taking. Roglic and Enric Mas (Movistar) both gained time on him and looked to close the gap between them and Red Jersey. However, Evenepoel dug deep to defend his lead and limited his loss to only 15 seconds over Roglic, maintaining a psychological advantage over his adversaries.


Many anticipated the leader to cruise through the following stage since the climbs were getting easier in the third week and because they had a rest day.


Stage 16 seemed to be going according to plan for the young Belgian until he suddenly seemed to be slowing down with about 6km left in the day. Roglic and his team Jumbo-Visma wasted little time attacking this window of opportunity. Roughly 2.6km from the gently ascending road to the finish, he accelerated clear. Meanwhile, Evenepoel expertly guided his cycle within the 3km threshold before signalling that he had a puncture.


There was one last twist in the breathless finale at Tomares. When Roglic, who had been carrying an 8-second lead with him, crashed into the wheels of Fred Wright (Bahrain Victorious). Roglic looked in significant discomfort at the finish, sitting by the side, moving gingerly. He was still visibly affected when Evenepoel crossed the finish line nearly 3 minutes later.


Evenepoel had once again maintained his lead in adverse circumstances and limited his losses to only 8 seconds. Roglic was absent at the start of Stage 17, and he later withdrew from the race to preserve his health for the remaining few weeks of the season.


Evenepoel retained his position atop the General Classification rather convincingly in Stage 17, extending his lead over second-place rider Enric Mas (Movistar) to more than 2 minutes. This put to rest any concerns about Evenepoel's form following two shaky stages.


The centre of attention for this stage was the veteran Colombian Rigoberto Uran. The 35-year-old claimed his first Grand Tour victory since 2017, as he prevailed in a back-and-forth battle among the breakaway riders. The stage witnessed a thrilling conclusion, with Lawson Craddock (BikeExchange-Jayco) caught in the final kilometre before a Jesùs Herrada (Cofidis) attack looked to seal the win at 850 metres from the summit. Uran, a revered veteran and a beloved rider, savoured the victory and looked moved by the raucous applause he received from the riders and the fans.


Stage 18 of La Vuelta was denoted by Remco Evenepoel’s second stage victory of the Grand Tour as he moved closer to his first La Vuelta victory. He outsprinted Enric Mas on a tumultuous day, looking utterly unfazed by some aggressive long-range attacks by the Team UAE Emirates.


Evenepoel has all but secured his place atop the Youth Classification and barring any significant mishaps should have a comfortable path to victory with only three stages remaining in the final Grand Tour of the year. If he does that, he will stamp his credentials as one of the best young riders in a field replete with talent. He has persevered through every challenge in this Vuelta, it looks unlikely that he will slip up now.