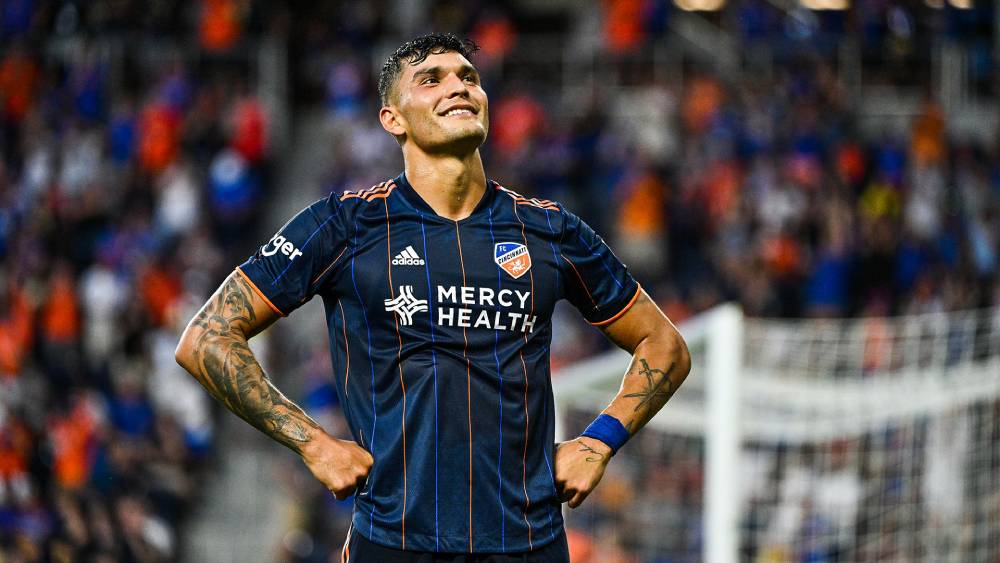 
This season has seen FC Cincinnati’s 23-year-old striker Brandon Vázquez set the MLS alight. The former USMNT U-20 international seems to have finally found his feet at the top level in the US this year.

Until arriving in Cincinnati, Vázquez had somewhat of a stop-start beginning his senior career. Having come through the youth set-up at Tijuana in Mexico, the American youth striker moved to Atlanta United in the MLS in 2017, where he would spend two years with limited game time and a year-long spell with the second team in the USL Championship. More of the same followed when he moved to Cincinnati until, finally, this season, Vázquez has nailed down a place in the starting line-up after impressing towards the end of 2021.

Vázquez has notched an impressive 15 goals this season and four assists in just 24 games for a mid-table Cincinnati side. At just 23, the young striker has years ahead of him to develop but is already taking on responsibility at Cincinnati, contributing 45% of the team’s goals this season. He is the second top scorer in the league behind Austin FC’s Sebastián Driussi (17 goals).

Vázquez was also selected for this year’s MLS All-Star game, making it clear that he is creating a buzz around the league. Cincinnati’s sharpshooter is also gathering traction outside of the US, with multiple sources reporting that Vázquez has attracted the interest of Leeds United in the Premier League.

Standing at 1.88m (6’2”), Vázquez is a tall, physical type striker who can use his body to shield the ball and hold up the play. His ability to bring other players into the game has become a strength in his game. The former US youth striker is a strong finisher in front of a goal and excels in aerial duels. His smart movement in and around the box and constantly making himself available for a cutback or cross to the back-post makes Vázquez a tricky customer.

Along with his offensive skills, Vázquez is no pushover in the press and, in the previous 365 days, according to FBref, ranks 82nd among MLS forwards in pressures per 90. Vázquez is in the 83rd percentile for aerial duels won per 90 and the 95th percentile for non-penalty goals per 90.

So, the question is, why should Gregg Berhalter include Vázquez in his World Cup squad and who is his competition at the striker spot?

As previously mentioned, the San Diego native is in the form of his admittedly short career as of late and will be as confident as ever. With the World Cup’s adapted schedule this year, Vázquez will have had a chance to rest after the MLS season, which finishes in early October and will hopefully be fighting fit and ready for the beginning of the tournament in late November.

Vázquez is yet to make a senior appearance for his country, and with just two international games left before the World Cup, Berhalter may see him as too inexperienced. However, the young striker brings something to the table that the US team lacks, a focal point up front who can lead the line and bring others.

This is due in part to the unfortunate injury record of Daryl Dike, who can lead the line and use his stature to bully defenders in his own right. Given that Dike is side-lined, Vázquez becomes the automatic option for a player of his ilk and would be a welcome addition to the US team. With Ricardo Pepi, and Josh Sargent Tim Weah struggling for goals of late, the striker spot is certainly up for debate. Both Sargent and Weah offer Berhalter more versatility in that they can also operate from the wing, which is useful for the US’s 4-3-3 formation.

One player that offers Vázquez some competition is fellow MLS striker Jesus Ferreira, who already has 13 appearances for the national team and seven goals to his name. Ferreira is the joint-second top scorer this season in the MLS with Vázquez and is just 21 years old.

If Vázquez keeps scoring at his present rate, it's difficult to imagine him not reserving a spot on the flight to Qatar in November, given that the squad has space for more than just one striker. The youthful striker provides Berhalter with a fresh approach to the attack and the chance to go direct in a game when necessary, either as a starter or a replacement. Vázquez is becoming difficult to overlook because of his physical characteristics, finishing prowess, and hold-up abilities.