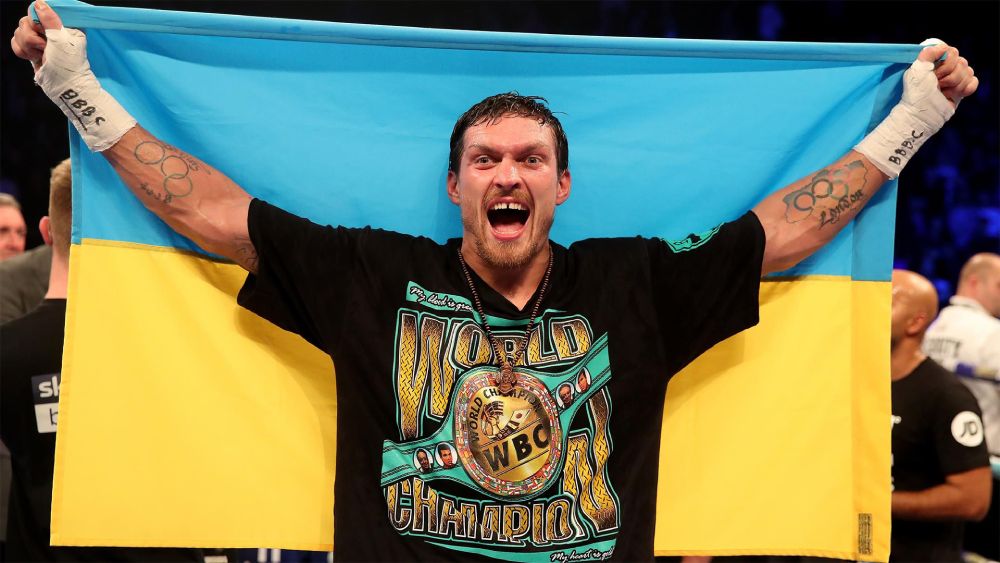 Oleksandr Usyk has an incredible boxing record that reflects his immense boxing talent. He was born in Simferopol, Crimean Oblast, and began his boxing career at 15. Usyk has a remarkable amateur record of 335-15 since switching to boxing in his mid-teens.

His career at the amateur level was a huge success achieving almost everything within his realm. Starting his career in the Middleweight division, he grew into his potential and gradually became a noteworthy amateur Heavyweight. In particular, Usyk was victorious by being crowned with gold medals at the 2011 world championships and the London 2012 Olympics, leaving the boxer with only one choice, to turn professional.

Nicknamed ‘The Cat’, his boxing style constitutes slick movement, agility, and the ‘pawing’ jab. The Ukrainian-born boxer has been praised for his clinical boxing style and is arguably one of the best boxers in the industry due to his fluid style. His southpaw stance also causes most opponents problems due to uncertainty and having to tactically cope with a fighter who moves in reverse of the norm.

His atypical stance for a boxer would make you think that his lead hand is the stronger of the two, which is the case. However, thanks to his extensive amateur career, he has learnt the techniques to use his weaker left hand to his advantage whilst using his other hand to keep his opponent at a comfortable distance. His ability to perform a range of strikes as opponents pay too much attention to his poking jab, unknowing of his left hand about to deliver a blow.

One of the methods Usyk uses to control his opponent is his incredible footwork – a skill that has been heavily attributed to his success. He can maintain distance between himself and his opponent by using his jab and controlling himself in the centre of the ring. His footwork puts him on the front foot in his fights as he can move out the way, gauge and block punches and counter their movement with brutal strikes. The 35-year-old’s giant size combined with his sharp yet intense movement is, at times, unfightable. Fundamentally, his style, having trained in the Ukrainian boxing system, is not described as exciting as his intelligence helps him to be dangerous and clinical.

The Ukrainian’s professional career began in 2013 when he joined the cruiserweight division. On his professional debut, Usyk managed to secure a devastating fifth-round knockout. He continued this form in the following fights, beating Epifanio Mendoza, Ben Nsafoah and Cesar David Crenz.

The boxer attracted attention as he started to advance in the sport. In October 2014, he won his first championship-winning WBO Inter-Continental cruiserweight belt. Two title defences followed in the next couple of years which saw Usyk hold on to his title. Usyk had one thing in his mind- to fight for the WBO title. And the continued success of the boxing giant meant that the opportunity had to be right around the corner. This opportunity arose in June 2016 as Polish boxer Krzysztof Glowacki would put his title on the line – a fight that went the distance and saw Usyk outpoint Glowacki. Usyk retained his WBO cruiserweight three times following his fight against Glowacki. TKOs against Thabiso Mchunu and Marco Huck and a unanimous decision against Michael Hunter saw him becoming one of the most successful fighters in the world.

He was focused and knew what the end goal was. He wanted to be the undisputed heavyweight world champion, and no one could stop him. He had the WBO belt but was sniffing around, urgently looking to gain the WBC, WBA, and IBF cruiserweight titles.

A majority decision victory gained Usyk the WBC cruiserweight title. A fierce but competitive contest changed in round five when Usyk began to take control and held out whilst still taking massive blows. Still, to this day, Usyk says this was the hardest fight of his career, with Briedis being accurate and precise with his punches. He would then go on to fight Murat Gassiev to become the undisputed cruiserweight champion, and he did this in an emphatic style typical of the Ukrainian. According to reports, Usyk outclassed Gassiev and, as a result, dominated the exchange between the two. The result was never in question. This win was for the history books – Usyk became the first ever four-belt undisputed cruiserweight champion. In charismatic style, Usyk called out Tony Bellew, claiming that he would gladly move up a weight category – and that he did.

Usyk took Bellew is about to defend his Cruiserweight titles for the last time. Following his victory over Bellew, Oleksandr Usyk undoubtedly overcame the cruiserweight division and left swiftly looking for a new challenge. He moved up a weight to become a heavyweight fighter with the likes of Chisora, Joshua and Tyson Fury in his foreseeable sight.

In unusual circumstances, Usyk competed in his heavyweight debut against Chazz Witherspoon as his original opponent was found doping days before the fight. Usyk won the contest after his opponent retired in the seventh round. In London was Usyk’s next fight – former world title challenger Derek Chisora was next on Usyk’s list, with the winner becoming first in line to fight Joshua for the WBO heavyweight title. The event was postponed till October 2020. When the two fighters finally came to blows, Usyk wore Chisora down to win unanimously. His post-fight interview lit the world alight as he called out Anthony Joshua.

His most recent victory in the ring came against Anthony Joshua, with Usyk winning by a unanimous decision. Many pundits doubted Usyk to have either the size or power to finish such a powerhouse like Joshua, but he disbanded him with his quick feet and calculated throws. Almost immediately after the bout, Joshua’s team demanded a rematch, and they took pen to paper to arrange this event as soon as possible. The unified heavyweight champion would never turn down such an opportunity.

The rematch between the Ukrainian and the adored Anthony Joshua is closer than you might imagine. Joshua will try to take Usyk's WBA, WBO, and IBF championship belts, but his motivation is to get retribution.